Subscribe
8 constRuction kicks off saudi Recycling effoRts Saudi Arabia is preparing to start work on a recycling facility that will process construction and demolition waste into aggregates for roads and concrete applications for a major resident...
Read the entire page 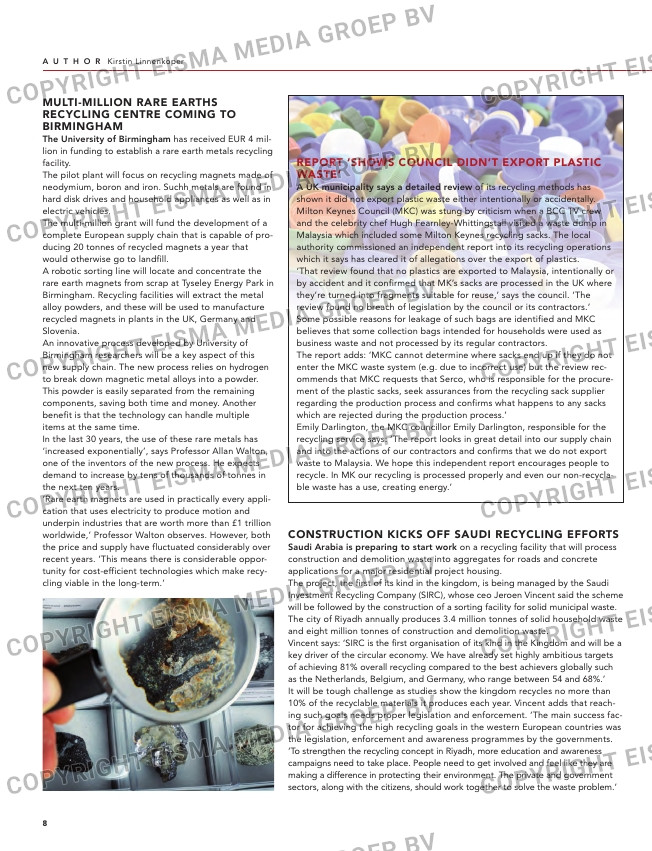 constRuction kicks off saudi Recycling effoRts
Saudi Arabia is preparing to start work on a recycling facility that will process
construction and demolition waste into aggregates for roads and concrete
applications for a major residential project housing.
The project, the first of its kind in the kingdom, is being managed by the Saudi
Investment Recycling Company (SIRC), whose ceo Jeroen Vincent said the scheme
will be followed by the construction of a sorting facility for solid municipal waste.
The city of Riyadh annually produces 3.4 million tonnes of solid household waste
and eight million tonnes of construction and demolition waste.
Vincent says: ‘SIRC is the first organisation of its kind in the Kingdom and will be a
key driver of the circular economy. We have already set highly ambitious targets
of achieving 81% overall recycling compared to the best achievers globally such
as the Netherlands, Belgium, and Germany, who range between 54 and 68%.’
It will be tough challenge as studies show the kingdom recycles no more than
10% of the recyclable materials it produces each year. Vincent adds that reach-
ing such goals needs proper legislation and enforcement. ‘The main success fac-
tor for achieving the high recycling goals in the western European countries was
the legislation, enforcement and awareness programmes by the governments.
‘To strengthen the recycling concept in Riyadh, more education and awareness
campaigns need to take place. People need to get involved and feel like they are
making a difference in protecting their environment. The private and government
sectors, along with the citizens, should work together to solve the waste problem.’

multi-million RaRe eaRths
Recycling centRe coming to
biRmingham
the University of Birmingham has received EUR 4 mil-
lion in funding to establish a rare earth metals recycling
facility.
The pilot plant will focus on recycling magnets made of
neodymium, boron and iron. Suchh metals are found in
hard disk drives and household appliances as well as in
electric vehicles.
The multi-million grant will fund the development of a
complete European supply chain that is capable of pro-
ducing 20 tonnes of recycled magnets a year that
would otherwise go to landfill.
A robotic sorting line will locate and concentrate the
rare earth magnets from scrap at Tyseley Energy Park in
Birmingham. Recycling facilities will extract the metal
alloy powders, and these will be used to manufacture
recycled magnets in plants in the UK, Germany and
Slovenia.
An innovative process developed by University of
Birmingham researchers will be a key aspect of this
new supply chain. The new process relies on hydrogen
to break down magnetic metal alloys into a powder.
This powder is easily separated from the remaining
components, saving both time and money. Another
benefit is that the technology can handle multiple
items at the same time.
In the last 30 years, the use of these rare metals has
‘increased exponentially’, says Professor Allan Walton,
one of the inventors of the new process. He expects
demand to increase by tens of thousands of tonnes in
the next ten years.
‘Rare earth magnets are used in practically every appli-
cation that uses electricity to produce motion and
underpin industries that are worth more than £1 trillion
worldwide,’ Professor Walton observes. However, both
the price and supply have fluctuated considerably over
recent years. ‘This means there is considerable oppor-
tunity for cost-efficient technologies which make recy-
cling viable in the long-term.’

RepoRt ‘shows council didn’t expoRt plastic
waste’
A UK municipality says a detailed review of its recycling methods has
shown it did not export plastic waste either intentionally or accidentally.
Milton Keynes Council (MKC) was stung by criticism when a BCC TV crew
and the celebrity chef Hugh Fearnley-Whittingstall visited a waste dump in
Malaysia which included some Milton Keynes recycling sacks. The local
authority commissioned an independent report into its recycling operations
which it says has cleared it of allegations over the export of plastics.
‘That review found that no plastics are exported to Malaysia, intentionally or
by accident and it confirmed that MK’s sacks are processed in the UK where
they’re turned into fragments suitable for reuse,’ says the council. ‘The
review found no breach of legislation by the council or its contractors.’
Some possible reasons for leakage of such bags are identified and MKC
believes that some collection bags intended for households were used as
business waste and not processed by its regular contractors.
The report adds: ‘MKC cannot determine where sacks end up if they do not
enter the MKC waste system (e.g. due to incorrect use) but the review rec-
ommends that MKC requests that Serco, who is responsible for the procure-
ment of the plastic sacks, seek assurances from the recycling sack supplier
regarding the production process and confirms what happens to any sacks
which are rejected during the production process.’
Emily Darlington, the MKC councillor Emily Darlington, responsible for the
recycling service says: ‘The report looks in great detail into our supply chain
and into the actions of our contractors and confirms that we do not export
waste to Malaysia. We hope this independent report encourages people to
recycle. In MK our recycling is processed properly and even our non-recycla-
ble waste has a use, creating energy.’