Subscribe
papermarket analysis prices stay low in Us and europe Pratt’s new Ohio plant, opened by President Trump, has been a bright moment for a sector struggling with lower prices and little signs of improvement. September provided a gli...
Read the entire page 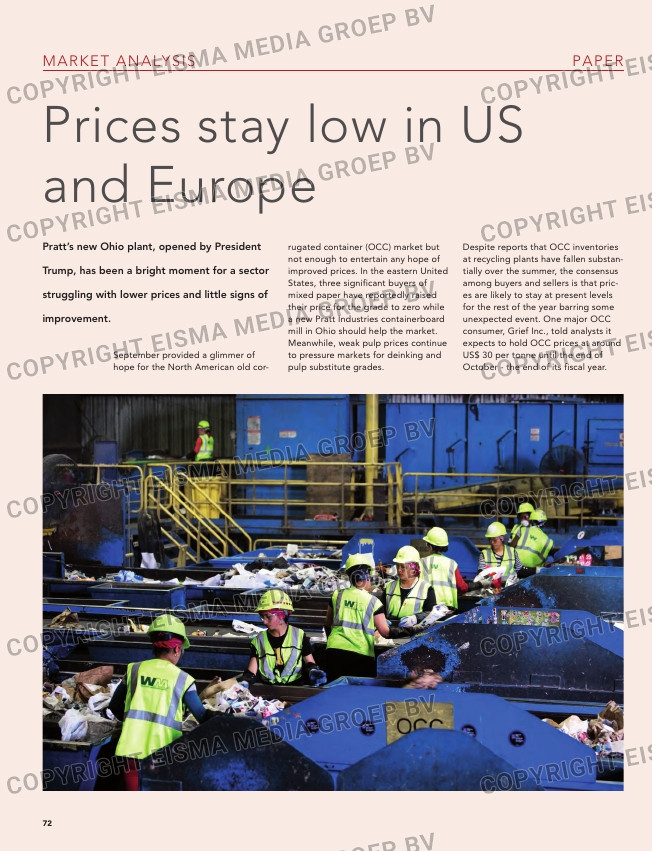 Trump, has been a bright moment for a sector

struggling with lower prices and little signs of

Despite reports that OCC inventories
at recycling plants have fallen substan-
tially over the summer, the consensus
among buyers and sellers is that pric-
es are likely to stay at present levels
for the rest of the year barring some
unexpected event. One major OCC
consumer, Grief Inc., told analysts it
expects to hold OCC prices at around
US$ 30 per tonne until the end of
October – the end of its fiscal year.

rugated container (OCC) market but
not enough to entertain any hope of
improved prices. In the eastern United
States, three significant buyers of
mixed paper have reportedly raised
their price for the grade to zero while
a new Pratt Industries containerboard
mill in Ohio should help the market.
Meanwhile, weak pulp prices continue
to pressure markets for deinking and
pulp substitute grades.

A recycler on the West Coast report-
edly had 4 500 tonnes of OCC
stacked up at the beginning of July
but, according to one broker, the yard
was down to a couple of railcar loads
by the end of August. ‘That’s just one
plant but I’m hearing similar stories all
around the West Coast and the Upper
Midwest,’ the broker says. ‘Demand is
picking up. At the beginning of
September, mills were cutting back on
their orders. Halfway through the
month, they were calling for more
OCC.’
Even so, some of the stockpiled OCC
probably ended up in landfill. ‘You
hear about mixed paper going to
landfills but other grades of paper
were being dumped off as well,’ adds
another broker.

VIsIT By TRUmp
While US mills have consumed less
OCC and other scrap paper grades
this year compared to 2018, mixed
paper consumption is up, with more
capacity coming online. The new Pratt
mill in Wapakoneta, Ohio, which will
be able to recycle close to 400 000