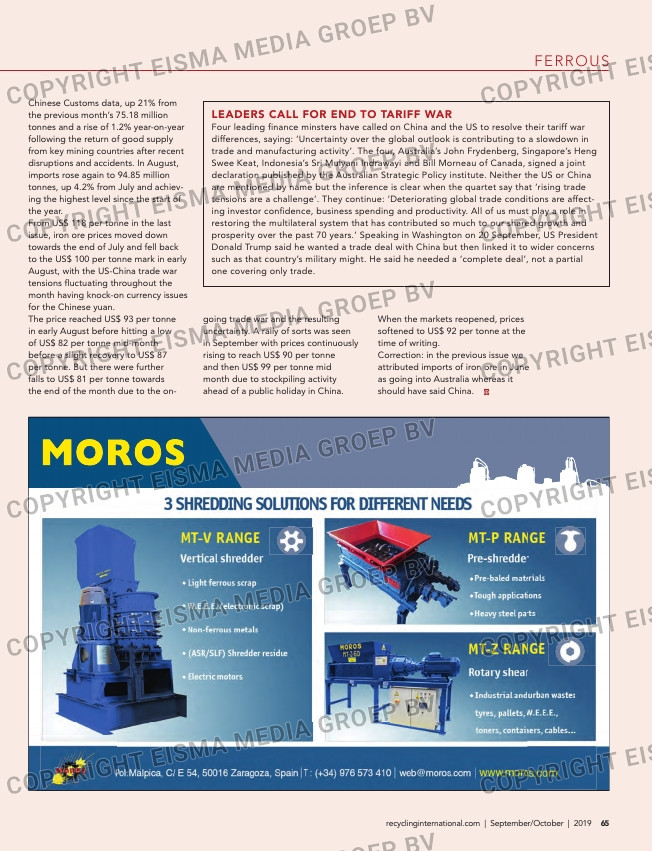 Chinese Customs data, up 21% from
the previous month’s 75.18 million
tonnes and a rise of 1.2% year-on-year
following the return of good supply
from key mining countries after recent
disruptions and accidents. In August,
imports rose again to 94.85 million
tonnes, up 4.2% from July and achiev-
ing the highest level since the start of
the year.
From US$ 118 per tonne in the last
issue, iron ore prices moved down
towards the end of July and fell back
to the US$ 100 per tonne mark in early
August, with the US-China trade war
tensions fluctuating throughout the
month having knock-on currency issues
for the Chinese yuan.
The price reached US$ 93 per tonne
in early August before hitting a low
of US$ 82 per tonne mid-month
before a slight recovery to US$ 87
per tonne. But there were further
falls to US$ 81 per tonne towards
the end of the month due to the on-

LEadERS CaLL FOR End TO TaRIFF waR
Four leading finance minsters have called on China and the US to resolve their tariff war
differences, saying: ‘Uncertainty over the global outlook is contributing to a slowdown in
trade and manufacturing activity’. The four, Australia’s John Frydenberg, Singapore’s Heng
Swee Keat, Indonesia’s Sri Mulyani Indrawayi and Bill Morneau of Canada, signed a joint
declaration published by the Australian Strategic Policy institute. Neither the US or China
are mentioned by name but the inference is clear when the quartet say that ‘rising trade
tensions are a challenge’. They continue: ‘Deteriorating global trade conditions are affect-
ing investor confidence, business spending and productivity. All of us must play a role in
restoring the multilateral system that has contributed so much to our shared growth and
prosperity over the past 70 years.’ Speaking in Washington on 20 September, US President
Donald Trump said he wanted a trade deal with China but then linked it to wider concerns
such as that country’s military might. He said he needed a ‘complete deal’, not a partial
one covering only trade.

going trade war and the resulting
uncertainty. A rally of sorts was seen
in September with prices continuously
rising to reach US$ 90 per tonne
and then US$ 99 per tonne mid
month due to stockpiling activity
ahead of a public holiday in China.

When the markets reopened, prices
softened to US$ 92 per tonne at the
time of writing.
Correction: in the previous issue we
attributed imports of iron ore in June
as going into Australia whereas it
should have said China.