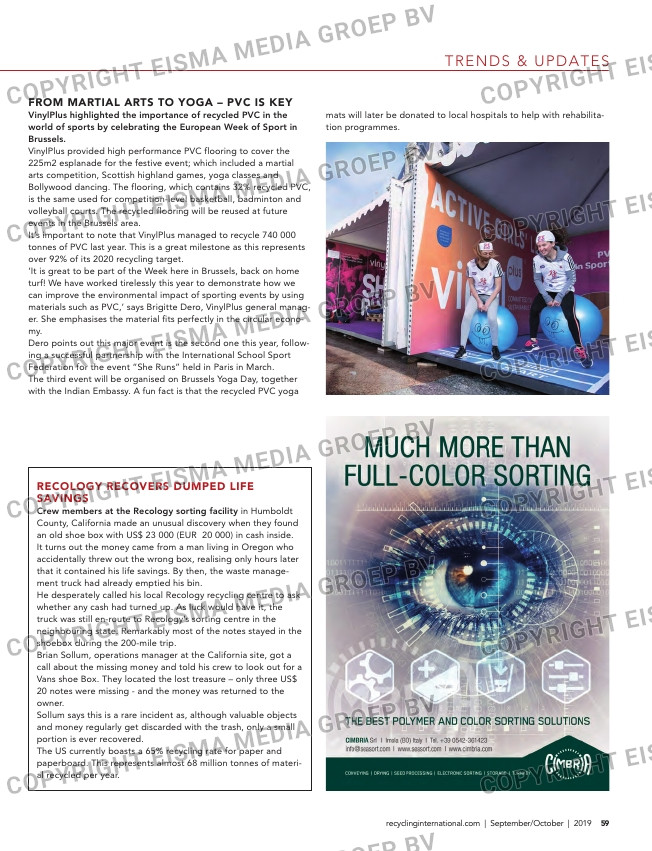 recycle cars as much as caNs
The UK’s largest network of authorised treatment facilities for end-of-life
vehicles says the country’s national Recycle Week is a great opportunity to
emphasise that recycling a car is as easy as recycling a can.
The CarTakeBack network has invested heavily in recycling technology and
equipment and reached the EU’s target of 95% two years early. ‘We are
ahead of the game but we’re not resting,’ a spokesman says. ‘Our goals are
high and they need to be. With 1.8 million cars scrapped every year in the
UK, we know a large proportion are responsibly recycled but if people don’t
make the right choice, the damage is done.’
Vehicle depollution must take place at an authorised treatment facility that
holds an environmental permit. One industry source suggests that as many
as 300 000 end-of-life vehicles could have been handled illegally last year.
The annual Recycle Week, organised by the Recycle Now campaign, runs
from 23-29 September. The slogan this year is ‘Recycling. It’s in our hands’,
taking inspiration from public figures like Sir David Attenborough.
‘Recycling really is in our hands,’ says CarTakeBack. ‘Rinsing out that can
and putting it in the right bin means the public can tick off their recycling
responsibility. But what about that tonne of metal, glass and plastic parked
on the driveway?’
The network says the campaign mantra: ‘Rinse, Crush, Squash, Sort,
Separate’ must apply to more than just the can in the kitchen for the UK to
achieve significant recycling success.
‘While there’s obviously much more to it, recycling a car properly actually
fits pretty neatly into that process. Making sure people know it’s what we
need to achieve for all items, whatever the size, is vital. Can and car!’

recology recovers dumPed life
saviNgs
Crew members at the recology sorting facility in Humboldt
County, California made an unusual discovery when they found
an old shoe box with US$ 23 000 (EUR 20 000) in cash inside.
It turns out the money came from a man living in Oregon who
accidentally threw out the wrong box, realising only hours later
that it contained his life savings. By then, the waste manage-
ment truck had already emptied his bin.
He desperately called his local Recology recycling centre to ask
whether any cash had turned up. As luck would have it, the
truck was still en-route to Recology’s sorting centre in the
neighbouring state. Remarkably most of the notes stayed in the
shoebox during the 200-mile trip.
Brian Sollum, operations manager at the California site, got a
call about the missing money and told his crew to look out for a
Vans shoe Box. They located the lost treasure – only three US$
20 notes were missing – and the money was returned to the
owner.
Sollum says this is a rare incident as, although valuable objects
and money regularly get discarded with the trash, only a small
portion is ever recovered.
The US currently boasts a 65% recycling rate for paper and
paperboard. This represents almost 68 million tonnes of materi-
al recycled per year.

from martial arts to yoga – Pvc is key
VinylPlus highlighted the importance of recycled PVC in the
world of sports by celebrating the European Week of Sport in
Brussels.
VinylPlus provided high performance PVC flooring to cover the
225m2 esplanade for the festive event; which included a martial
arts competition, Scottish highland games, yoga classes and
Bollywood dancing. The flooring, which contains 32% recycled PVC,
is the same used for competition-level basketball, badminton and
volleyball courts. The recycled flooring will be reused at future
events in the Brussels area.
It’s important to note that VinylPlus managed to recycle 740 000
tonnes of PVC last year. This is a great milestone as this represents
over 92% of its 2020 recycling target.
‘It is great to be part of the Week here in Brussels, back on home
turf! We have worked tirelessly this year to demonstrate how we
can improve the environmental impact of sporting events by using
materials such as PVC,’ says Brigitte Dero, VinylPlus general manag-
er. She emphasises the material fits perfectly in the circular econo-
my.
Dero points out this major event is the second one this year, follow-
ing a successful partnership with the International School Sport
Federation for the event “She Runs” held in Paris in March.
The third event will be organised on Brussels Yoga Day, together
with the Indian Embassy. A fun fact is that the recycled PVC yoga

mats will later be donated to local hospitals to help with rehabilita-
tion programmes.