Subscribe
54 ‘NOTHING MUsT BE DIsCARDED IRREsPONsIBLY’ at a conference in rome in July, attended by recycling international, Novamont announced that its Mater-Bi bioplastic fully degraded in marine conditions from between four months and on...
Read the entire page 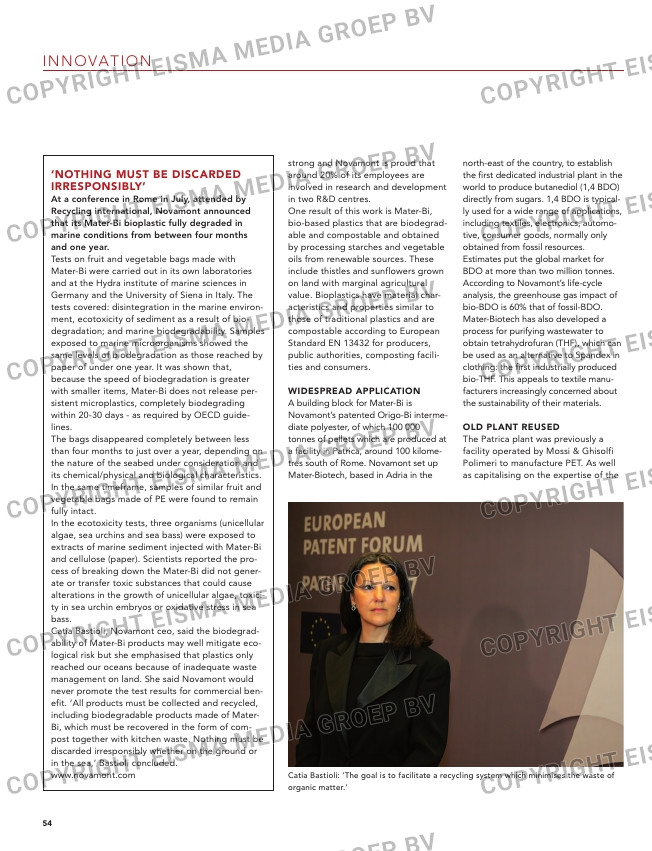 ‘NOTHING MUsT BE DIsCARDED
IRREsPONsIBLY’
at a conference in rome in July, attended by
recycling international, Novamont announced
that its Mater-Bi bioplastic fully degraded in
marine conditions from between four months
and one year.
Tests on fruit and vegetable bags made with
Mater-Bi were carried out in its own laboratories
and at the Hydra institute of marine sciences in
Germany and the University of Siena in Italy. The
tests covered: disintegration in the marine environ-
ment, ecotoxicity of sediment as a result of bio-
degradation; and marine biodegradability. Samples
exposed to marine microorganisms showed the
same levels of biodegradation as those reached by
paper of under one year. It was shown that,
because the speed of biodegradation is greater
with smaller items, Mater-Bi does not release per-
sistent microplastics, completely biodegrading
within 20-30 days – as required by OECD guide-
lines.
The bags disappeared completely between less
than four months to just over a year, depending on
the nature of the seabed under consideration and
its chemical/physical and biological characteristics.
In the same timeframe, samples of similar fruit and
vegetable bags made of PE were found to remain
fully intact.
In the ecotoxicity tests, three organisms (unicellular
algae, sea urchins and sea bass) were exposed to
extracts of marine sediment injected with Mater-Bi
and cellulose (paper). Scientists reported the pro-
cess of breaking down the Mater-Bi did not gener-
ate or transfer toxic substances that could cause
alterations in the growth of unicellular algae, toxici-
ty in sea urchin embryos or oxidative stress in sea
bass.
Catia Bastioli, Novamont ceo, said the biodegrad-
ability of Mater-Bi products may well mitigate eco-
logical risk but she emphasised that plastics only
reached our oceans because of inadequate waste
management on land. She said Novamont would
never promote the test results for commercial ben-
efit. ‘All products must be collected and recycled,
including biodegradable products made of Mater-
Bi, which must be recovered in the form of com-
post together with kitchen waste. Nothing must be
discarded irresponsibly whether on the ground or
in the sea,’ Bastioli concluded.
www.novamont.com

strong and Novamont is proud that
around 20% of its employees are
involved in research and development
in two R&D centres.
One result of this work is Mater-Bi,
bio-based plastics that are biodegrad-
able and compostable and obtained
by processing starches and vegetable
oils from renewable sources. These
include thistles and sunflowers grown
on land with marginal agricultural
value. Bioplastics have material char-
acteristics and properties similar to
those of traditional plastics and are
compostable according to European
Standard EN 13432 for producers,
public authorities, composting facili-
ties and consumers.

WIDEsPREAD APPLICATION
A building block for Mater-Bi is
Novamont’s patented Origo-Bi interme-
diate polyester, of which 100 000
tonnes of pellets which are produced at
a facility in Patrica, around 100 kilome-
tres south of Rome. Novamont set up
Mater-Biotech, based in Adria in the

north-east of the country, to establish
the first dedicated industrial plant in the
world to produce butanediol (1,4 BDO)
directly from sugars. 1,4 BDO is typical-
ly used for a wide range of applications,
including textiles, electronics, automo-
tive, consumer goods, normally only
obtained from fossil resources.
Estimates put the global market for
BDO at more than two million tonnes.
According to Novamont’s life-cycle
analysis, the greenhouse gas impact of
bio-BDO is 60% that of fossil-BDO.
Mater-Biotech has also developed a
process for purifying wastewater to
obtain tetrahydrofuran (THF), which can
be used as an alternative to Spandex in
clothing: the first industrially produced
bio-THF. This appeals to textile manu-
facturers increasingly concerned about
the sustainability of their materials.

OLD PLANT REUsED
The Patrica plant was previously a
facility operated by Mossi & Ghisolfi
Polimeri to manufacture PET. As well
as capitalising on the expertise of the

Catia Bastioli: ‘The goal is to facilitate a recycling system which minimises the waste of
organic matter.’