Subscribe
a u t h o r Robin Latchem 52 Can Mother Nature play a part in plastic recycling? Italian bioplastics specialists Novamont believes low-value oil-based polymers have had their day. then offer genuine end-of-life value and this would...
Read the entire page 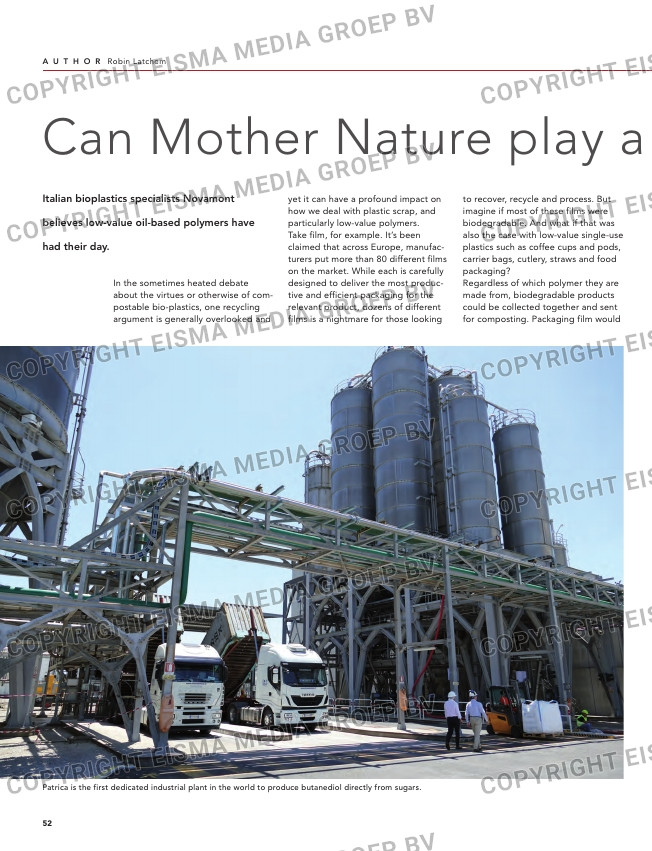 then offer genuine end-of-life value
and this would reduce contamination
when other, more valuable plastics are
being recycled. Major costs for waste
managers and recyclers would there-
fore be avoided.

ELLEN MACARTHUR PARTNER
It’s an alternative promoted by
Novamont, one of the world’s leading
manufacturers of biodegradable, com-
postable bioplastics, and a ‘Core
Partner’ of the Ellen MacArthur
Foundation’s New Plastics Economy
initiative aimed at rethinking plastics
packaging systems globally.
‘Single-use packaging applications
such as films and trays made of com-
postable bioplastics for separate col-
lection with food waste could help to
make the traditional plastic waste
stream substantially cleaner and there-
fore more valuable,’ says Francesco
Degli Innocenti, director, ecology of
products with Novamont. ‘That’s
something PET recyclers would appre-
ciate when confronted with the grow-
ing degree of contamination by lower-
value plastics.’

BETTER FOR RECYCLING?
The wider use of biodegradable, com-
postable plastics concerns recyclers
and policy makers because of cross-
contamination; for example, when
non-biodegradable plastic scrap finds
its way into composting technologies.
The goal has to be for consumers and
businesses to separate plastic scrap
properly but, as we know, people put-
ting the right waste in the right place
is a challenge across all recycling sec-
tors. This article will not rehearse the
arguments in detail but it is about
how a 100%-owned Italian company,
has established an international trade
in offering low-carbon alternatives to
oil-based polymers. And with all the
attention on plastic pollution, it has
the research to back up its claim that

In the sometimes heated debate
about the virtues or otherwise of com-
postable bio-plastics, one recycling
argument is generally overlooked and

yet it can have a profound impact on
how we deal with plastic scrap, and
particularly low-value polymers.
Take film, for example. It’s been
claimed that across Europe, manufac-
turers put more than 80 different films
on the market. While each is carefully
designed to deliver the most produc-
tive and efficient packaging for the
relevant product, dozens of different
films is a nightmare for those looking

to recover, recycle and process. But
imagine if most of these films were
biodegradable. And what if that was
also the case with low-value single-use
plastics such as coffee cups and pods,
carrier bags, cutlery, straws and food
packaging?
Regardless of which polymer they are
made from, biodegradable products
could be collected together and sent
for composting. Packaging film would

Patrica is the first dedicated industrial plant in the world to produce butanediol directly from sugars.