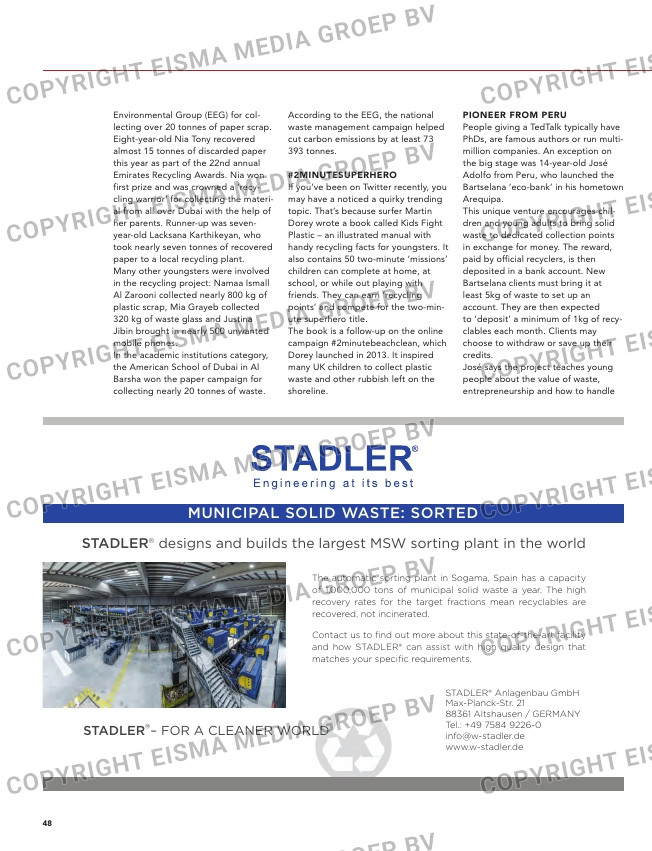 The automatic sorting plant in Sogama, Spain has a capacity
of 1,000,000 tons of municipal solid waste a year. The high
recovery rates for the target fractions mean recyclables are
recovered, not incinerated.

Contact us to find out more about this state-of-the-art facility
and how STADLER® can assist with high quality design that
matches your specific requirements.

STADLER®– FOR A CLEANER WORLD

Environmental Group (EEG) for col-
lecting over 20 tonnes of paper scrap.
Eight-year-old Nia Tony recovered
almost 15 tonnes of discarded paper
this year as part of the 22nd annual
Emirates Recycling Awards. Nia won
first prize and was crowned a ‘recy-
cling warrior’ for collecting the materi-
al from all over Dubai with the help of
her parents. Runner-up was seven-
year-old Lacksana Karthikeyan, who
took nearly seven tonnes of recovered
paper to a local recycling plant.
Many other youngsters were involved
in the recycling project: Namaa Ismall
Al Zarooni collected nearly 800 kg of
plastic scrap, Mia Grayeb collected
320 kg of waste glass and Justina
Jibin brought in nearly 500 unwanted
mobile phones.
In the academic institutions category,
the American School of Dubai in Al
Barsha won the paper campaign for
collecting nearly 20 tonnes of waste.

According to the EEG, the national
waste management campaign helped
cut carbon emissions by at least 73
393 tonnes.

#2MinuteSuperhero
If you’ve been on Twitter recently, you
may have a noticed a quirky trending
topic. That’s because surfer Martin
Dorey wrote a book called Kids Fight
Plastic – an illustrated manual with
handy recycling facts for youngsters. It
also contains 50 two-minute ‘missions’
children can complete at home, at
school, or while out playing with
friends. They can earn ‘recycling
points’ and compete for the two-min-
ute superhero title.
The book is a follow-up on the online
campaign #2minutebeachclean, which
Dorey launched in 2013. It inspired
many UK children to collect plastic
waste and other rubbish left on the
shoreline.

money in a practical way. The initiative
currently has 10 educational centres
with more than 3 000 children as
members.
The teenager came up with the idea
last year, which earned him the
Children’s Climate Prize 2018. The
concept is ‘amazing’, according to the
jury of the annual competition. ‘He
allows children to take micro loans
and pay with items that are recyclable.
It is a system that gives children both
economic independence and power
to influence the climate. The potential
impact is amazing.’
The teenager says his ambitions are
threefold: he hopes his project will
help fight poverty, reduce urban and
ocean waste and boost Peru’s recy-
cling rates. In order to help achieve
the last two, José organises work-
shops focussing on sustainability. He
concludes: ‘Together, we can change
the world.’

pioneer froM peru
People giving a TedTalk typically have
PhDs, are famous authors or run multi-
million companies. An exception on
the big stage was 14-year-old José
Adolfo from Peru, who launched the
Bartselana ‘eco-bank’ in his hometown
Arequipa.
This unique venture encourages chil-
dren and young adults to bring solid
waste to dedicated collection points
in exchange for money. The reward,
paid by official recyclers, is then
deposited in a bank account. New
Bartselana clients must bring it at
least 5kg of waste to set up an
account. They are then expected
to ‘deposit’ a minimum of 1kg of recy-
clables each month. Clients may
choose to withdraw or save up their
credits.
José says the project teaches young
people about the value of waste,
entrepreneurship and how to handle