Subscribe
a u t h o r Kirstin Linnenkoper 44 Recycling innovators: class of 2019 as the saying goes, lead by example. Sometimes, though, it’s the young people rather than the adults we should be keeping an eye on. We’ve gathered the main ...
Read the entire page 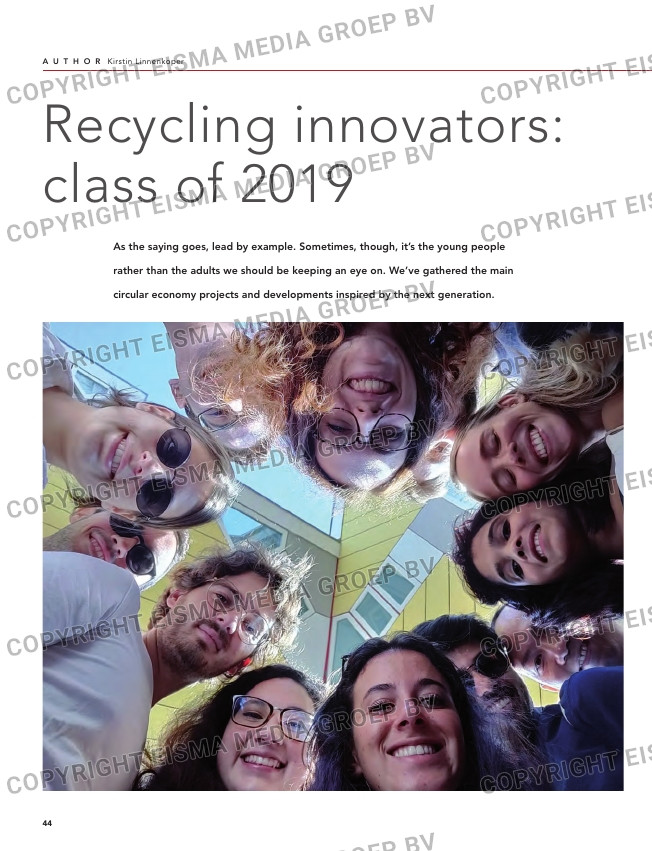 as the saying goes, lead by example. Sometimes, though, it’s the young people

rather than the adults we should be keeping an eye on. We’ve gathered the main

circular economy projects and developments inspired by the next generation.

Seventy masters students from lead-
ing universities across 27 different
European countries participated in the
Raw & Circular Economy Expedition
this August. During the two-week
‘recycling tour’ – known as RACE 2019
– the young people visited various
innovative recyclers and producers.
They also attended lectures highlight-
ing up-and-coming technologies,
materials efficiency, urban mining and
the future of manufacturing. The trip
started in Rome, where this year’s
theme was revealed to be the evolu-
tion of mobility.

Several pit StopS
The RACE 2019 team first visited
Outokumpu in Finland to get an
update on mining, followed by a talk
about car design and manufacturing
at Audi in Ingolstadt (Germany). After
that the students learned about the
‘ecosystems’ of start-ups at CIC in
Rotterdam (Netherlands) and closed
loop recycling systems at Umicore in
Hoboken (Belgium).
The visit to Umicore’s headquarters
was a literal pit stop. As a recycling
partner of the Formula E racing event,
Umicore also drove out a special sur-
prise: a battery-driven racing car. The
new Mahindra Racing vehicle will hit
the circuit next June at the 2020
Formula E competition in Jakarta.
The precious metals recycler affirmed
that, for some years now, the automo-