Subscribe
42 Erik van den Heuvel next to a Russian aircraft engine at the company’s metals scrap yard; a souvenir of a time almost 60% of materials received by Jacomij came from Eastern Europe. Drone view on the company’s electronics recyclin...
Read the entire page 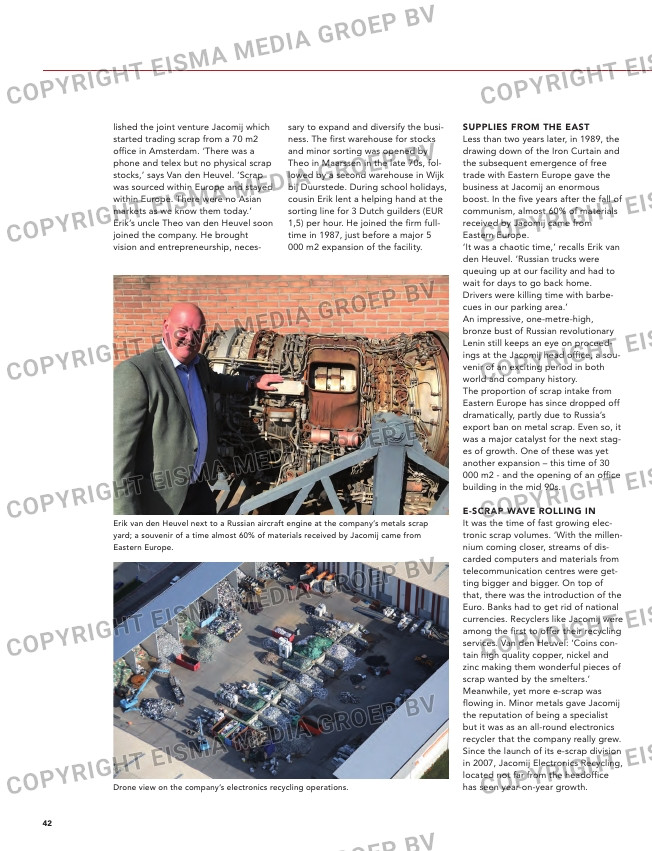 Erik van den Heuvel next to a Russian aircraft engine at the company’s metals scrap
yard; a souvenir of a time almost 60% of materials received by Jacomij came from
Eastern Europe.

lished the joint venture Jacomij which
started trading scrap from a 70 m2
office in Amsterdam. ‘There was a
phone and telex but no physical scrap
stocks,’ says Van den Heuvel. ‘Scrap
was sourced within Europe and stayed
within Europe. There were no Asian
markets as we know them today.’
Erik’s uncle Theo van den Heuvel soon
joined the company. He brought
vision and entrepreneurship, neces-

sary to expand and diversify the busi-
ness. The first warehouse for stocks
and minor sorting was opened by
Theo in Maarssen in the late 70s, fol-
lowed by a second warehouse in Wijk
bij Duurstede. During school holidays,
cousin Erik lent a helping hand at the
sorting line for 3 Dutch guilders (EUR
1,5) per hour. He joined the firm full-
time in 1987, just before a major 5
000 m2 expansion of the facility.

SUPPLIES FROM THE EAST
Less than two years later, in 1989, the
drawing down of the Iron Curtain and
the subsequent emergence of free
trade with Eastern Europe gave the
business at Jacomij an enormous
boost. In the five years after the fall of
communism, almost 60% of materials
received by Jacomij came from
Eastern Europe.
‘It was a chaotic time,’ recalls Erik van
den Heuvel. ‘Russian trucks were
queuing up at our facility and had to
wait for days to go back home.
Drivers were killing time with barbe-
cues in our parking area.’
An impressive, one-metre-high,
bronze bust of Russian revolutionary
Lenin still keeps an eye on proceed-
ings at the Jacomij head office, a sou-
venir of an exciting period in both
world and company history.
The proportion of scrap intake from
Eastern Europe has since dropped off
dramatically, partly due to Russia’s
export ban on metal scrap. Even so, it
was a major catalyst for the next stag-
es of growth. One of these was yet
another expansion – this time of 30
000 m2 – and the opening of an office
building in the mid 90s.

E-SCRAP WAVE ROLLING IN
It was the time of fast growing elec-
tronic scrap volumes. ‘With the millen-
nium coming closer, streams of dis-
carded computers and materials from
telecommunication centres were get-
ting bigger and bigger. On top of
that, there was the introduction of the
Euro. Banks had to get rid of national
currencies. Recyclers like Jacomij were
among the first to offer their recycling
services. Van den Heuvel: ‘Coins con-
tain high quality copper, nickel and
zinc making them wonderful pieces of
scrap wanted by the smelters.’
Meanwhile, yet more e-scrap was
flowing in. Minor metals gave Jacomij
the reputation of being a specialist
but it was as an all-round electronics
recycler that the company really grew.
Since the launch of its e-scrap division
in 2007, Jacomij Electronics Recycling,
located not far from the headoffice
has seen year-on-year growth.

It began relatively small but business
boomed from the very start and quick-
ly led to the first, major capacity
expansion in 2009 – again 25 000 m2.
This was followed by another – 10 000
m2 – in 2014 with the opening of a
new warehouse consisting of seven
bunkers, each with the capacity to
store 2 000 tonnes of electronic scrap.

NEW ERA, NEW CHALLENGES
After Theo retired in 2015, Erik took
over as managing director. He has
been at the helm for 4 years now, aim-
ing high when it comes to innovation
and seeking new frontiers. But the
opening of an office in Brazil did not
have the success Jacomij had hoped
for. ‘Initially business was promising,’
he says. ‘But then China started to ban
the import of certain non-ferrous scrap
materials and we could no longer ship
materials from Brazil to China. Business
dried up, so in 2018 we decided to
stop all activities in Brazil.’
Because of China, Jacomij has seen a
major shift in its markets. ‘In 2016,
China was our number one. Today it is
Japan, followed by Korea, Taiwan and
India,’ he says. ‘The upcoming
Olympics in Tokyo have been a boost