Subscribe
BATTERIES 39recyclinginternational.com | September/October | 2019 world will need 80% more cobalt and lithium by 2030 and 20% more nickel. Because of this, some are looking into developing high nickel/low cobalt bat- tery chemistri...
Read the entire page 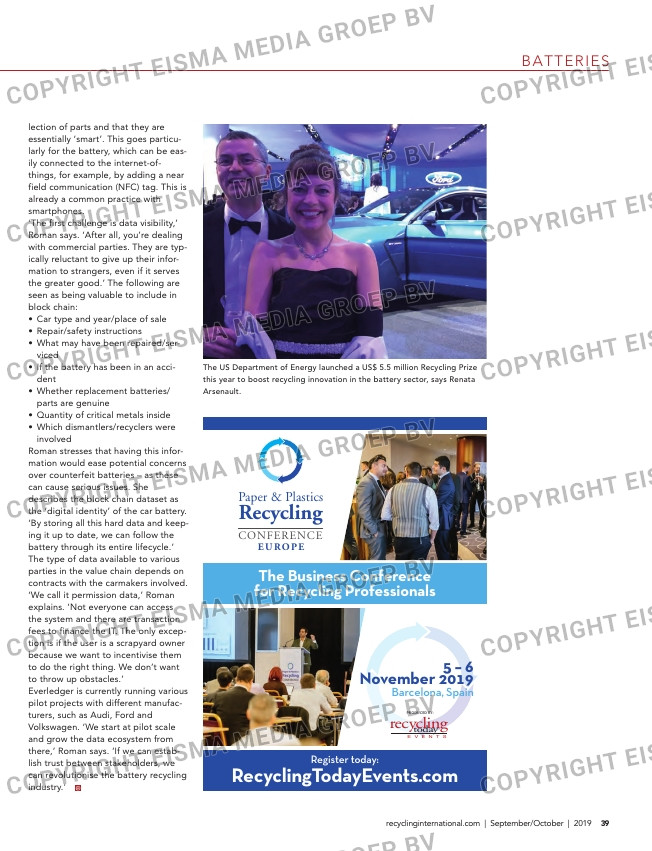 world will need 80% more cobalt and
lithium by 2030 and 20% more nickel.
Because of this, some are looking into
developing high nickel/low cobalt bat-
tery chemistries. The fact remains that
cobalt is needed to make the battery
chemistry stable. ‘The key is to find
the right balance.’
Lundström says another factor is how
quickly second-life options for car bat-
teries will be developed. Depending
on that pace, the copper available for
recycling in 2030 will cover between
9% and 15% of total demand. For lith-
ium, this is expected to satisfy
between 7% and 16% of demand.
In a bid to find the right balance
between supply and demand, Aalto
University is constructing a ‘gigafacto-
ry’ in Finland to produce more durable
and recycling-friendly batteries.

sort and traCe
‘The US Department of Energy
launched a US$ 5.5 million Recycling
Prize this year to boost recycling inno-
vation in the battery sector,’ reports
Renata Arsenault of Ford Motor
Company. Advanced processing tech-
nologies are generally lacking in
developed markets. She observes
that, whether talking about practices
in North America or elsewhere, ‘auto-
mated battery sorting has kind-of
eluded us’. Arsenault is eager to find
out how machine learning and artifi-
cial intelligence will impact the recy-
cling industry.
‘As of now, there are no mandatory
regulations in America regarding
either battery collection or recycling,’
she tells the Lyon assembly. Ford has
initiated its own pilot programme to
get the batteries back, working with
US recyclers, technical universities and
Belgian precious metals recycler
Umicore. Ford is also using ‘powerful
block chain tools’ developed in part-
nership with manufacturers LG Chem,
IBM and Huayou Cobalt to trace
cobalt that is ethically sourced and
produced.
‘Data is everything,’ agrees block
chain specialist Lauren Roman of tech
company Everledger. She argues that
modern cars are more than just a col-

lection of parts and that they are
essentially ‘smart’. This goes particu-
larly for the battery, which can be eas-
ily connected to the internet-of-
things, for example, by adding a near
field communication (NFC) tag. This is
already a common practice with
smartphones.
‘The first challenge is data visibility,’
Roman says. ‘After all, you’re dealing
with commercial parties. They are typ-
ically reluctant to give up their infor-
mation to strangers, even if it serves
the greater good.’ The following are
seen as being valuable to include in
block chain:
• Car type and year/place of sale
• Repair/safety instructions
• What may have been repaired/ser-

viced
• If the battery has been in an acci-

involved
Roman stresses that having this infor-
mation would ease potential concerns
over counterfeit batteries – as these
can cause serious issues. She
describes the block chain dataset as
the ‘digital identity’ of the car battery.
‘By storing all this hard data and keep-
ing it up to date, we can follow the
battery through its entire lifecycle.’
The type of data available to various
parties in the value chain depends on
contracts with the carmakers involved.
‘We call it permission data,’ Roman
explains. ‘Not everyone can access
the system and there are transaction
fees to finance the IT. The only excep-
tion is if the user is a scrapyard owner
because we want to incentivise them
to do the right thing. We don’t want
to throw up obstacles.’
Everledger is currently running various
pilot projects with different manufac-
turers, such as Audi, Ford and
Volkswagen. ‘We start at pilot scale
and grow the data ecosystem from
there,’ Roman says. ‘If we can estab-
lish trust between stakeholders, we
can revolutionise the battery recycling
industry.’

The Business Conference
for Recycling Professionals

The US Department of Energy launched a US$ 5.5 million Recycling Prize
this year to boost recycling innovation in the battery sector, says Renata
Arsenault.