Subscribe
RESEARCH 31recyclinginternational.com | September/October | 2019 and Europe (eg the Lithorec project). Collection rates will need to be improved to take this to the next level, says Hans Eric Melin, the author of the report. He ci...
Read the entire page 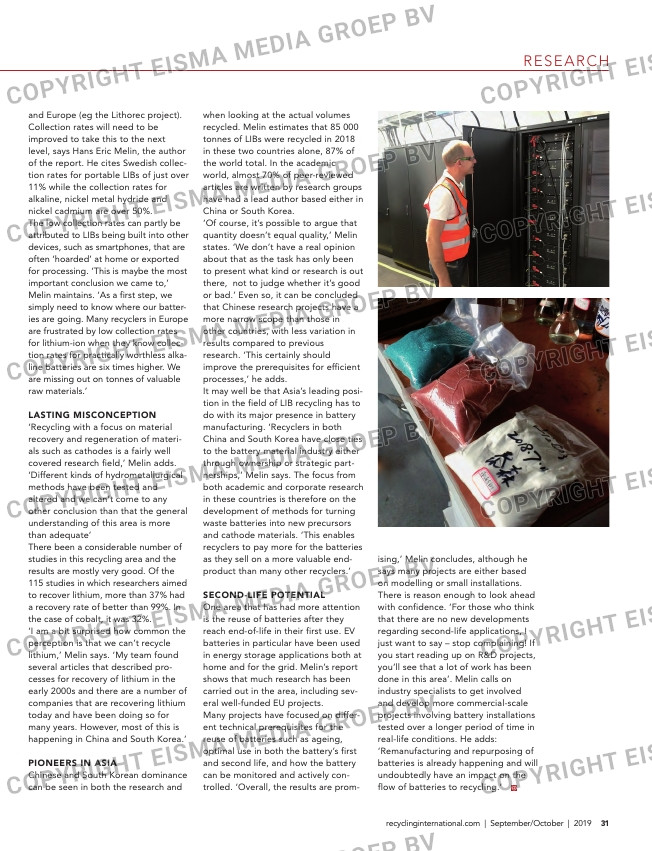 and Europe (eg the Lithorec project).
Collection rates will need to be
improved to take this to the next
level, says Hans Eric Melin, the author
of the report. He cites Swedish collec-
tion rates for portable LIBs of just over
11% while the collection rates for
alkaline, nickel metal hydride and
nickel cadmium are over 50%.
The low collection rates can partly be
attributed to LIBs being built into other
devices, such as smartphones, that are
often ‘hoarded’ at home or exported
for processing. ‘This is maybe the most
important conclusion we came to,’
Melin maintains. ‘As a first step, we
simply need to know where our batter-
ies are going. Many recyclers in Europe
are frustrated by low collection rates
for lithium-ion when they know collec-
tion rates for practically worthless alka-
line batteries are six times higher. We
are missing out on tonnes of valuable
raw materials.’

lasTing misconcepTion
‘Recycling with a focus on material
recovery and regeneration of materi-
als such as cathodes is a fairly well
covered research field,’ Melin adds.
‘Different kinds of hydrometallurgical
methods have been tested and
altered and we can’t come to any
other conclusion than that the general
understanding of this area is more
than adequate’
There been a considerable number of
studies in this recycling area and the
results are mostly very good. Of the
115 studies in which researchers aimed
to recover lithium, more than 37% had
a recovery rate of better than 99%. In
the case of cobalt, it was 32%.
‘I am a bit surprised how common the
perception is that we can’t recycle
lithium,’ Melin says. ‘My team found
several articles that described pro-
cesses for recovery of lithium in the
early 2000s and there are a number of
companies that are recovering lithium
today and have been doing so for
many years. However, most of this is
happening in China and South Korea.’

when looking at the actual volumes
recycled. Melin estimates that 85 000
tonnes of LIBs were recycled in 2018
in these two countries alone, 87% of
the world total. In the academic
world, almost 70% of peer-reviewed
articles are written by research groups
have had a lead author based either in
China or South Korea.
‘Of course, it’s possible to argue that
quantity doesn’t equal quality,’ Melin
states. ‘We don’t have a real opinion
about that as the task has only been
to present what kind or research is out
there, not to judge whether it’s good
or bad.’ Even so, it can be concluded
that Chinese research projects have a
more narrow scope than those in
other countries, with less variation in
results compared to previous
research. ‘This certainly should
improve the prerequisites for efficient
processes,’ he adds.
It may well be that Asia’s leading posi-
tion in the field of LIB recycling has to
do with its major presence in battery
manufacturing. ‘Recyclers in both
China and South Korea have close ties
to the battery material industry either
through ownership or strategic part-
nerships,’ Melin says. The focus from
both academic and corporate research
in these countries is therefore on the
development of methods for turning
waste batteries into new precursors
and cathode materials. ‘This enables
recyclers to pay more for the batteries
as they sell on a more valuable end-
product than many other recyclers.’

second-liFe poTenTial
One area that has had more attention
is the reuse of batteries after they
reach end-of-life in their first use. EV
batteries in particular have been used
in energy storage applications both at
home and for the grid. Melin’s report
shows that much research has been
carried out in the area, including sev-
eral well-funded EU projects.
Many projects have focused on differ-
ent technical prerequisites for the
reuse of batteries such as ageing,
optimal use in both the battery’s first
and second life, and how the battery
can be monitored and actively con-
trolled. ‘Overall, the results are prom-

ising,’ Melin concludes, although he
says many projects are either based
on modelling or small installations.
There is reason enough to look ahead
with confidence. ‘For those who think
that there are no new developments
regarding second-life applications, I
just want to say – stop complaining! If
you start reading up on R&D projects,
you’ll see that a lot of work has been
done in this area’. Melin calls on
industry specialists to get involved
and develop more commercial-scale
projects involving battery installations
tested over a longer period of time in
real-life conditions. He adds:
‘Remanufacturing and repurposing of
batteries is already happening and will
undoubtedly have an impact on the
flow of batteries to recycling.’