Subscribe
30 LIVE AT THE OUTSIDE AREA SHREDDING, WASHING, SORTING: Alle Infos: lindner.com/k2019 Three years have passed since the last K and everything has changed. We accept this challenge and show at this year's K show highly productive, tur...
Read the entire page 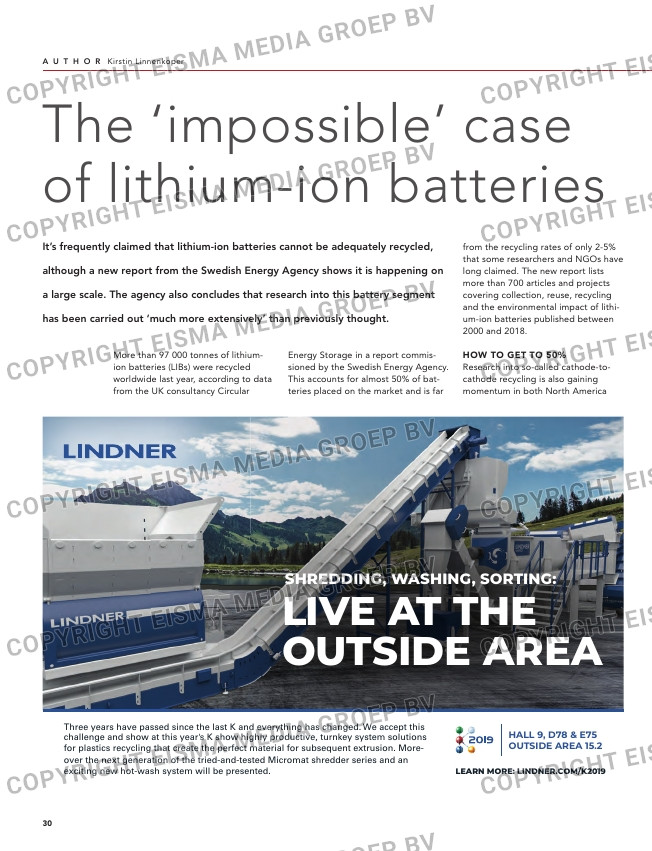 LIVE AT THE
OUTSIDE AREA

Three years have passed since the last K and everything has changed. We accept this
challenge and show at this year’s K show highly productive, turnkey system solutions
for plastics recycling that create the perfect material for subsequent extrusion. More-
over the next generation of the tried-and-tested Micromat shredder series and an
exciting new hot-wash system will be presented.

a large scale. the agency also concludes that research into this battery segment

has been carried out ‘much more extensively’ than previously thought.

More than 97 000 tonnes of lithium-
ion batteries (LIBs) were recycled
worldwide last year, according to data
from the UK consultancy Circular

Energy Storage in a report commis-
sioned by the Swedish Energy Agency.
This accounts for almost 50% of bat-
teries placed on the market and is far

from the recycling rates of only 2-5%
that some researchers and NGOs have
long claimed. The new report lists
more than 700 articles and projects
covering collection, reuse, recycling
and the environmental impact of lithi-
um-ion batteries published between
2000 and 2018.

and Europe (eg the Lithorec project).
Collection rates will need to be
improved to take this to the next
level, says Hans Eric Melin, the author
of the report. He cites Swedish collec-
tion rates for portable LIBs of just over
11% while the collection rates for
alkaline, nickel metal hydride and
nickel cadmium are over 50%.
The low collection rates can partly be
attributed to LIBs being built into other
devices, such as smartphones, that are
often ‘hoarded’ at home or exported
for processing. ‘This is maybe the most
important conclusion we came to,’
Melin maintains. ‘As a first step, we
simply need to know where our batter-
ies are going. Many recyclers in Europe
are frustrated by low collection rates
for lithium-ion when they know collec-
tion rates for practically worthless alka-
line batteries are six times higher. We
are missing out on tonnes of valuable
raw materials.’

lasTing misconcepTion
‘Recycling with a focus on material
recovery and regeneration of materi-
als such as cathodes is a fairly well
covered research field,’ Melin adds.
‘Different kinds of hydrometallurgical
methods have been tested and
altered and we can’t come to any
other conclusion than that the general
understanding of this area is more
than adequate’
There been a considerable number of
studies in this recycling area and the
results are mostly very good. Of the
115 studies in which researchers aimed
to recover lithium, more than 37% had
a recovery rate of better than 99%. In
the case of cobalt, it was 32%.
‘I am a bit surprised how common the
perception is that we can’t recycle
lithium,’ Melin says. ‘My team found
several articles that described pro-
cesses for recovery of lithium in the
early 2000s and there are a number of
companies that are recovering lithium
today and have been doing so for
many years. However, most of this is
happening in China and South Korea.’