Subscribe
a u t h o r Martijn Reintjes 24 ‘Stop the hassle with scrap movements’ E u R I C m e e t s i n P a r i s ‘It is not acceptable that recycled materials change legal status two or three times when they cross borders of two E...
Read the entire page 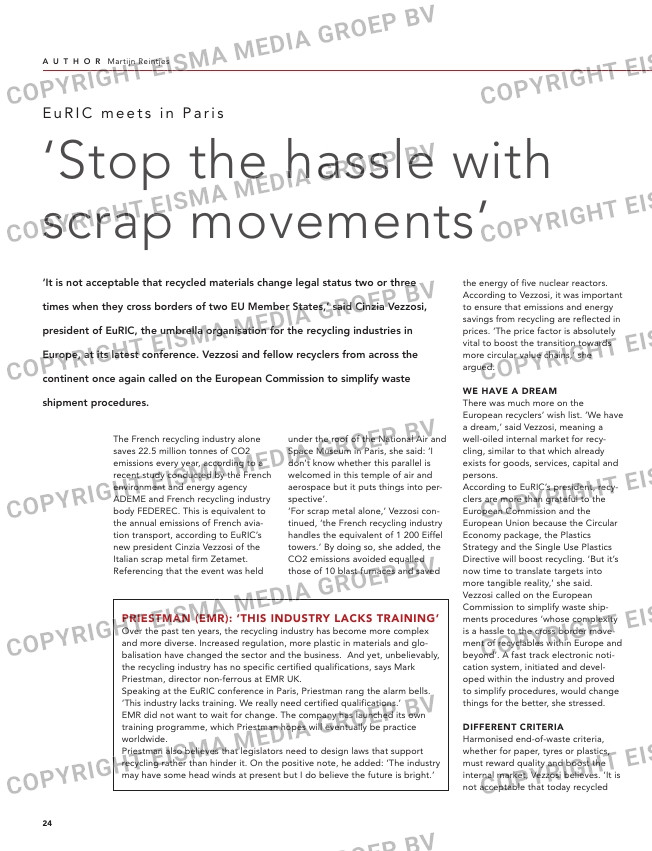 ‘Stop the hassle with
scrap movements’

president of EurIC, the umbrella organisation for the recycling industries in

Europe, at its latest conference. Vezzosi and fellow recyclers from across the

continent once again called on the European Commission to simplify waste

materials still change legal status two
or three times when they cross bor-
ders of two EU Member States,’ she
said, adding it was time to get right
the interface between waste and
chemicals legislation. ‘Recyclers’
inputs are waste while our outputs are
recycled materials ready to be used
by steel mills, smelters, paper mills or
plastic converters for the manufactur-
ing of new products.’

INDUSTRY INPUT NEEDED
Daniel Calleja-Crespo, director-gener-
al Environment for the European
Commission, told the EuRIC audience
that it was in everyone’s interest to
continue rolling out the Circular
Economy. ‘We will simply have to
make it a success, there is no Plan B,’
he said.
According to Calleja-Crespo, it is cru-
cial that all parties involved work
together. ‘That’s lawmakers and politi-
cians in Brussels as well as the recy-
cling industry. We can only go fast if
we help each other. So please give us
your input.’
The Circular Economy is ‘the new nor-
mal to build a better world for our-
selves and future generations,’ agreed
Caroline Craenhals, ceo of Belgian
Scrap Terminal (BTS). However, ‘grow-
ing and ever-complex’ legislation
increasingly hindered the day-to-day
work of recycling companies like BTS,
she complained.
Craenhals also noted that the public
might sometimes have a poor impres-
sion of recyclers. ‘We are not the trou-
blemakers, we do not add or create
dangerous substances. It’s the battery
that causes fires at scrap yards.’

The French recycling industry alone
saves 22.5 million tonnes of CO2
emissions every year, according to a
recent study conducted by the French
environment and energy agency
ADEME and French recycling industry
body FEDEREC. This is equivalent to
the annual emissions of French avia-
tion transport, according to EuRIC’s
new president Cinzia Vezzosi of the
Italian scrap metal firm Zetamet.
Referencing that the event was held

under the roof of the National Air and
Space Museum in Paris, she said: ‘I
don’t know whether this parallel is
welcomed in this temple of air and
aerospace but it puts things into per-
spective’.
‘For scrap metal alone,’ Vezzosi con-
tinued, ‘the French recycling industry
handles the equivalent of 1 200 Eiffel
towers.’ By doing so, she added, the
CO2 emissions avoided equalled
those of 10 blast furnaces and saved

the energy of five nuclear reactors.
According to Vezzosi, it was important
to ensure that emissions and energy
savings from recycling are reflected in
prices. ‘The price factor is absolutely
vital to boost the transition towards
more circular value chains,’ she
argued.

WE HAVE A DREAM
There was much more on the
European recyclers’ wish list. ‘We have
a dream,’ said Vezzosi, meaning a
well-oiled internal market for recy-
cling, similar to that which already
exists for goods, services, capital and
persons.
According to EuRIC’s president, recy-
clers are more than grateful to the
European Commission and the
European Union because the Circular
Economy package, the Plastics
Strategy and the Single Use Plastics
Directive will boost recycling. ‘But it’s
now time to translate targets into
more tangible reality,’ she said.
Vezzosi called on the European
Commission to simplify waste ship-
ments procedures ‘whose complexity
is a hassle to the cross border move-
ment of recyclables within Europe and
beyond’. A fast track electronic noti-
cation system, initiated and devel-
oped within the industry and proved
to simplify procedures, would change
things for the better, she stressed.

DIFFERENT CRITERIA
Harmonised end-of-waste criteria,
whether for paper, tyres or plastics,
must reward quality and boost the
internal market, Vezzosi believes. ‘It is
not acceptable that today recycled

PRIESTMAN (EMR): ‘THIS INDUSTRY LACKS TRAINING’
Over the past ten years, the recycling industry has become more complex
and more diverse. Increased regulation, more plastic in materials and glo-
balisation have changed the sector and the business. And yet, unbelievably,
the recycling industry has no specific certified qualifications, says Mark
Priestman, director non-ferrous at EMR UK.
Speaking at the EuRIC conference in Paris, Priestman rang the alarm bells.
‘This industry lacks training. We really need certified qualifications.’
EMR did not want to wait for change. The company has launched its own
training programme, which Priestman hopes will eventually be practice
worldwide.
Priestman also believes that legislators need to design laws that support
recycling rather than hinder it. On the positive note, he added: ‘The industry
may have some head winds at present but I do believe the future is bright.’