Subscribe
20 TRADE SHOW Gucinex facility. Shears, cylinders, pipes, nuts and bolts - all were replaced or restored. When the engi- neering work was completed, the machine was repainted in the original Taurus orange-blue style. ‘It’s not onl...
Read the entire page 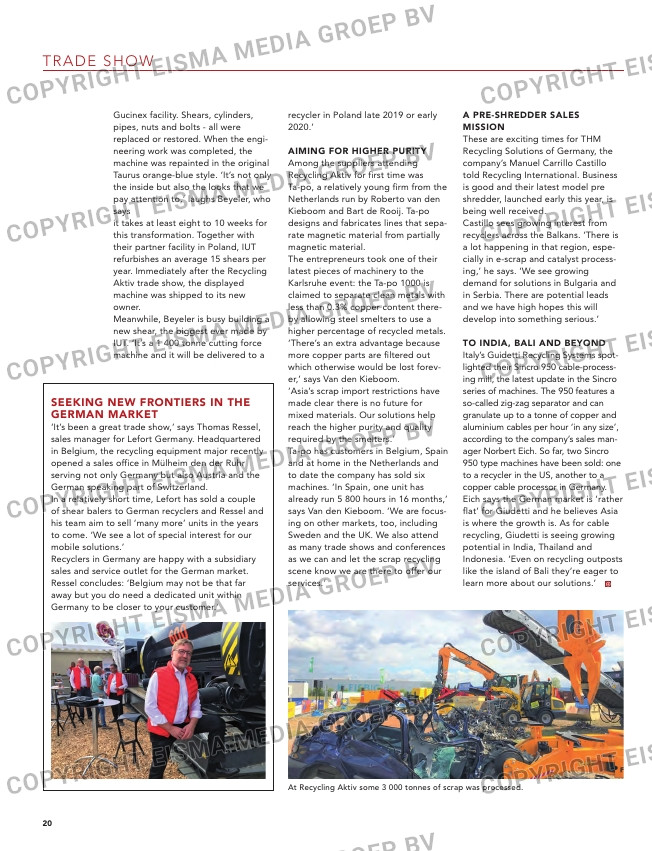 Gucinex facility. Shears, cylinders,
pipes, nuts and bolts – all were
replaced or restored. When the engi-
neering work was completed, the
machine was repainted in the original
Taurus orange-blue style. ‘It’s not only
the inside but also the looks that we
pay attention to,’ laughs Beyeler, who
says
it takes at least eight to 10 weeks for
this transformation. Together with
their partner facility in Poland, IUT
refurbishes an average 15 shears per
year. Immediately after the Recycling
Aktiv trade show, the displayed
machine was shipped to its new
owner.
Meanwhile, Beyeler is busy building a
new shear, the biggest ever made by
IUT. ‘It’s a 1 400 tonne cutting force
machine and it will be delivered to a

AIMING FOR HIGHER PURITY
Among the suppliers attending
Recycling Aktiv for first time was
Ta-po, a relatively young firm from the
Netherlands run by Roberto van den
Kieboom and Bart de Rooij. Ta-po
designs and fabricates lines that sepa-
rate magnetic material from partially
magnetic material.
The entrepreneurs took one of their
latest pieces of machinery to the
Karlsruhe event: the Ta-po 1000 is
claimed to separate clean metals with
less than 0.3% copper content there-
by allowing steel smelters to use a
higher percentage of recycled metals.
‘There’s an extra advantage because
more copper parts are filtered out
which otherwise would be lost forev-
er,’ says Van den Kieboom.
‘Asia’s scrap import restrictions have
made clear there is no future for
mixed materials. Our solutions help
reach the higher purity and quality
required by the smelters.’
Ta-po has customers in Belgium, Spain
and at home in the Netherlands and
to date the company has sold six
machines. ‘In Spain, one unit has
already run 5 800 hours in 16 months,’
says Van den Kieboom. ‘We are focus-
ing on other markets, too, including
Sweden and the UK. We also attend
as many trade shows and conferences
as we can and let the scrap recycling
scene know we are there to offer our
services.’

A PRE-SHREDDER SALES
MISSION
These are exciting times for THM
Recycling Solutions of Germany, the
company’s Manuel Carrillo Castillo
told Recycling International. Business
is good and their latest model pre
shredder, launched early this year, is
being well received.
Castillo sees growing interest from
recyclers across the Balkans. ‘There is
a lot happening in that region, espe-
cially in e-scrap and catalyst process-
ing,’ he says. ‘We see growing
demand for solutions in Bulgaria and
in Serbia. There are potential leads
and we have high hopes this will
develop into something serious.’

TO INDIA, BALI AND BEYOND
Italy’s Guidetti Recycling Systems spot-
lighted their Sincro 950 cable-process-
ing mill, the latest update in the Sincro
series of machines. The 950 features a
so-called zig-zag separator and can
granulate up to a tonne of copper and
aluminium cables per hour ‘in any size’,
according to the company’s sales man-
ager Norbert Eich. So far, two Sincro
950 type machines have been sold: one
to a recycler in the US, another to a
copper cable processor in Germany.
Eich says the German market is ‘rather
flat’ for Giudetti and he believes Asia
is where the growth is. As for cable
recycling, Giudetti is seeing growing
potential in India, Thailand and
Indonesia. ‘Even on recycling outposts
like the island of Bali they’re eager to
learn more about our solutions.’

At Recycling Aktiv some 3 000 tonnes of scrap was processed.

SEEKING NEW FRONTIERS IN THE
GERMAN MARKET
‘It’s been a great trade show,’ says Thomas Ressel,
sales manager for Lefort Germany. Headquartered
in Belgium, the recycling equipment major recently
opened a sales office in Mülheim den der Ruhr
serving not only Germany but also Austria and the
German speaking part of Switzerland.
In a relatively short time, Lefort has sold a couple
of shear balers to German recyclers and Ressel and
his team aim to sell ‘many more’ units in the years
to come. ‘We see a lot of special interest for our
mobile solutions.’
Recyclers in Germany are happy with a subsidiary
sales and service outlet for the German market.
Ressel concludes: ‘Belgium may not be that far
away but you do need a dedicated unit within
Germany to be closer to your customer.’