Subscribe
16 COUNTRY REPORT construction and renovation causing a huge inflow of scrap. For instance, we see a huge inflow of light metals, such as aluminium window frames, left over from industrial production.’ Why move indoors? Teck Siang:...
Read the entire page 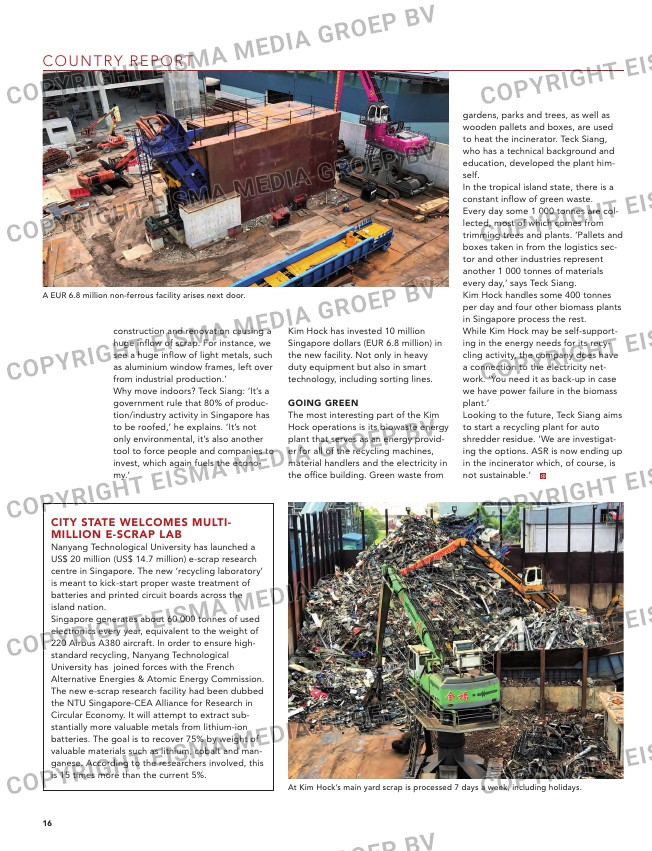 construction and renovation causing a
huge inflow of scrap. For instance, we
see a huge inflow of light metals, such
as aluminium window frames, left over
from industrial production.’
Why move indoors? Teck Siang: ‘It’s a
government rule that 80% of produc-
tion/industry activity in Singapore has
to be roofed,’ he explains. ‘It’s not
only environmental, it’s also another
tool to force people and companies to
invest, which again fuels the econo-
my.’

Kim Hock has invested 10 million
Singapore dollars (EUR 6.8 million) in
the new facility. Not only in heavy
duty equipment but also in smart
technology, including sorting lines.

GOING GREEN
The most interesting part of the Kim
Hock operations is its biowaste energy
plant that serves as an energy provid-
er for all of the recycling machines,
material handlers and the electricity in
the office building. Green waste from

gardens, parks and trees, as well as
wooden pallets and boxes, are used
to heat the incinerator. Teck Siang,
who has a technical background and
education, developed the plant him-
self.
In the tropical island state, there is a
constant inflow of green waste.
Every day some 1 000 tonnes are col-
lected, most of which comes from
trimming trees and plants. ‘Pallets and
boxes taken in from the logistics sec-
tor and other industries represent
another 1 000 tonnes of materials
every day,’ says Teck Siang.
Kim Hock handles some 400 tonnes
per day and four other biomass plants
in Singapore process the rest.
While Kim Hock may be self-support-
ing in the energy needs for its recy-
cling activity, the company does have
a connection to the electricity net-
work. ‘You need it as back-up in case
we have power failure in the biomass
plant.’
Looking to the future, Teck Siang aims
to start a recycling plant for auto
shredder residue. ‘We are investigat-
ing the options. ASR is now ending up
in the incinerator which, of course, is
not sustainable.’

At Kim Hock’s main yard scrap is processed 7 days a week, including holidays.

CITY STATE wELCOMES MULTI-
MILLION E-SCRAp LAb
Nanyang Technological University has launched a
US$ 20 million (US$ 14.7 million) e-scrap research
centre in Singapore. The new ‘recycling laboratory’
is meant to kick-start proper waste treatment of
batteries and printed circuit boards across the
island nation.
Singapore generates about 60 000 tonnes of used
electronics every year, equivalent to the weight of
220 Airbus A380 aircraft. In order to ensure high-
standard recycling, Nanyang Technological
University has joined forces with the French
Alternative Energies & Atomic Energy Commission.
The new e-scrap research facility had been dubbed
the NTU Singapore-CEA Alliance for Research in
Circular Economy. It will attempt to extract sub-
stantially more valuable metals from lithium-ion
batteries. The goal is to recover 75% by weight of
valuable materials such as lithium, cobalt and man-
ganese. According to the researchers involved, this
is 15 times more than the current 5%.