Subscribe
COUNTRY REPORT 15recyclinginternational.com | September/October | 2019 head office, main scrap yard and bio- mass energy plant are at the port. ‘Although the sea is nearby, it is not a waterfront yard with direct sea access, as y...
Read the entire page 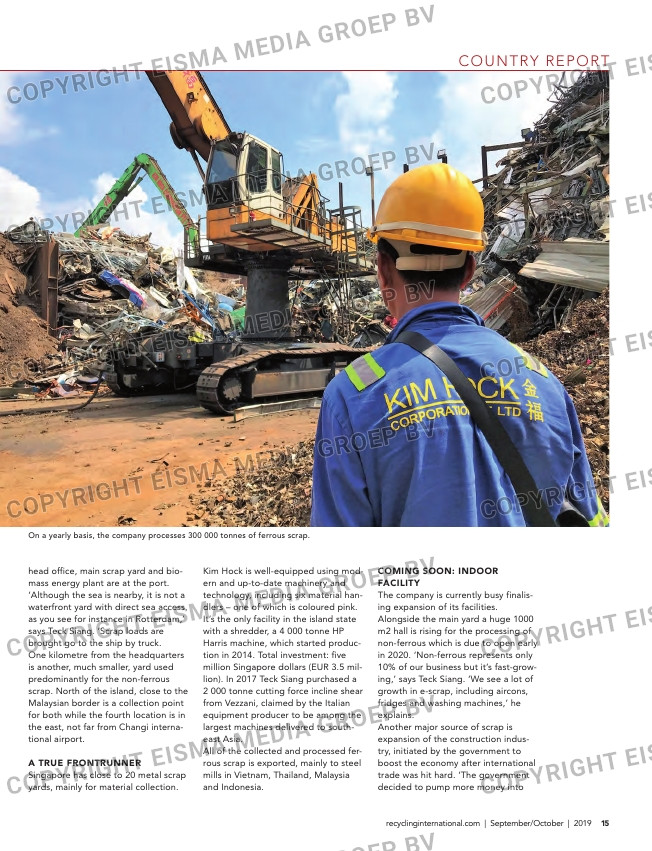 head office, main scrap yard and bio-
mass energy plant are at the port.
‘Although the sea is nearby, it is not a
waterfront yard with direct sea access,
as you see for instance in Rotterdam,’
says Teck Siang. ‘Scrap loads are
brought go to the ship by truck.
One kilometre from the headquarters
is another, much smaller, yard used
predominantly for the non-ferrous
scrap. North of the island, close to the
Malaysian border is a collection point
for both while the fourth location is in
the east, not far from Changi interna-
tional airport.

Kim Hock is well-equipped using mod-
ern and up-to-date machinery and
technology, including six material han-
dlers – one of which is coloured pink.
It’s the only facility in the island state
with a shredder, a 4 000 tonne HP
Harris machine, which started produc-
tion in 2014. Total investment: five
million Singapore dollars (EUR 3.5 mil-
lion). In 2017 Teck Siang purchased a
2 000 tonne cutting force incline shear
from Vezzani, claimed by the Italian
equipment producer to be among the
largest machines delivered to south-
east Asia.
All of the collected and processed fer-
rous scrap is exported, mainly to steel
mills in Vietnam, Thailand, Malaysia
and Indonesia.

COMING SOON: INDOOR
FACILITY
The company is currently busy finalis-
ing expansion of its facilities.
Alongside the main yard a huge 1000
m2 hall is rising for the processing of
non-ferrous which is due to open early
in 2020. ‘Non-ferrous represents only
10% of our business but it’s fast-grow-
ing,’ says Teck Siang. ‘We see a lot of
growth in e-scrap, including aircons,
fridges and washing machines,’ he
explains.
Another major source of scrap is
expansion of the construction indus-
try, initiated by the government to
boost the economy after international
trade was hit hard. ‘The government
decided to pump more money into

On a yearly basis, the company processes 300 000 tonnes of ferrous scrap.