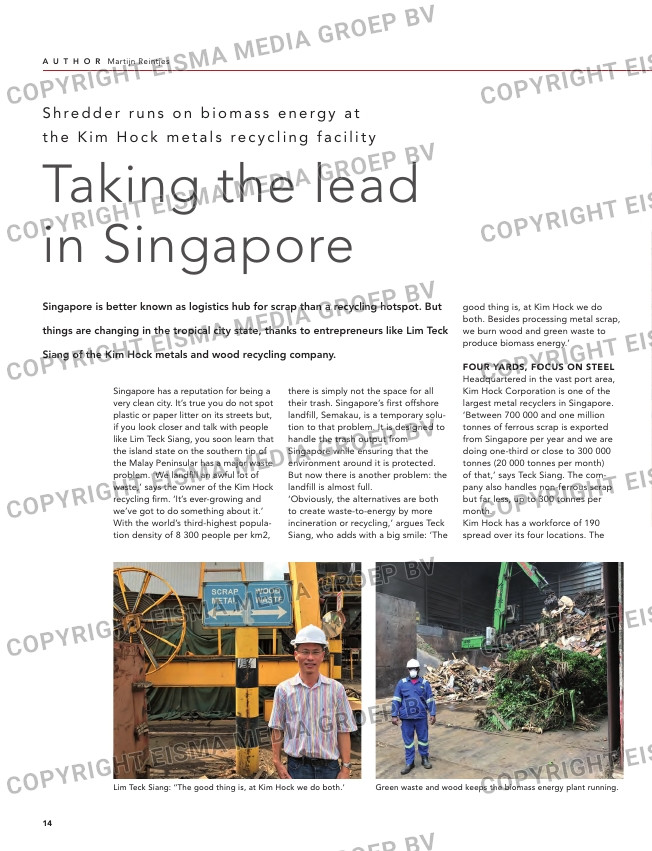 Taking the lead
in Singapore

Singapore is better known as logistics hub for scrap than a recycling hotspot. But

things are changing in the tropical city state, thanks to entrepreneurs like Lim teck

Siang of the Kim hock metals and wood recycling company.

head office, main scrap yard and bio-
mass energy plant are at the port.
‘Although the sea is nearby, it is not a
waterfront yard with direct sea access,
as you see for instance in Rotterdam,’
says Teck Siang. ‘Scrap loads are
brought go to the ship by truck.
One kilometre from the headquarters
is another, much smaller, yard used
predominantly for the non-ferrous
scrap. North of the island, close to the
Malaysian border is a collection point
for both while the fourth location is in
the east, not far from Changi interna-
tional airport.

Singapore has a reputation for being a
very clean city. It’s true you do not spot
plastic or paper litter on its streets but,
if you look closer and talk with people
like Lim Teck Siang, you soon learn that
the island state on the southern tip of
the Malay Peninsular has a major waste
problem. ‘We landfill an awful lot of
waste,’ says the owner of the Kim Hock
recycling firm. ‘It’s ever-growing and
we’ve got to do something about it.’
With the world’s third-highest popula-
tion density of 8 300 people per km2,

there is simply not the space for all
their trash. Singapore’s first offshore
landfill, Semakau, is a temporary solu-
tion to that problem. It is designed to
handle the trash output from
Singapore while ensuring that the
environment around it is protected.
But now there is another problem: the
landfill is almost full.
‘Obviously, the alternatives are both
to create waste-to-energy by more
incineration or recycling,’ argues Teck
Siang, who adds with a big smile: ‘The

good thing is, at Kim Hock we do
both. Besides processing metal scrap,
we burn wood and green waste to
produce biomass energy.’

FOUR YARDS, FOCUS ON STEEL
Headquartered in the vast port area,
Kim Hock Corporation is one of the
largest metal recyclers in Singapore.
‘Between 700 000 and one million
tonnes of ferrous scrap is exported
from Singapore per year and we are
doing one-third or close to 300 000
tonnes (20 000 tonnes per month)
of that,’ says Teck Siang. The com-
pany also handles non-ferrous scrap
but far less, up to 300 tonnes per
month.
Kim Hock has a workforce of 190
spread over its four locations. The

Green waste and wood keeps the biomass energy plant running.Lim Teck Siang: ‘‘The good thing is, at Kim Hock we do both.’

On a yearly basis, the company processes 300 000 tonnes of ferrous scrap.