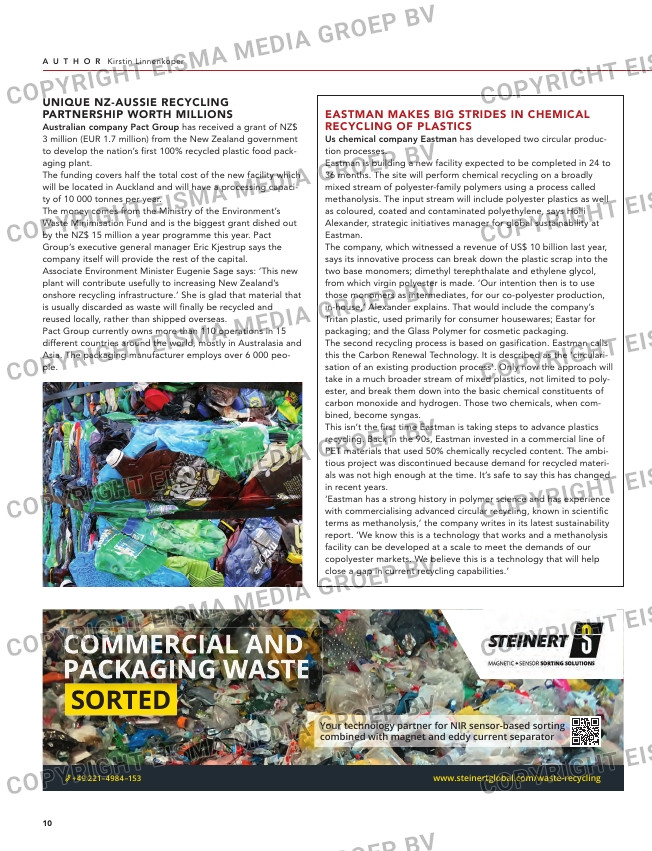 unique nZ-aussie Recycling
paRtneRship woRth millions
Australian company Pact Group has received a grant of NZ$
3 million (EUR 1.7 million) from the New Zealand government
to develop the nation’s first 100% recycled plastic food pack-
aging plant.
The funding covers half the total cost of the new facility which
will be located in Auckland and will have a processing capaci-
ty of 10 000 tonnes per year.
The money comes from the Ministry of the Environment’s
Waste Minimisation Fund and is the biggest grant dished out
by the NZ$ 15 million a year programme this year. Pact
Group’s executive general manager Eric Kjestrup says the
company itself will provide the rest of the capital.
Associate Environment Minister Eugenie Sage says: ‘This new
plant will contribute usefully to increasing New Zealand’s
onshore recycling infrastructure.’ She is glad that material that
is usually discarded as waste will finally be recycled and
reused locally, rather than shipped overseas.
Pact Group currently owns more than 110 operations in 15
different countries around the world, mostly in Australasia and
Asia. The packaging manufacturer employs over 6 000 peo-
ple.

eastman makes big stRides in chemical
Recycling of plastics
Us chemical company Eastman has developed two circular produc-
tion processes.
Eastman is building a new facility expected to be completed in 24 to
36 months. The site will perform chemical recycling on a broadly
mixed stream of polyester-family polymers using a process called
methanolysis. The input stream will include polyester plastics as well
as coloured, coated and contaminated polyethylene, says Holli
Alexander, strategic initiatives manager for global sustainability at
Eastman.
The company, which witnessed a revenue of US$ 10 billion last year,
says its innovative process can break down the plastic scrap into the
two base monomers; dimethyl terephthalate and ethylene glycol,
from which virgin polyester is made. ‘Our intention then is to use
those monomers as intermediates, for our co-polyester production,
in-house,’ Alexander explains. That would include the company’s
Tritan plastic, used primarily for consumer housewares; Eastar for
packaging; and the Glass Polymer for cosmetic packaging.
The second recycling process is based on gasification. Eastman calls
this the Carbon Renewal Technology. It is described as the ‘circulari-
sation of an existing production process’. Only now the approach will
take in a much broader stream of mixed plastics, not limited to poly-
ester, and break them down into the basic chemical constituents of
carbon monoxide and hydrogen. Those two chemicals, when com-
bined, become syngas.
This isn’t the first time Eastman is taking steps to advance plastics
recycling. Back in the 90s, Eastman invested in a commercial line of
PET materials that used 50% chemically recycled content. The ambi-
tious project was discontinued because demand for recycled materi-
als was not high enough at the time. It’s safe to say this has changed
in recent years.
‘Eastman has a strong history in polymer science and has experience
with commercialising advanced circular recycling, known in scientific
terms as methanolysis,’ the company writes in its latest sustainability
report. ‘We know this is a technology that works and a methanolysis
facility can be developed at a scale to meet the demands of our
copolyester markets. We believe this is a technology that will help
close a gap in current recycling capabilities.’