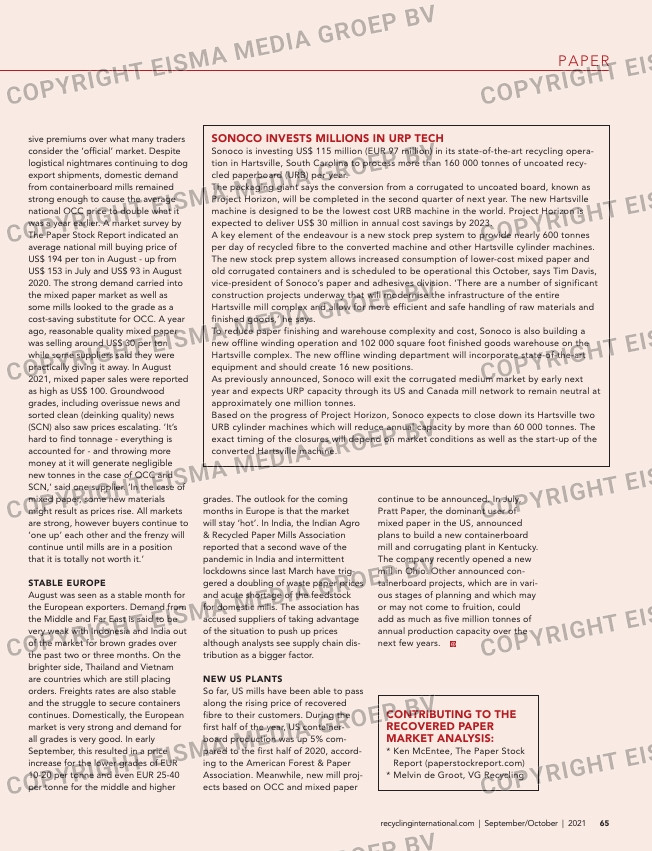 continue to be announced. In July,
Pratt Paper, the dominant user of
mixed paper in the US, announced
plans to build a new containerboard
mill and corrugating plant in Kentucky.
The company recently opened a new
mill in Ohio. Other announced con-
tainerboard projects, which are in vari-
ous stages of planning and which may
or may not come to fruition, could
add as much as five million tonnes of
annual production capacity over the
next few years.

SOnOCO invESTS miLLiOnS in URP TECh
Sonoco is investing US$ 115 million (EUR 97 million) in its state-of-the-art recycling opera-
tion in Hartsville, South Carolina to process more than 160 000 tonnes of uncoated recy-
cled paperboard (URB) per year.
The packaging giant says the conversion from a corrugated to uncoated board, known as
Project Horizon, will be completed in the second quarter of next year. The new Hartsville
machine is designed to be the lowest cost URB machine in the world. Project Horizon is
expected to deliver US$ 30 million in annual cost savings by 2023.
A key element of the endeavour is a new stock prep system to provide nearly 600 tonnes
per day of recycled fibre to the converted machine and other Hartsville cylinder machines.
The new stock prep system allows increased consumption of lower-cost mixed paper and
old corrugated containers and is scheduled to be operational this October, says Tim Davis,
vice-president of Sonoco’s paper and adhesives division. ‘There are a number of significant
construction projects underway that will modernise the infrastructure of the entire
Hartsville mill complex and allow for more efficient and safe handling of raw materials and
finished goods,’ he says.
To reduce paper finishing and warehouse complexity and cost, Sonoco is also building a
new offline winding operation and 102 000 square foot finished goods warehouse on the
Hartsville complex. The new offline winding department will incorporate state-of-the-art
equipment and should create 16 new positions.
As previously announced, Sonoco will exit the corrugated medium market by early next
year and expects URP capacity through its US and Canada mill network to remain neutral at
approximately one million tonnes.
Based on the progress of Project Horizon, Sonoco expects to close down its Hartsville two
URB cylinder machines which will reduce annual capacity by more than 60 000 tonnes. The
exact timing of the closures will depend on market conditions as well as the start-up of the
converted Hartsville machine.

grades. The outlook for the coming
months in Europe is that the market
will stay ‘hot’. In India, the Indian Agro
& Recycled Paper Mills Association
reported that a second wave of the
pandemic in India and intermittent
lockdowns since last March have trig-
gered a doubling of waste paper prices
and acute shortage of the feedstock
for domestic mills. The association has
accused suppliers of taking advantage
of the situation to push up prices
although analysts see supply chain dis-
tribution as a bigger factor.

nEW US PLAnTS
So far, US mills have been able to pass
along the rising price of recovered
fibre to their customers. During the
first half of the year, US container-
board production was up 5% com-
pared to the first half of 2020, accord-
ing to the American Forest & Paper
Association. Meanwhile, new mill proj-
ects based on OCC and mixed paper

sive premiums over what many traders
consider the ‘official’ market. Despite
logistical nightmares continuing to dog
export shipments, domestic demand
from containerboard mills remained
strong enough to cause the average
national OCC price to double what it
was a year earlier. A market survey by
The Paper Stock Report indicated an
average national mill buying price of
US$ 194 per ton in August – up from
US$ 153 in July and US$ 93 in August
2020. The strong demand carried into
the mixed paper market as well as
some mills looked to the grade as a
cost-saving substitute for OCC. A year
ago, reasonable quality mixed paper
was selling around US$ 30 per ton
while some suppliers said they were
practically giving it away. In August
2021, mixed paper sales were reported
as high as US$ 100. Groundwood
grades, including overissue news and
sorted clean (deinking quality) news
(SCN) also saw prices escalating. ‘It’s
hard to find tonnage – everything is
accounted for – and throwing more
money at it will generate negligible
new tonnes in the case of OCC and
SCN,’ said one supplier. ‘In the case of
mixed paper, some new materials
might result as prices rise. All markets
are strong, however buyers continue to
‘one up’ each other and the frenzy will
continue until mills are in a position
that it is totally not worth it.’

STABLE EUROPE
August was seen as a stable month for
the European exporters. Demand from
the Middle and Far East is said to be
very weak with Indonesia and India out
of the market for brown grades over
the past two or three months. On the
brighter side, Thailand and Vietnam
are countries which are still placing
orders. Freights rates are also stable
and the struggle to secure containers
continues. Domestically, the European
market is very strong and demand for
all grades is very good. In early
September, this resulted in a price
increase for the lower grades of EUR
10-20 per tonne and even EUR 25-40
per tonne for the middle and higher