Subscribe
market analysis Prices firm in Us and europe Logistical problems hold back trading as domestic markets remain positive. 64 As the US approached its three-day Labor Day holiday weekend at the beginning of September, old corrugat- ...
Read the entire page 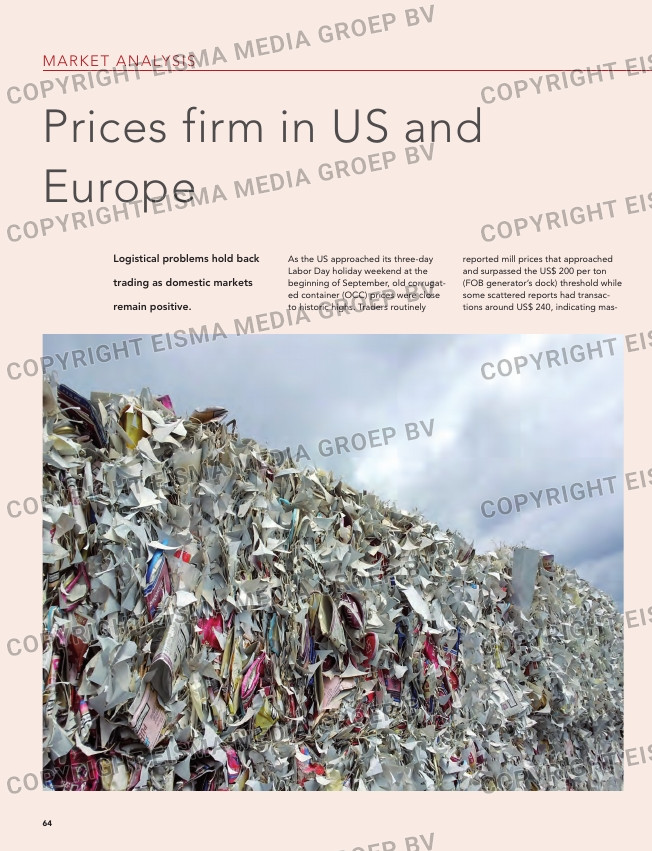 Prices firm in Us and
europe

As the US approached its three-day
Labor Day holiday weekend at the
beginning of September, old corrugat-
ed container (OCC) prices were close
to historic highs. Traders routinely

reported mill prices that approached
and surpassed the US$ 200 per ton
(FOB generator’s dock) threshold while
some scattered reports had transac-
tions around US$ 240, indicating mas-

sive premiums over what many traders
consider the ‘official’ market. Despite
logistical nightmares continuing to dog
export shipments, domestic demand
from containerboard mills remained
strong enough to cause the average
national OCC price to double what it
was a year earlier. A market survey by
The Paper Stock Report indicated an
average national mill buying price of
US$ 194 per ton in August – up from
US$ 153 in July and US$ 93 in August
2020. The strong demand carried into
the mixed paper market as well as
some mills looked to the grade as a
cost-saving substitute for OCC. A year
ago, reasonable quality mixed paper
was selling around US$ 30 per ton
while some suppliers said they were
practically giving it away. In August
2021, mixed paper sales were reported
as high as US$ 100. Groundwood
grades, including overissue news and
sorted clean (deinking quality) news
(SCN) also saw prices escalating. ‘It’s
hard to find tonnage – everything is
accounted for – and throwing more
money at it will generate negligible
new tonnes in the case of OCC and
SCN,’ said one supplier. ‘In the case of
mixed paper, some new materials
might result as prices rise. All markets
are strong, however buyers continue to
‘one up’ each other and the frenzy will
continue until mills are in a position
that it is totally not worth it.’

STABLE EUROPE
August was seen as a stable month for
the European exporters. Demand from
the Middle and Far East is said to be
very weak with Indonesia and India out
of the market for brown grades over
the past two or three months. On the
brighter side, Thailand and Vietnam
are countries which are still placing
orders. Freights rates are also stable
and the struggle to secure containers
continues. Domestically, the European
market is very strong and demand for
all grades is very good. In early
September, this resulted in a price
increase for the lower grades of EUR
10-20 per tonne and even EUR 25-40
per tonne for the middle and higher