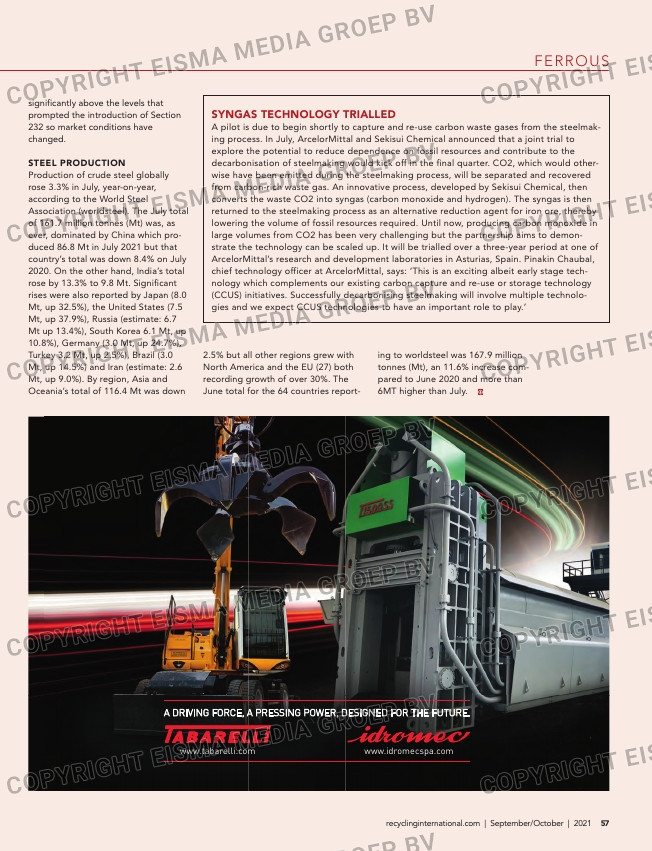 significantly above the levels that
prompted the introduction of Section
232 so market conditions have
changed.

2.5% but all other regions grew with
North America and the EU (27) both
recording growth of over 30%. The
June total for the 64 countries report-

A DRIVING FORCE, A PRESSING POWER, DESIGNED FOR THE FUTURE.

SYNGAS TECHNOLOGY TRIALLED
A pilot is due to begin shortly to capture and re-use carbon waste gases from the steelmak-
ing process. In July, ArcelorMittal and Sekisui Chemical announced that a joint trial to
explore the potential to reduce dependence on fossil resources and contribute to the
decarbonisation of steelmaking would kick off in the final quarter. CO2, which would other-
wise have been emitted during the steelmaking process, will be separated and recovered
from carbon-rich waste gas. An innovative process, developed by Sekisui Chemical, then
converts the waste CO2 into syngas (carbon monoxide and hydrogen). The syngas is then
returned to the steelmaking process as an alternative reduction agent for iron ore, thereby
lowering the volume of fossil resources required. Until now, producing carbon monoxide in
large volumes from CO2 has been very challenging but the partnership aims to demon-
strate the technology can be scaled up. It will be trialled over a three-year period at one of
ArcelorMittal’s research and development laboratories in Asturias, Spain. Pinakin Chaubal,
chief technology officer at ArcelorMittal, says: ‘This is an exciting albeit early stage tech-
nology which complements our existing carbon capture and re-use or storage technology
(CCUS) initiatives. Successfully decarbonising steelmaking will involve multiple technolo-
gies and we expect CCUS technologies to have an important role to play.’