Subscribe
27recyclinginternational.com | September/October | 2021 ITALY COUNTRY REPORT example, we are allowed to ship scrap from the island but we cannot import scrap for treatment on the island. So, basically, the materials we handle are ...
Read the entire page 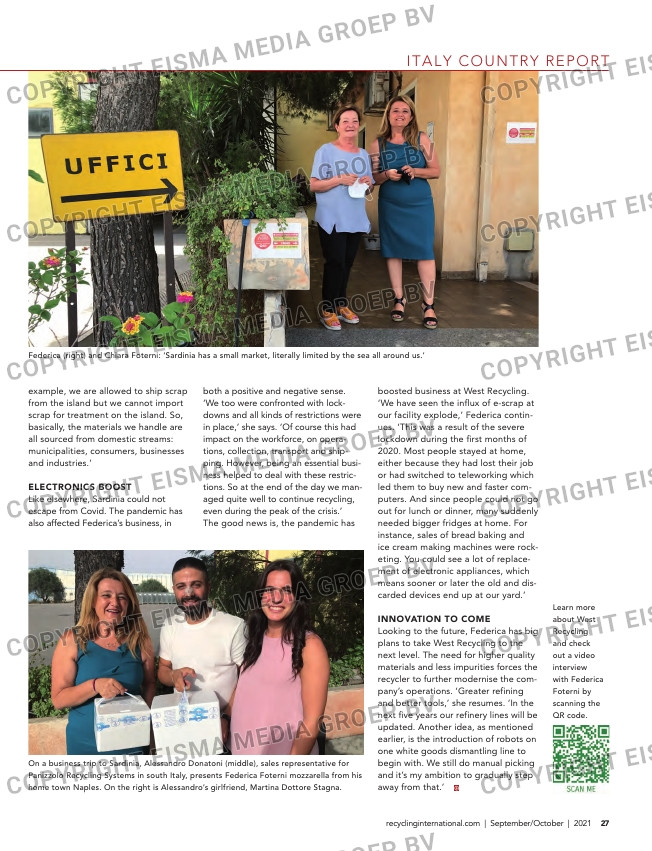 example, we are allowed to ship scrap
from the island but we cannot import
scrap for treatment on the island. So,
basically, the materials we handle are
all sourced from domestic streams:
municipalities, consumers, businesses
and industries.’

ELECTRONICS BOOST
Like elsewhere, Sardinia could not
escape from Covid. The pandemic has
also affected Federica’s business, in

both a positive and negative sense.
‘We too were confronted with lock-
downs and all kinds of restrictions were
in place,’ she says. ‘Of course this had
impact on the workforce, on opera-
tions, collection, transport and ship-
ping. However, being an essential busi-
ness helped to deal with these restric-
tions. So at the end of the day we man-
aged quite well to continue recycling,
even during the peak of the crisis.’
The good news is, the pandemic has

boosted business at West Recycling.
‘We have seen the influx of e-scrap at
our facility explode,’ Federica contin-
ues. ‘This was a result of the severe
lockdown during the first months of
2020. Most people stayed at home,
either because they had lost their job
or had switched to teleworking which
led them to buy new and faster com-
puters. And since people could not go
out for lunch or dinner, many suddenly
needed bigger fridges at home. For
instance, sales of bread baking and
ice cream making machines were rock-
eting. You could see a lot of replace-
ment of electronic appliances, which
means sooner or later the old and dis-
carded devices end up at our yard.’

INNOVATION TO COME
Looking to the future, Federica has big
plans to take West Recycling to the
next level. The need for higher quality
materials and less impurities forces the
recycler to further modernise the com-
pany’s operations. ‘Greater refining
and better tools,’ she resumes. ‘In the
next five years our refinery lines will be
updated. Another idea, as mentioned
earlier, is the introduction of robots on
one white goods dismantling line to
begin with. We still do manual picking
and it’s my ambition to gradually step
away from that.’

Learn more
about West
Recycling
and check
out a video
interview
with Federica
Foterni by
scanning the
QR code.

Federica (right) and Chiara Foterni: ‘Sardinia has a small market, literally limited by the sea all around us.’