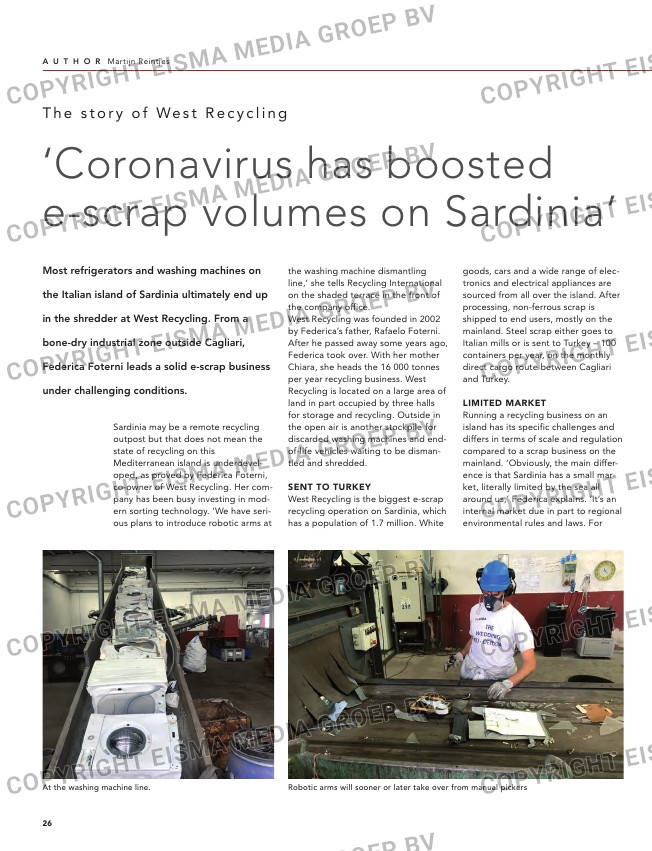 Most refrigerators and washing machines on

the Italian island of Sardinia ultimately end up

in the shredder at West Recycling. From a

under challenging conditions. example, we are allowed to ship scrap
from the island but we cannot import
scrap for treatment on the island. So,
basically, the materials we handle are
all sourced from domestic streams:
municipalities, consumers, businesses
and industries.’

ELECTRONICS BOOST
Like elsewhere, Sardinia could not
escape from Covid. The pandemic has
also affected Federica’s business, in

Sardinia may be a remote recycling
outpost but that does not mean the
state of recycling on this
Mediterranean island is underdevel-
oped, as proved by Federica Foterni,
co-owner of West Recycling. Her com-
pany has been busy investing in mod-
ern sorting technology. ‘We have seri-
ous plans to introduce robotic arms at

the washing machine dismantling
line,’ she tells Recycling International
on the shaded terrace in the front of
the company office.
West Recycling was founded in 2002
by Federica’s father, Rafaelo Foterni.
After he passed away some years ago,
Federica took over. With her mother
Chiara, she heads the 16 000 tonnes
per year recycling business. West
Recycling is located on a large area of
land in part occupied by three halls
for storage and recycling. Outside in
the open air is another stockpile for
discarded washing machines and end-
of-life vehicles waiting to be disman-
tled and shredded.

SENT TO TURKEY
West Recycling is the biggest e-scrap
recycling operation on Sardinia, which
has a population of 1.7 million. White

goods, cars and a wide range of elec-
tronics and electrical appliances are
sourced from all over the island. After
processing, non-ferrous scrap is
shipped to end users, mostly on the
mainland. Steel scrap either goes to
Italian mills or is sent to Turkey – 100
containers per year, on the monthly
direct cargo route between Cagliari
and Turkey.

LIMITED MARKET
Running a recycling business on an
island has its specific challenges and
differs in terms of scale and regulation
compared to a scrap business on the
mainland. ‘Obviously, the main differ-
ence is that Sardinia has a small mar-
ket, literally limited by the sea all
around us,’ Federica explains. ‘It’s an
internal market due in part to regional
environmental rules and laws. For

At the washing machine line. Robotic arms will sooner or later take over from manual pickers

Federica (right) and Chiara Foterni: ‘Sardinia has a small market, literally limited by the sea all around us.’