Subscribe
23recyclinginternational.com | September/October | 2021 ITALY COUNTRY REPORT men proved creative enough to suc- cessfully build their own tools and machines. ‘Creations out of necessity,’ explains Mauro. ‘We could not really ...
Read the entire page 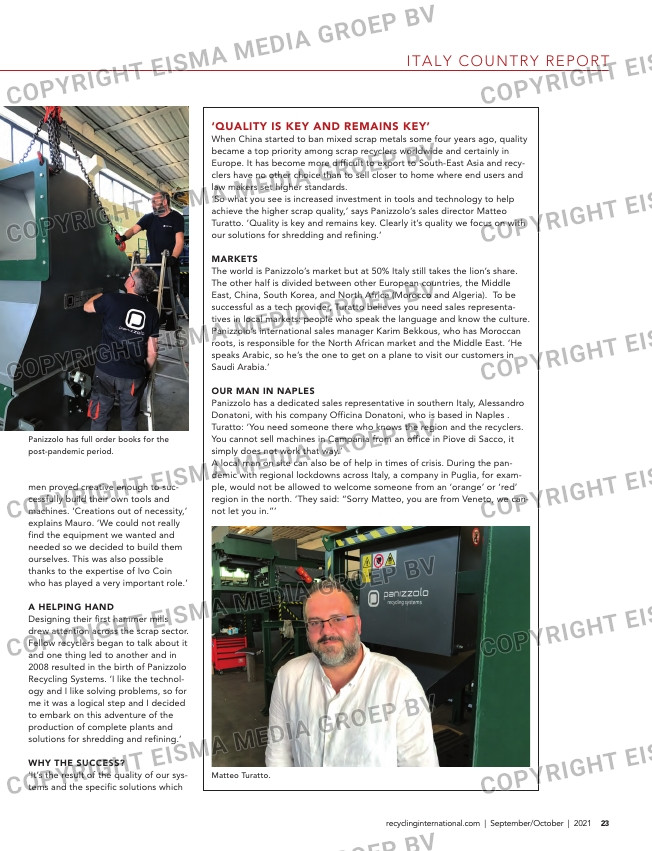 men proved creative enough to suc-
cessfully build their own tools and
machines. ‘Creations out of necessity,’
explains Mauro. ‘We could not really
find the equipment we wanted and
needed so we decided to build them
ourselves. This was also possible
thanks to the expertise of Ivo Coin
who has played a very important role.’

A HELPING HAND
Designing their first hammer mills
drew attention across the scrap sector.
Fellow recyclers began to talk about it
and one thing led to another and in
2008 resulted in the birth of Panizzolo
Recycling Systems. ‘I like the technol-
ogy and I like solving problems, so for
me it was a logical step and I decided
to embark on this adventure of the
production of complete plants and
solutions for shredding and refining.’

WHY THE SUCCESS?
‘It’s the result of the quality of our sys-
tems and the specific solutions which

‘QUALITY IS KEY AND rEMAINS KEY’
When China started to ban mixed scrap metals some four years ago, quality
became a top priority among scrap recyclers worldwide and certainly in
Europe. It has become more difficult to export to South-East Asia and recy-
clers have no other choice than to sell closer to home where end users and
law makers set higher standards.
‘So what you see is increased investment in tools and technology to help
achieve the higher scrap quality,’ says Panizzolo’s sales director Matteo
Turatto. ‘Quality is key and remains key. Clearly it’s quality we focus on with
our solutions for shredding and refining.’

MArKETS
The world is Panizzolo’s market but at 50% Italy still takes the lion’s share.
The other half is divided between other European countries, the Middle
East, China, South Korea, and North Africa (Morocco and Algeria). To be
successful as a tech provider, Turatto believes you need sales representa-
tives in local markets: people who speak the language and know the culture.
Panizzolo’s international sales manager Karim Bekkous, who has Moroccan
roots, is responsible for the North African market and the Middle East. ‘He
speaks Arabic, so he’s the one to get on a plane to visit our customers in
Saudi Arabia.’

oUr MAN IN NAPLES
Panizzolo has a dedicated sales representative in southern Italy, Alessandro
Donatoni, with his company Officina Donatoni, who is based in Naples .
Turatto: ‘You need someone there who knows the region and the recyclers.
You cannot sell machines in Campania from an office in Piove di Sacco, it
simply does not work that way.’
A local man on site can also be of help in times of crisis. During the pan-
demic with regional lockdowns across Italy, a company in Puglia, for exam-
ple, would not be allowed to welcome someone from an ‘orange’ or ‘red’
region in the north. ‘They said: “Sorry Matteo, you are from Veneto, we can-
not let you in.”’

Panizzolo has full order books for the
post-pandemic period.