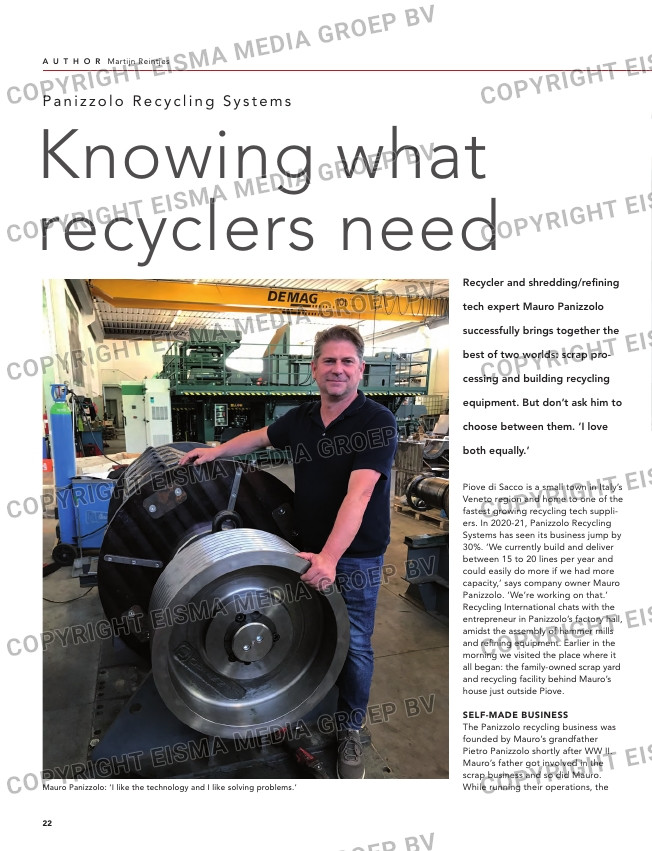 successfully brings together the

equipment. But don’t ask him to

choose between them. ‘I love

men proved creative enough to suc-
cessfully build their own tools and
machines. ‘Creations out of necessity,’
explains Mauro. ‘We could not really
find the equipment we wanted and
needed so we decided to build them
ourselves. This was also possible
thanks to the expertise of Ivo Coin
who has played a very important role.’

A HELPING HAND
Designing their first hammer mills
drew attention across the scrap sector.
Fellow recyclers began to talk about it
and one thing led to another and in
2008 resulted in the birth of Panizzolo
Recycling Systems. ‘I like the technol-
ogy and I like solving problems, so for
me it was a logical step and I decided
to embark on this adventure of the
production of complete plants and
solutions for shredding and refining.’

WHY THE SUCCESS?
‘It’s the result of the quality of our sys-
tems and the specific solutions which

Piove di Sacco is a small town in Italy’s
Veneto region and home to one of the
fastest growing recycling tech suppli-
ers. In 2020-21, Panizzolo Recycling
Systems has seen its business jump by
30%. ‘We currently build and deliver
between 15 to 20 lines per year and
could easily do more if we had more
capacity,’ says company owner Mauro
Panizzolo. ‘We’re working on that.’
Recycling International chats with the
entrepreneur in Panizzolo’s factory hall,
amidst the assembly of hammer mills
and refining equipment. Earlier in the
morning we visited the place where it
all began: the family-owned scrap yard
and recycling facility behind Mauro’s
house just outside Piove.

SELF-MADE BUSINESS
The Panizzolo recycling business was
founded by Mauro’s grandfather
Pietro Panizzolo shortly after WW II.
Mauro’s father got involved in the
scrap business and so did Mauro.
While running their operations, the

Panizzolo has full order books for the
post-pandemic period.