Subscribe
20 A new home for Com.Steel Based near Bergamo in northern Italy, Com.Steel is among the country’s biggest metal recyclers, handling some 700 000 tonnes of ferrous scrap every year. The company has recently moved to a new facility c...
Read the entire page 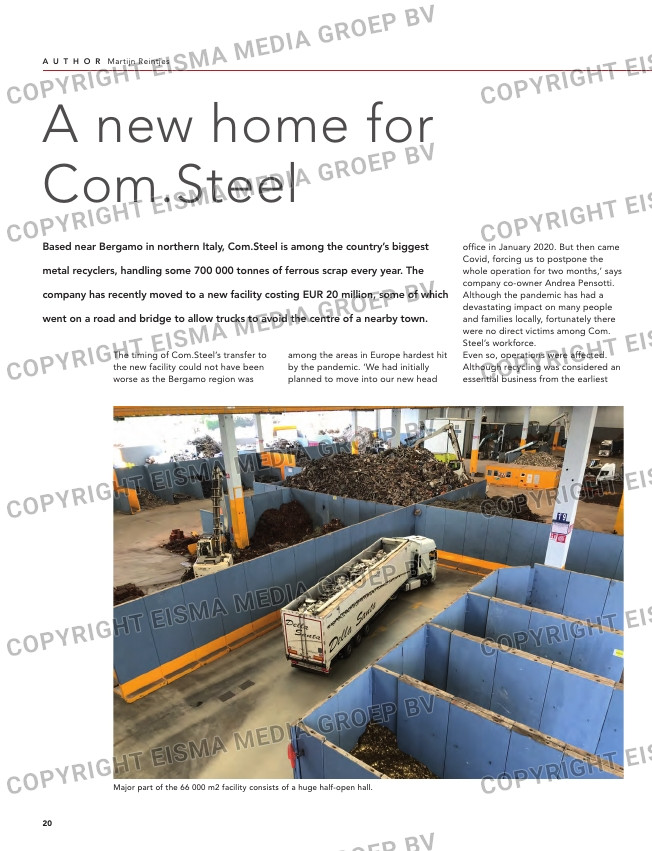 A new home for
Com.Steel
Based near Bergamo in northern Italy, Com.Steel is among the country’s biggest

metal recyclers, handling some 700 000 tonnes of ferrous scrap every year. The

company has recently moved to a new facility costing EUR 20 million, some of which

went on a road and bridge to allow trucks to avoid the centre of a nearby town.

stages of the pandemic, the company
had to deal with a major and severe
lockdown all over Italy. ‘There was a
transport issue and we received much
less scrap from manufacturers who
had downsized production,’ Pensotti
explains.

BACK TO NORMAL
But after two months, markets began
to open up and business picked up
again rapidly. ‘In fact, in the past 12
months we have seen only growth,’
says Pensotti. ‘High demand; high
prices. So despite a tough year for all
of us, I think as a
company we’ve done pretty well.’
Inaugurated in January 2021, the new
66 000 m2 facility consists of a huge
half-open hall where trucks loaded
with scrap come and go. ‘On average
we receive 330 truckloads per day,’
says the recycler. EUR 20 million was
invested in the new facility, of which
EUR 3 million was spent on a road and
bridge to allow vehicles to bypass the
centre of a nearby town, Calusco
d’Adda.

GROWING BIGGER
Finding a new home was necessary as
the company has seen volumes
increase rapidly over the years. ‘There
was no other choice than to ramp up
capacity and create new and
advanced types of production and
separation cycles, such as using our
new installed Panizzolo Mega 1500
hammer to handle among other scrap
materials the 2 000 tonnes of steel
cans coming in per month,’ says
Pensotti. ‘There was no room for
expansion at the previous location;
now we have 700 000 tonnes capacity
and already know we will need more.
So we have asked permission to re-
open the original site.’

A NEW REALITY
Steel.Com is ready for the future, says
Pensotti. A future where more and
more scrap will find a second life in
domestic production rather than out-
side Italy. ‘Before 2017 we shipped a
lot of material to China. Now we see
the demand for material within Italy
increasing.’

The timing of Com.Steel’s transfer to
the new facility could not have been
worse as the Bergamo region was

among the areas in Europe hardest hit
by the pandemic. ‘We had initially
planned to move into our new head

office in January 2020. But then came
Covid, forcing us to postpone the
whole operation for two months,’ says
company co-owner Andrea Pensotti.
Although the pandemic has had a
devastating impact on many people
and families locally, fortunately there
were no direct victims among Com.
Steel’s workforce.
Even so, operations were affected.
Although recycling was considered an
essential business from the earliest

Major part of the 66 000 m2 facility consists of a huge half-open hall.