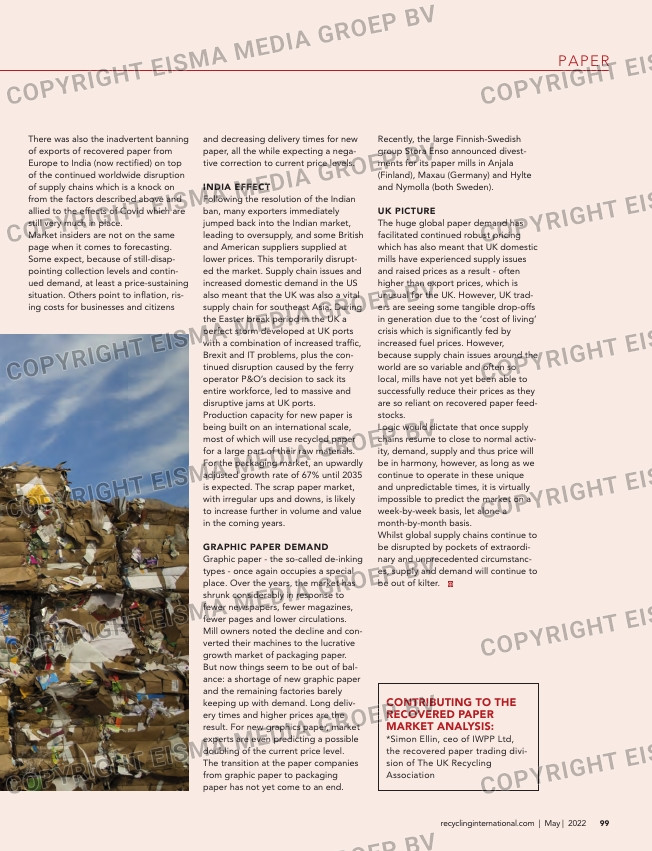 UK PICTURE
The huge global paper demand has
facilitated continued robust pricing
which has also meant that UK domestic
mills have experienced supply issues
and raised prices as a result – often
higher than export prices, which is
unusual for the UK. However, UK trad-
ers are seeing some tangible drop-offs
in generation due to the ‘cost of living’
crisis which is significantly fed by
increased fuel prices. However,
because supply chain issues around the
world are so variable and often so
local, mills have not yet been able to
successfully reduce their prices as they
are so reliant on recovered paper feed-
stocks.
Logic would dictate that once supply
chains resume to close to normal activ-
ity, demand, supply and thus price will
be in harmony, however, as long as we
continue to operate in these unique
and unpredictable times, it is virtually
impossible to predict the market on a
week-by-week basis, let alone a
month-by-month basis.
Whilst global supply chains continue to
be disrupted by pockets of extraordi-
nary and unprecedented circumstanc-
es, supply and demand will continue to
be out of kilter.

and decreasing delivery times for new
paper, all the while expecting a nega-
tive correction to current price levels.

INDIA EFFECT
Following the resolution of the Indian
ban, many exporters immediately
jumped back into the Indian market,
leading to oversupply, and some British
and American suppliers supplied at
lower prices. This temporarily disrupt-
ed the market. Supply chain issues and
increased domestic demand in the US
also meant that the UK was also a vital
supply chain for southeast Asia. During
the Easter break period in the UK a
perfect storm developed at UK ports
with a combination of increased traffic,
Brexit and IT problems, plus the con-
tinued disruption caused by the ferry
operator P&O’s decision to sack its
entire workforce, led to massive and
disruptive jams at UK ports.
Production capacity for new paper is
being built on an international scale,
most of which will use recycled paper
for a large part of their raw materials.
For the packaging market, an upwardly
adjusted growth rate of 67% until 2035
is expected. The scrap paper market,
with irregular ups and downs, is likely
to increase further in volume and value
in the coming years.

GRAPHIC PAPER DEMAND
Graphic paper – the so-called de-inking
types – once again occupies a special
place. Over the years, the market has
shrunk considerably in response to
fewer newspapers, fewer magazines,
fewer pages and lower circulations.
Mill owners noted the decline and con-
verted their machines to the lucrative
growth market of packaging paper.
But now things seem to be out of bal-
ance: a shortage of new graphic paper
and the remaining factories barely
keeping up with demand. Long deliv-
ery times and higher prices are the
result. For new graphics paper, market
experts are even predicting a possible
doubling of the current price level.
The transition at the paper companies
from graphic paper to packaging
paper has not yet come to an end.

There was also the inadvertent banning
of exports of recovered paper from
Europe to India (now rectified) on top
of the continued worldwide disruption
of supply chains which is a knock on
from the factors described above and
allied to the effects of Covid which are
still very much in place.
Market insiders are not on the same
page when it comes to forecasting.
Some expect, because of still-disap-
pointing collection levels and contin-
ued demand, at least a price-sustaining
situation. Others point to inflation, ris-
ing costs for businesses and citizens