Subscribe
FERROUS 89recyclinginternational.com | May/June | 2022 With US mills running at full capacity, Irepas expects any increase in demand to be met by imports. It notes prices in the US are also on an upward trend, catching up with the...
Read the entire page 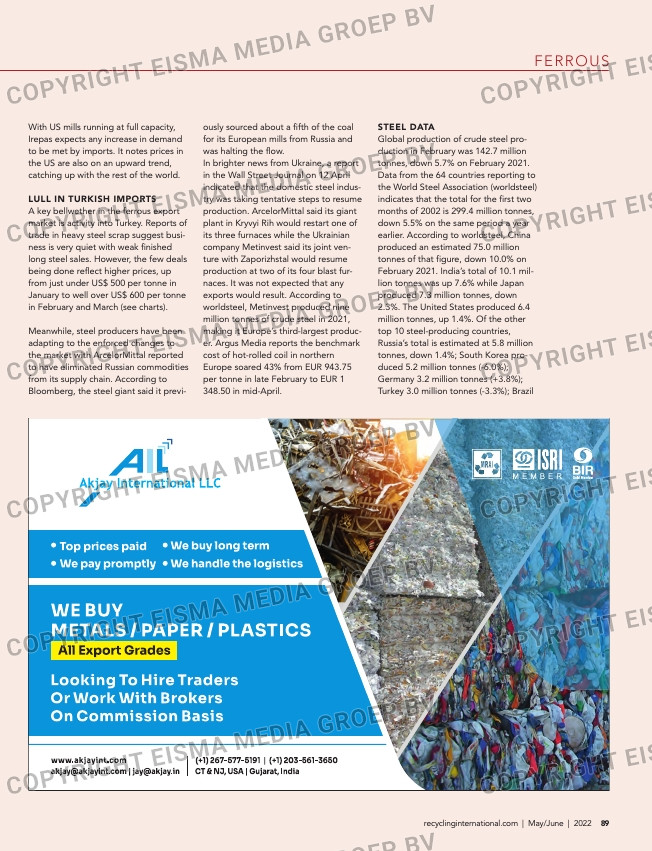 With US mills running at full capacity,
Irepas expects any increase in demand
to be met by imports. It notes prices in
the US are also on an upward trend,
catching up with the rest of the world.

LULL IN TURKISH IMPORTS
A key bellwether in the ferrous export
market is activity into Turkey. Reports of
trade in heavy steel scrap suggest busi-
ness is very quiet with weak finished
long steel sales. However, the few deals
being done reflect higher prices, up
from just under US$ 500 per tonne in
January to well over US$ 600 per tonne
in February and March (see charts).

Meanwhile, steel producers have been
adapting to the enforced changes to
the market with ArcelorMittal reported
to have eliminated Russian commodities
from its supply chain. According to
Bloomberg, the steel giant said it previ-

ously sourced about a fifth of the coal
for its European mills from Russia and
was halting the flow.
In brighter news from Ukraine, a report
in the Wall Street Journal on 12 April
indicated that the domestic steel indus-
try was taking tentative steps to resume
production. ArcelorMittal said its giant
plant in Kryvyi Rih would restart one of
its three furnaces while the Ukrainian
company Metinvest said its joint ven-
ture with Zaporizhstal would resume
production at two of its four blast fur-
naces. It was not expected that any
exports would result. According to
worldsteel, Metinvest produced nine
million tonnes of crude steel in 2021,
making it Europe’s third-largest produc-
er. Argus Media reports the benchmark
cost of hot-rolled coil in northern
Europe soared 43% from EUR 943.75
per tonne in late February to EUR 1
348.50 in mid-April.