Subscribe
58 ‘No choice other than a negative incentive’ S c r a p f i re s c a u s e m a j o r h e a d a c h e s After yet another scrap fire caused by a lithium battery, Dutch metal recycler Regelink has had enough. From now on, EUR...
Read the entire page 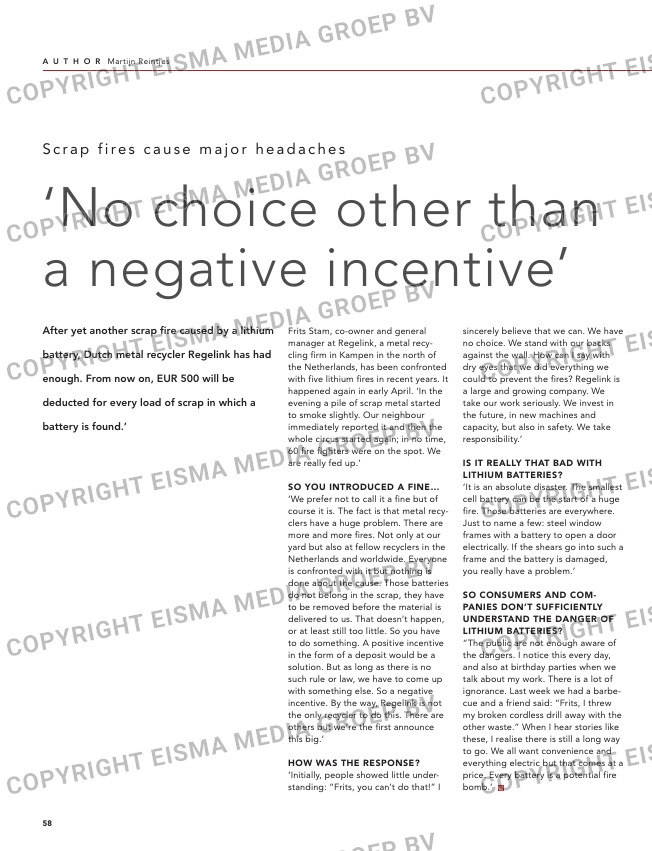 ‘No choice other than
a negative incentive’

After yet another scrap fire caused by a lithium

deducted for every load of scrap in which a

Frits Stam, co-owner and general
manager at Regelink, a metal recy-
cling firm in Kampen in the north of
the Netherlands, has been confronted
with five lithium fires in recent years. It
happened again in early April. ‘In the
evening a pile of scrap metal started
to smoke slightly. Our neighbour
immediately reported it and then the
whole circus started again; in no time,
60 fire fighters were on the spot. We
are really fed up.’

SO YOU INTRODUCED A FINE…
‘We prefer not to call it a fine but of
course it is. The fact is that metal recy-
clers have a huge problem. There are
more and more fires. Not only at our
yard but also at fellow recyclers in the
Netherlands and worldwide. Everyone
is confronted with it but nothing is
done about the cause. Those batteries
do not belong in the scrap, they have
to be removed before the material is
delivered to us. That doesn’t happen,
or at least still too little. So you have
to do something. A positive incentive
in the form of a deposit would be a
solution. But as long as there is no
such rule or law, we have to come up
with something else. So a negative
incentive. By the way, Regelink is not
the only recycler to do this. There are
others but we’re the first announce
this big.’

HOW WAS THE RESPONSE?
‘Initially, people showed little under-
standing: “Frits, you can’t do that!” I

sincerely believe that we can. We have
no choice. We stand with our backs
against the wall. How can I say with
dry eyes that we did everything we
could to prevent the fires? Regelink is
a large and growing company. We
take our work seriously. We invest in
the future, in new machines and
capacity, but also in safety. We take
responsibility.’

IS IT REALLY THAT BAD WITH
LITHIUM BATTERIES?
‘It is an absolute disaster. The smallest
cell battery can be the start of a huge
fire. Those batteries are everywhere.
Just to name a few: steel window
frames with a battery to open a door
electrically. If the shears go into such a
frame and the battery is damaged,
you really have a problem.’

SO CONSUMERS AND COM-
PANIES DON’T SUFFICIENTLY
UNDERSTAND THE DANGER OF
LITHIUM BATTERIES?
“The public are not enough aware of
the dangers. I notice this every day,
and also at birthday parties when we
talk about my work. There is a lot of
ignorance. Last week we had a barbe-
cue and a friend said: “Frits, I threw
my broken cordless drill away with the
other waste.” When I hear stories like
these, I realise there is still a long way
to go. We all want convenience and
everything electric but that comes at a
price. Every battery is a potential fire
bomb.’