Subscribe
38 US FOCUS FOR STEINERT Germany’s sorting technology specialist Steinert was well represented in Las Vegas. It used the opportunity to announce expansion into the US, led by newly appointed vice president Robert Broughton. He entered ...
Read the entire page 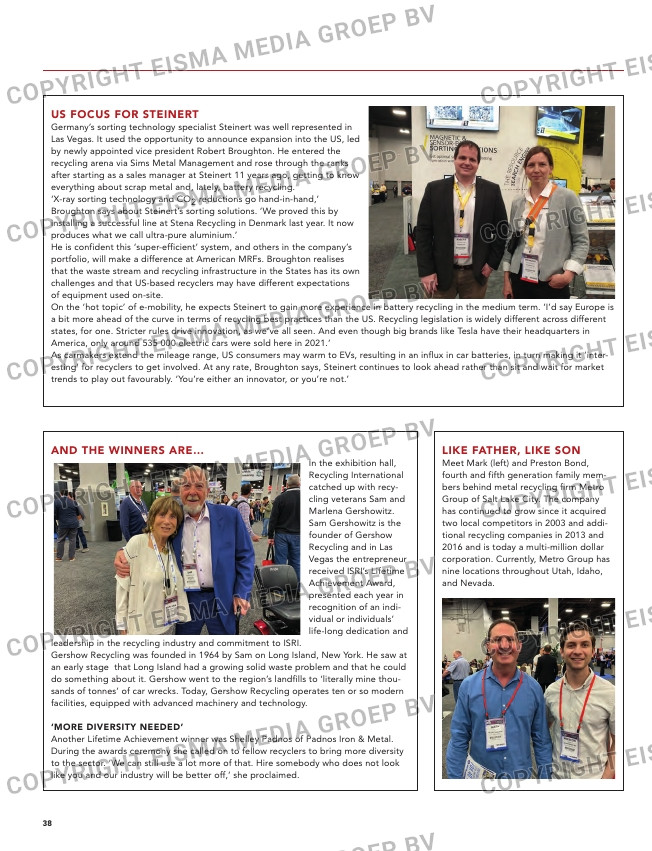 US FOCUS FOR STEINERT
Germany’s sorting technology specialist Steinert was well represented in
Las Vegas. It used the opportunity to announce expansion into the US, led
by newly appointed vice president Robert Broughton. He entered the
recycling arena via Sims Metal Management and rose through the ranks
after starting as a sales manager at Steinert 11 years ago, getting to know
everything about scrap metal and, lately, battery recycling.
‘X-ray sorting technology and CO2 reductions go hand-in-hand,’
Broughton says about Steinert’s sorting solutions. ‘We proved this by
installing a successful line at Stena Recycling in Denmark last year. It now
produces what we call ultra-pure aluminium.’
He is confident this ‘super-efficient’ system, and others in the company’s
portfolio, will make a difference at American MRFs. Broughton realises
that the waste stream and recycling infrastructure in the States has its own
challenges and that US-based recyclers may have different expectations
of equipment used on-site.
On the ‘hot topic’ of e-mobility, he expects Steinert to gain more experience in battery recycling in the medium term. ‘I’d say Europe is
a bit more ahead of the curve in terms of recycling best practices than the US. Recycling legislation is widely different across different
states, for one. Stricter rules drive innovation, as we’ve all seen. And even though big brands like Tesla have their headquarters in
America, only around 535 000 electric cars were sold here in 2021.’
As carmakers extend the mileage range, US consumers may warm to EVs, resulting in an influx in car batteries, in turn making it ‘inter-
esting’ for recyclers to get involved. At any rate, Broughton says, Steinert continues to look ahead rather than sit and wait for market
trends to play out favourably. ‘You’re either an innovator, or you’re not.’

AND THE WINNERS ARE…
In the exhibition hall,
Recycling International
catched up with recy-
cling veterans Sam and
Marlena Gershowitz.
Sam Gershowitz is the
founder of Gershow
Recycling and in Las
Vegas the entrepreneur
received ISRI’s Lifetime
Achievement Award,
presented each year in
recognition of an indi-
vidual or individuals’
life-long dedication and

leadership in the recycling industry and commitment to ISRI.
Gershow Recycling was founded in 1964 by Sam on Long Island, New York. He saw at
an early stage that Long Island had a growing solid waste problem and that he could
do something about it. Gershow went to the region’s landfills to ‘literally mine thou-
sands of tonnes’ of car wrecks. Today, Gershow Recycling operates ten or so modern
facilities, equipped with advanced machinery and technology.

‘MORE DIVERSITY NEEDED’
Another Lifetime Achievement winner was Shelley Padnos of Padnos Iron & Metal.
During the awards ceremony she called on to fellow recyclers to bring more diversity
to the sector. ‘We can still use a lot more of that. Hire somebody who does not look
like you and our industry will be better off,’ she proclaimed.

LIKE FATHER, LIKE SON
Meet Mark (left) and Preston Bond,
fourth and fifth generation family mem-
bers behind metal recycling firm Metro
Group of Salt Lake City. The company
has continued to grow since it acquired
two local competitors in 2003 and addi-
tional recycling companies in 2013 and
2016 and is today a multi-million dollar
corporation. Currently, Metro Group has
nine locations throughout Utah, Idaho,
and Nevada.