Subscribe
CONFERENCE REPORT 21recyclinginternational.com | May/June | 2022 to have added domestic recycling capacity of 590 000 tonnes per annum since 2017. This means fibre demand in China increasingly relies on domestic ON THE MOVE Logi...
Read the entire page 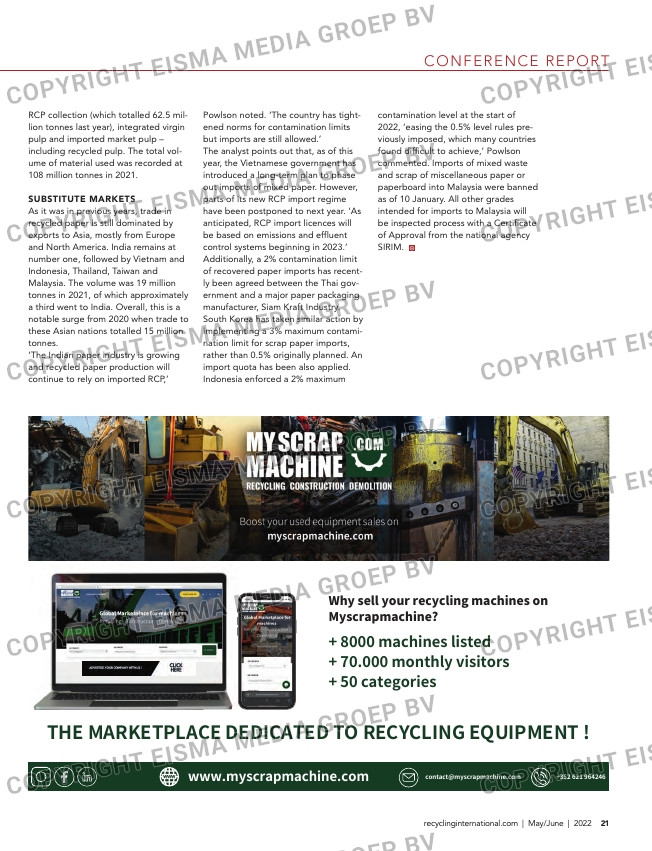 to have added domestic recycling
capacity of 590 000 tonnes per annum
since 2017. This means fibre demand
in China increasingly relies on domestic

ON THE MOVE
Logistics and bulk transport specialist Georg Lennarz presented Innofreight
as an efficient way to move recovered paper, either in bales or shredded.
The company’s InnoWaggon system is ‘specially optimised’ for the recycling
sector, he said, providing easy access to material handlers and easy stacking
properties, having been tried and tested at major paper recyclers in
Germany, Switzerland and Austria, among others.
Lennarz announced that Innofreight had signed a EUR 2 billion memoran-
dum of understanding with Tatravagónka and Budamar Logistics to produce
InnoWaggons over the next ten years. The contract was signed at TZV
Gredelj, Croatia in the presence of Croatian Prime Minister Andrej Plenković.
Under the business deal, at least 1 000 InnoWaggons will be produced per
year. ‘Modern, highly automated and continued top quality will prevent
downtime and enable independence from external suppliers in the value
chain,’ said Lennarz.

SUBSTITUTE MARKETS
As it was in previous years, trade in
recycled paper is still dominated by
exports to Asia, mostly from Europe
and North America. India remains at
number one, followed by Vietnam and
Indonesia, Thailand, Taiwan and
Malaysia. The volume was 19 million
tonnes in 2021, of which approximately
a third went to India. Overall, this is a
notable surge from 2020 when trade to
these Asian nations totalled 15 million
tonnes.
‘The Indian paper industry is growing
and recycled paper production will
continue to rely on imported RCP,’

THE MARKETPLACE DEDICATED TO RECYCLING EQUIPMENT !

Powlson noted. ‘The country has tight-
ened norms for contamination limits
but imports are still allowed.’
The analyst points out that, as of this
year, the Vietnamese government has
introduced a long-term plan to phase
out imports of mixed paper. However,
parts of its new RCP import regime
have been postponed to next year. ‘As
anticipated, RCP import licences will
be based on emissions and effluent
control systems beginning in 2023.’
Additionally, a 2% contamination limit
of recovered paper imports has recent-
ly been agreed between the Thai gov-
ernment and a major paper packaging
manufacturer, Siam Kraft Industry.
South Korea has taken similar action by
implementing a 3% maximum contami-
nation limit for scrap paper imports,
rather than 0.5% originally planned. An
import quota has been also applied.
Indonesia enforced a 2% maximum

contamination level at the start of
2022, ‘easing the 0.5% level rules pre-
viously imposed, which many countries
found difficult to achieve,’ Powlson
commented. Imports of mixed waste
and scrap of miscellaneous paper or
paperboard into Malaysia were banned
as of 10 January. All other grades
intended for imports to Malaysia will
be inspected process with a Certificate
of Approval from the national agency
SIRIM.