Subscribe
20 ‘The best way forward is accepting that times – turbulent as they may be – are changing and we have to change with them,’ Powlson said of the dynamic and ‘highly unpredictable’ market situ- ation. ‘The good news is ...
Read the entire page 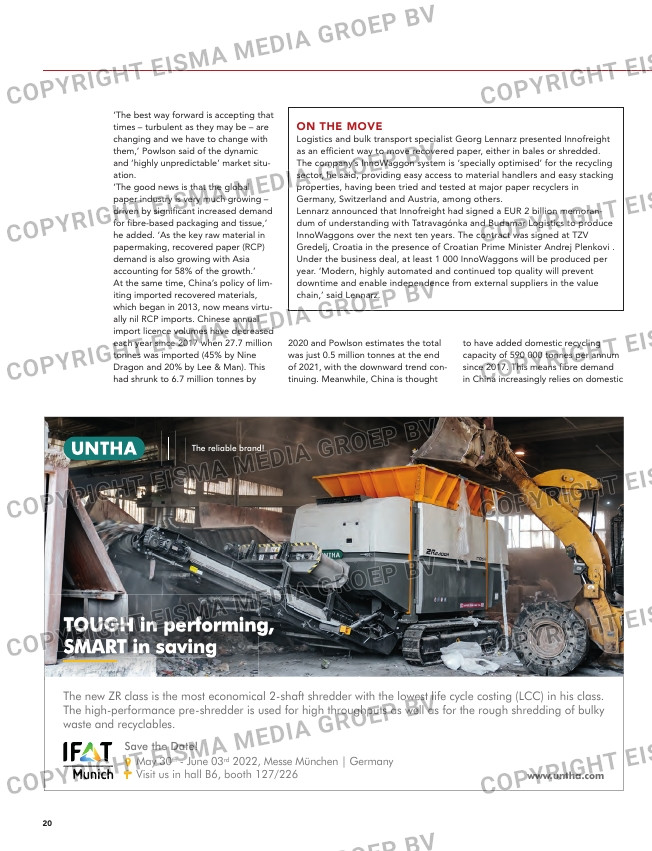 ‘The best way forward is accepting that
times – turbulent as they may be – are
changing and we have to change with
them,’ Powlson said of the dynamic
and ‘highly unpredictable’ market situ-
ation.
‘The good news is that the global
paper industry is very much growing –
driven by significant increased demand
for fibre-based packaging and tissue,’
he added. ‘As the key raw material in
papermaking, recovered paper (RCP)
demand is also growing with Asia
accounting for 58% of the growth.’
At the same time, China’s policy of lim-
iting imported recovered materials,
which began in 2013, now means virtu-
ally nil RCP imports. Chinese annual
import licence volumes have decreased
each year since 2017 when 27.7 million
tonnes was imported (45% by Nine
Dragon and 20% by Lee & Man). This
had shrunk to 6.7 million tonnes by

2020 and Powlson estimates the total
was just 0.5 million tonnes at the end
of 2021, with the downward trend con-
tinuing. Meanwhile, China is thought

to have added domestic recycling
capacity of 590 000 tonnes per annum
since 2017. This means fibre demand
in China increasingly relies on domestic

ON THE MOVE
Logistics and bulk transport specialist Georg Lennarz presented Innofreight
as an efficient way to move recovered paper, either in bales or shredded.
The company’s InnoWaggon system is ‘specially optimised’ for the recycling
sector, he said, providing easy access to material handlers and easy stacking
properties, having been tried and tested at major paper recyclers in
Germany, Switzerland and Austria, among others.
Lennarz announced that Innofreight had signed a EUR 2 billion memoran-
dum of understanding with Tatravagónka and Budamar Logistics to produce
InnoWaggons over the next ten years. The contract was signed at TZV
Gredelj, Croatia in the presence of Croatian Prime Minister Andrej Plenković.
Under the business deal, at least 1 000 InnoWaggons will be produced per
year. ‘Modern, highly automated and continued top quality will prevent
downtime and enable independence from external suppliers in the value
chain,’ said Lennarz.

SUBSTITUTE MARKETS
As it was in previous years, trade in
recycled paper is still dominated by
exports to Asia, mostly from Europe
and North America. India remains at
number one, followed by Vietnam and
Indonesia, Thailand, Taiwan and
Malaysia. The volume was 19 million
tonnes in 2021, of which approximately
a third went to India. Overall, this is a
notable surge from 2020 when trade to
these Asian nations totalled 15 million
tonnes.
‘The Indian paper industry is growing
and recycled paper production will
continue to rely on imported RCP,’

The new ZR class is the most economical 2-shaft shredder with the lowest life cycle costing (LCC) in his class.
The high-performance pre-shredder is used for high throughputs as well as for the rough shredding of bulky
waste and recyclables.

TOUGH in performing,
SMART in saving

THE MARKETPLACE DEDICATED TO RECYCLING EQUIPMENT !