Subscribe
CONFERENCE REPORT 19recyclinginternational.com | May/June | 2022 The Covid pandemic had affected a scrap paper market in transition, according to Werner Steingass, vice- president of the German recycling organisation BVSE when he s...
Read the entire page 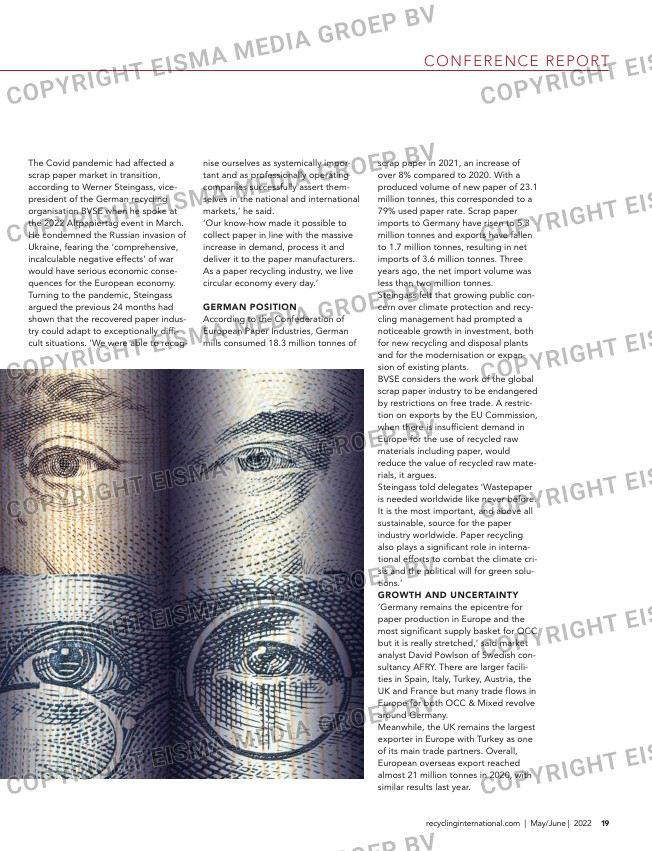 The Covid pandemic had affected a
scrap paper market in transition,
according to Werner Steingass, vice-
president of the German recycling
organisation BVSE when he spoke at
the 2022 Altpapiertag event in March.
He condemned the Russian invasion of
Ukraine, fearing the ‘comprehensive,
incalculable negative effects’ of war
would have serious economic conse-
quences for the European economy.
Turning to the pandemic, Steingass
argued the previous 24 months had
shown that the recovered paper indus-
try could adapt to exceptionally diffi-
cult situations. ‘We were able to recog-

nise ourselves as systemically impor-
tant and as professionally operating
companies successfully assert them-
selves in the national and international
markets,’ he said.
‘Our know-how made it possible to
collect paper in line with the massive
increase in demand, process it and
deliver it to the paper manufacturers.
As a paper recycling industry, we live
circular economy every day.’

GERMAN POSITION
According to the Confederation of
European Paper Industries, German
mills consumed 18.3 million tonnes of

scrap paper in 2021, an increase of
over 8% compared to 2020. With a
produced volume of new paper of 23.1
million tonnes, this corresponded to a
79% used paper rate. Scrap paper
imports to Germany have risen to 5.3
million tonnes and exports have fallen
to 1.7 million tonnes, resulting in net
imports of 3.6 million tonnes. Three
years ago, the net import volume was
less than two million tonnes.
Steingass felt that growing public con-
cern over climate protection and recy-
cling management had prompted a
noticeable growth in investment, both
for new recycling and disposal plants
and for the modernisation or expan-
sion of existing plants.
BVSE considers the work of the global
scrap paper industry to be endangered
by restrictions on free trade. A restric-
tion on exports by the EU Commission,
when there is insufficient demand in
Europe for the use of recycled raw
materials including paper, would
reduce the value of recycled raw mate-
rials, it argues.
Steingass told delegates ‘Wastepaper
is needed worldwide like never before.
It is the most important, and above all
sustainable, source for the paper
industry worldwide. Paper recycling
also plays a significant role in interna-
tional efforts to combat the climate cri-
sis and the political will for green solu-
tions.’
GROWTH AND UNCERTAINTY
‘Germany remains the epicentre for
paper production in Europe and the
most significant supply basket for OCC
but it is really stretched,’ said market
analyst David Powlson of Swedish con-
sultancy AFRY. There are larger facili-
ties in Spain, Italy, Turkey, Austria, the
UK and France but many trade flows in
Europe for both OCC & Mixed revolve
around Germany.
Meanwhile, the UK remains the largest
exporter in Europe with Turkey as one
of its main trade partners. Overall,
European overseas export reached
almost 21 million tonnes in 2020, with
similar results last year. Recovered paper demand is increasing, with Asia accounting for 58% of the growth.