Subscribe
IN THE LABORATORY 103recyclinginternational.com | May/June | 2022 Sunny prospects for silicon PV recycling niche Around 10 000 tonnes of silicon in used solar panels is scrapped in Germany every year. There is no commercial recy...
Read the entire page 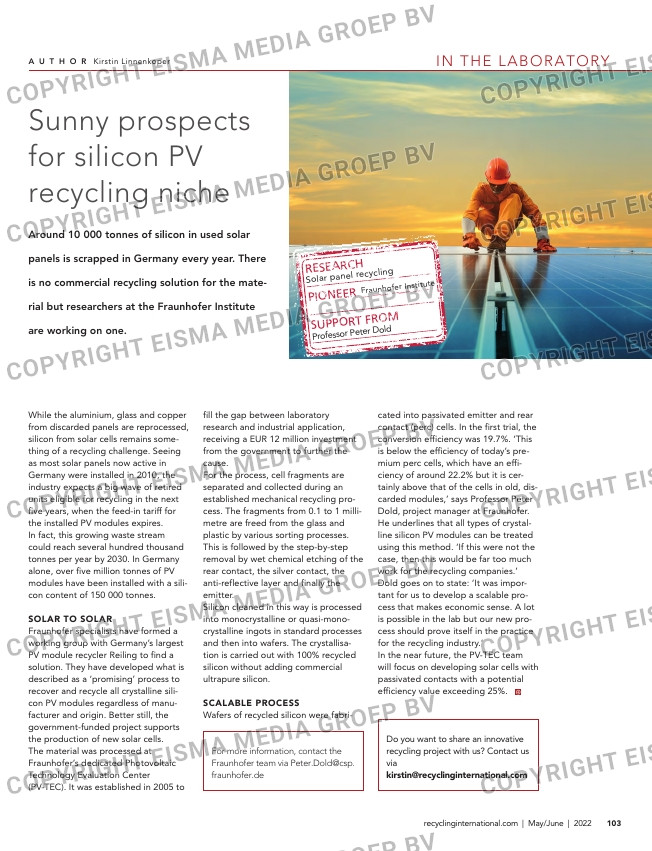 panels is scrapped in Germany every year. There

is no commercial recycling solution for the mate-

rial but researchers at the Fraunhofer Institute

are working on one.

While the aluminium, glass and copper
from discarded panels are reprocessed,
silicon from solar cells remains some-
thing of a recycling challenge. Seeing
as most solar panels now active in
Germany were installed in 2010, the
industry expects a big wave of retired
units eligible for recycling in the next
five years, when the feed-in tariff for
the installed PV modules expires.
In fact, this growing waste stream
could reach several hundred thousand
tonnes per year by 2030. In Germany
alone, over five million tonnes of PV
modules have been installed with a sili-
con content of 150 000 tonnes.

SOLAR TO SOLAR
Fraunhofer specialists have formed a
working group with Germany’s largest
PV module recycler Reiling to find a
solution. They have developed what is
described as a ‘promising’ process to
recover and recycle all crystalline sili-
con PV modules regardless of manu-
facturer and origin. Better still, the
government-funded project supports
the production of new solar cells.
The material was processed at
Fraunhofer’s dedicated Photovoltaic
Technology Evaluation Center
(PV-TEC). It was established in 2005 to

fill the gap between laboratory
research and industrial application,
receiving a EUR 12 million investment
from the government to further the
cause.
For the process, cell fragments are
separated and collected during an
established mechanical recycling pro-
cess. The fragments from 0.1 to 1 milli-
metre are freed from the glass and
plastic by various sorting processes.
This is followed by the step-by-step
removal by wet chemical etching of the
rear contact, the silver contact, the
anti-reflective layer and finally the
emitter.
Silicon cleaned in this way is processed
into monocrystalline or quasi-mono-
crystalline ingots in standard processes
and then into wafers. The crystallisa-
tion is carried out with 100% recycled
silicon without adding commercial
ultrapure silicon.

cated into passivated emitter and rear
contact (perc) cells. In the first trial, the
conversion efficiency was 19.7%. ‘This
is below the efficiency of today’s pre-
mium perc cells, which have an effi-
ciency of around 22.2% but it is cer-
tainly above that of the cells in old, dis-
carded modules,’ says Professor Peter
Dold, project manager at Fraunhofer.
He underlines that all types of crystal-
line silicon PV modules can be treated
using this method. ‘If this were not the
case, then this would be far too much
work for the recycling companies.’
Dold goes on to state: ‘It was impor-
tant for us to develop a scalable pro-
cess that makes economic sense. A lot
is possible in the lab but our new pro-
cess should prove itself in the practice
for the recycling industry.’
In the near future, the PV-TEC team
will focus on developing solar cells with
passivated contacts with a potential
efficiency value exceeding 25%.