Subscribe
MARKET ANALYSIS Gas crisis bears down on recyclers Russia’s withholding of gas supplies means higher energy prices, crippling the smelters that are big customers for secondary non-fer- rous metals. at 50.9, while a similar one for...
Read the entire page 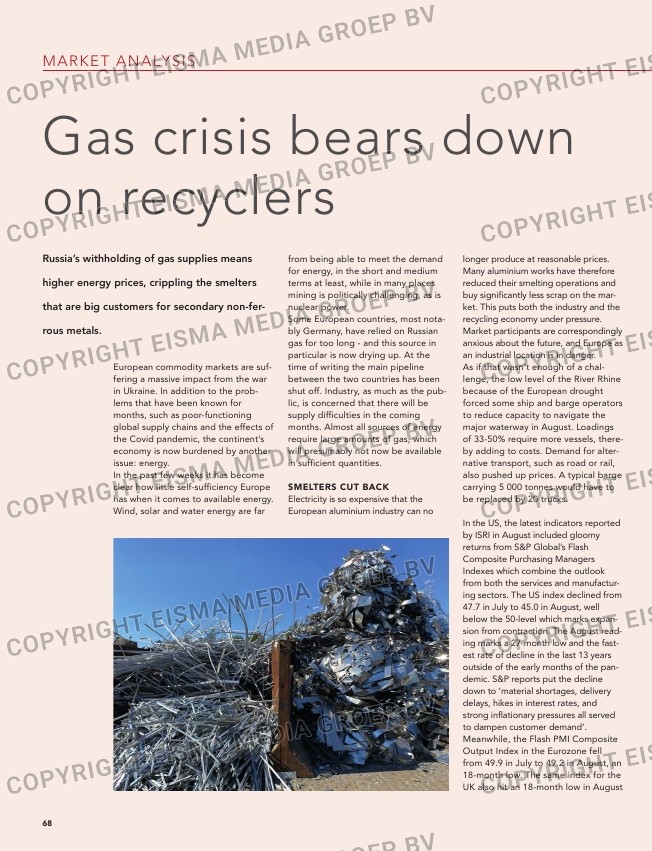 that are big customers for secondary non-fer-

at 50.9, while a similar one for Japan
fell for the first time in six months.

VOLATILITY CONCERN
The bleak outlook for non-ferrous
markets was reflected in the latest
World Mirror from the Bureau of
International Recycling (BIR) which
noted a transformation with metal
prices in recent weeks down 10-30%.
The prognosis was that they remain
vulnerable to the high levels of volatil-
ity. ‘With global headlines dominated
by bad news, metals markets are
deemed unlikely to receive an injec-
tion of confidence and stability in the
near term, especially as holiday peri-
ods are now curtailing business activi-
ty levels in many parts of the world,’
the Mirror comments. It notes that
market challenges include high infla-
tion and interest rate rises; China’s
indebted housing sector; uncertainty
over gas supplies to Europe during
the Ukraine conflict; a growing labour
market crisis; transportation difficul-
ties; and the strength of the US dollar.
The squeeze on energy supplies is
having a major impact on German
industry. BIR also points out that
smelters without long-term energy
supply contracts are facing difficult
times and it warns that smaller opera-
tors could go out of business.
In Ukraine, street collections of brass
are reportedly only a fifth of pre-con-
flict volumes. While domestic copper
collections are covering internal
demand, exports and imports are said
to be non-existent. Meanwhile, scrap
suppliers in Russia are carrying stock
purchased which they are not ready to
move at current market prices
because of a lack of hedging.
Among more positive news reported
is the expectation that India’s GDP will
grow by at least 7% this year while
China has announced plans to
increase ferrous scrap consumption to
320 million tonnes by 2025, along
with a goal of 20 million tonnes of
recycled non-ferrous metals in the
next five years.

FREIGHT RATES EASE?
An accelerating decline in container
spot rates is being seen as evidence

from being able to meet the demand
for energy, in the short and medium
terms at least, while in many places
mining is politically challenging, as is
nuclear power.
Some European countries, most nota-
bly Germany, have relied on Russian
gas for too long – and this source in
particular is now drying up. At the
time of writing the main pipeline
between the two countries has been
shut off. Industry, as much as the pub-
lic, is concerned that there will be
supply difficulties in the coming
months. Almost all sources of energy
require large amounts of gas, which
will presumably not now be available
in sufficient quantities.

longer produce at reasonable prices.
Many aluminium works have therefore
reduced their smelting operations and
buy significantly less scrap on the mar-
ket. This puts both the industry and the
recycling economy under pressure.
Market participants are correspondingly
anxious about the future, and Europe as
an industrial location is in danger.
As if that wasn’t enough of a chal-
lenge, the low level of the River Rhine
because of the European drought
forced some ship and barge operators
to reduce capacity to navigate the
major waterway in August. Loadings
of 33-50% require more vessels, there-
by adding to costs. Demand for alter-
native transport, such as road or rail,
also pushed up prices. A typical barge
carrying 5 000 tonnes would have to
be replaced by 20 trucks.

In the US, the latest indicators reported
by ISRI in August included gloomy
returns from S&P Global’s Flash
Composite Purchasing Managers
Indexes which combine the outlook
from both the services and manufactur-
ing sectors. The US index declined from
47.7 in July to 45.0 in August, well
below the 50-level which marks expan-
sion from contraction. The August read-
ing marks a 27-month low and the fast-
est rate of decline in the last 13 years
outside of the early months of the pan-
demic. S&P reports put the decline
down to ‘material shortages, delivery
delays, hikes in interest rates, and
strong inflationary pressures all served
to dampen customer demand’.
Meanwhile, the Flash PMI Composite
Output Index in the Eurozone fell
from 49.9 in July to 49.2 in August, an
18-month low. The same index for the
UK also hit an 18-month low in August

European commodity markets are suf-
fering a massive impact from the war
in Ukraine. In addition to the prob-
lems that have been known for
months, such as poor-functioning
global supply chains and the effects of
the Covid pandemic, the continent’s
economy is now burdened by another
issue: energy.
In the past few weeks it has become
clear how little self-sufficiency Europe
has when it comes to available energy.
Wind, solar and water energy are far