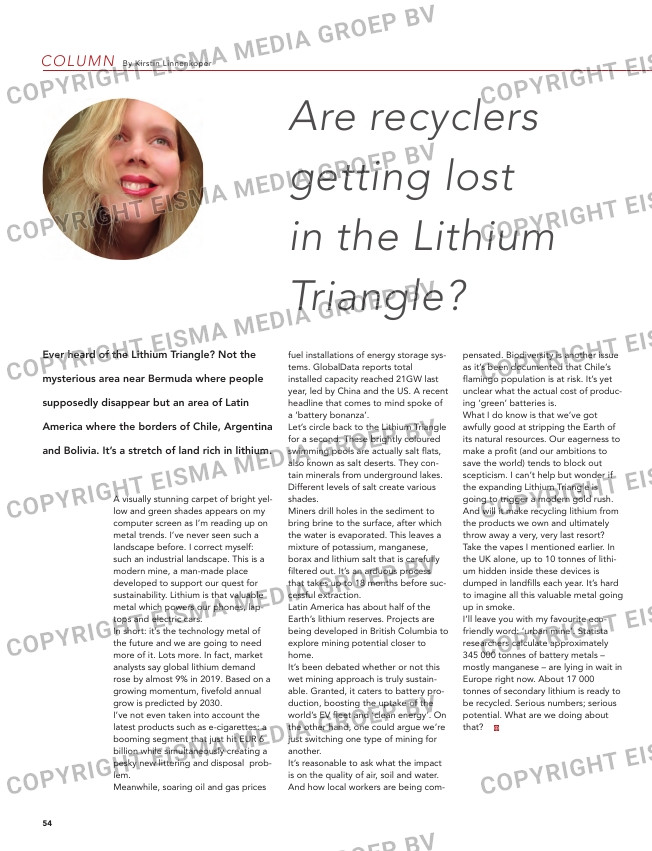 Their trade association,
UK Steel, has published
‘Net Zero Steel: A
Vision for the Future of
UK Steel Production’,
to demonstrate the
potential opportunity.
Steel production
accounts for 15% of UK
emissions.
The report says that net

zero steel production will increase electricity use but industrial elec-
tricity prices are a key barrier with steelmakers in the UK paying
almost 60% more than their European counterparts. It notes that
UK demand for steel is expected to grow by 2030, presenting an
opportunity to reindustrialise and create green jobs. But it warns
that a market for net zero steel must be supported by restrictions
insuring imported, high-emission steel does not undermine domes-
tic investment.
‘Globally, no steel sector has yet decarbonised – the UK can secure
a tremendous first-mover advantage,’ it concludes.
The Government has targeted a 95% emission reduction from steel-
making by 2050, while the UK’s official watchdog, the Climate
Change Committee, wants emissions from ore-based steelmaking
be near zero by 2035.

GREEN JOBS
UK Steel dg Gareth Stace says: ‘Delivering net zero in this strategic
sector is a generational challenge which will need far-sighted sup-
port from Government and a positive policy environment to
achieve. As we look ahead to a change in Government, it is essen-
tial that the current focus on our sector is not dropped.
‘No steel sector or steel company in the world has yet successfully
decarbonised. If we accomplish this, we will transform almost 35
000 steel jobs into green jobs.’
Stace points out there is a range of technologies to decarbonise,
including electrified steelmaking, carbon capture and storage and
hydrogen.
‘We export much of our scrap steel only to reimport it, meaning
there is fertile ground for electric arc steelmaking. Our location
near the North Sea means we are perfectly placed to harness cost-
effective carbon capture and storage steelmaking. In the future,
hydrogen-based steelmaking may also become more attractive.’

GO FOR SCRAP
A second report, ‘Building the Future – a faster route clean steel’,
was published a day earlier by the cross-party UK environmental
thinktank, the Green Alliance. It identifies how ‘huge and rapid
emissions cuts’ are possible by shifting more steel production
towards electric arc furnaces using steel scrap.
‘Hydrogen-based processes, aided by electrification, can make
higher quality but lower carbon virgin steel where it is still needed
for some uses. Moving swiftly to clean steel production will safe-
guard the industry, bring down emissions and create good jobs.’

Are recyclers
getting lost
in the Lithium
Triangle?

Ever heard of the Lithium Triangle? Not the

mysterious area near Bermuda where people

supposedly disappear but an area of Latin

America where the borders of Chile, Argentina

and Bolivia. It’s a stretch of land rich in lithium.

A visually stunning carpet of bright yel-
low and green shades appears on my
computer screen as I’m reading up on
metal trends. I’ve never seen such a
landscape before. I correct myself:
such an industrial landscape. This is a
modern mine, a man-made place
developed to support our quest for
sustainability. Lithium is that valuable
metal which powers our phones, lap-
tops and electric cars.
In short: it’s the technology metal of
the future and we are going to need
more of it. Lots more. In fact, market
analysts say global lithium demand
rose by almost 9% in 2019. Based on a
growing momentum, fivefold annual
grow is predicted by 2030.
I’ve not even taken into account the
latest products such as e-cigarettes: a
booming segment that just hit EUR 6
billion while simultaneously creating a
pesky new littering and disposal prob-
lem.
Meanwhile, soaring oil and gas prices

fuel installations of energy storage sys-
tems. GlobalData reports total
installed capacity reached 21GW last
year, led by China and the US. A recent
headline that comes to mind spoke of
a ‘battery bonanza’.
Let’s circle back to the Lithium Triangle
for a second. These brightly coloured
swimming pools are actually salt flats,
also known as salt deserts. They con-
tain minerals from underground lakes.
Different levels of salt create various
shades.
Miners drill holes in the sediment to
bring brine to the surface, after which
the water is evaporated. This leaves a
mixture of potassium, manganese,
borax and lithium salt that is carefully
filtered out. It’s an arduous process
that takes up to 18 months before suc-
cessful extraction.
Latin America has about half of the
Earth’s lithium reserves. Projects are
being developed in British Columbia to
explore mining potential closer to
home.
It’s been debated whether or not this
wet mining approach is truly sustain-
able. Granted, it caters to battery pro-
duction, boosting the uptake of the
world’s EV fleet and ‘clean energy’. On
the other hand, one could argue we’re
just switching one type of mining for
another.
It’s reasonable to ask what the impact
is on the quality of air, soil and water.
And how local workers are being com-

pensated. Biodiversity is another issue
as it’s been documented that Chile’s
flamingo population is at risk. It’s yet
unclear what the actual cost of produc-
ing ‘green’ batteries is.
What I do know is that we’ve got
awfully good at stripping the Earth of
its natural resources. Our eagerness to
make a profit (and our ambitions to
save the world) tends to block out
scepticism. I can’t help but wonder if
the expanding Lithium Triangle is
going to trigger a modern gold rush.
And will it make recycling lithium from
the products we own and ultimately
throw away a very, very last resort?
Take the vapes I mentioned earlier. In
the UK alone, up to 10 tonnes of lithi-
um hidden inside these devices is
dumped in landfills each year. It’s hard
to imagine all this valuable metal going
up in smoke.
I’ll leave you with my favourite eco-
friendly word: ‘urban mine’. Statista
researchers calculate approximately
345 000 tonnes of battery metals –
mostly manganese – are lying in wait in
Europe right now. About 17 000
tonnes of secondary lithium is ready to
be recycled. Serious numbers; serious
potential. What are we doing about
that?