Subscribe
44 In terms of actual flags, it’s worth not- ing that only 3% of the vessels decom- missioned in 2021 bore an EU flag, reveals data from Sea2Cradle. ‘This makes me very suspicious – it’s a clear sign of reflagging,’ says compa...
Read the entire page 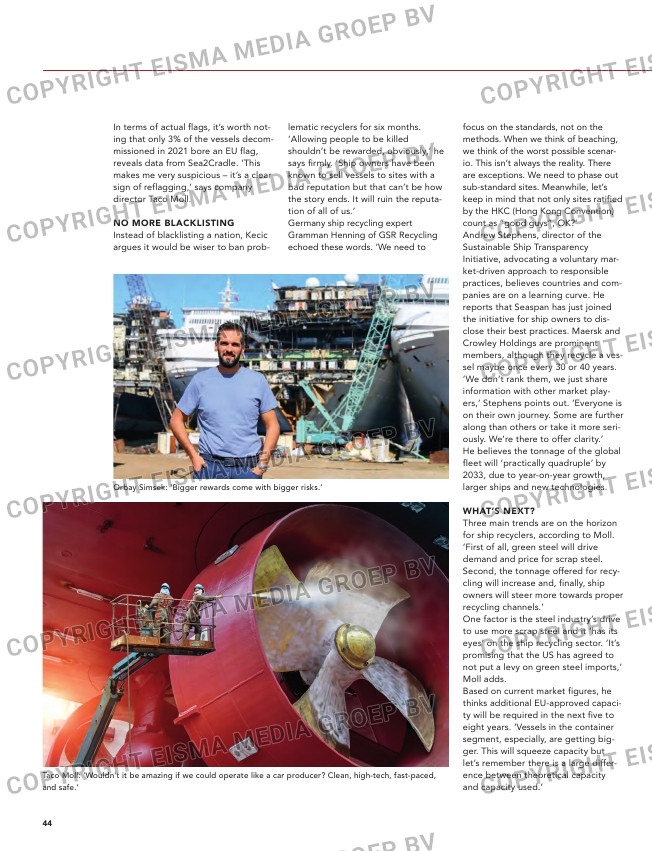 In terms of actual flags, it’s worth not-
ing that only 3% of the vessels decom-
missioned in 2021 bore an EU flag,
reveals data from Sea2Cradle. ‘This
makes me very suspicious – it’s a clear
sign of reflagging,’ says company
director Taco Moll.

NO MORE BLACKLISTING
Instead of blacklisting a nation, Kecic
argues it would be wiser to ban prob-

lematic recyclers for six months.
‘Allowing people to be killed
shouldn’t be rewarded, obviously,’ he
says firmly. ‘Ship owners have been
known to sell vessels to sites with a
bad reputation but that can’t be how
the story ends. It will ruin the reputa-
tion of all of us.’
Germany ship recycling expert
Gramman Henning of GSR Recycling
echoed these words. ‘We need to

Taco Moll: ‘Wouldn’t it be amazing if we could operate like a car producer? Clean, high-tech, fast-paced,
and safe.’

focus on the standards, not on the
methods. When we think of beaching,
we think of the worst possible scenar-
io. This isn’t always the reality. There
are exceptions. We need to phase out
sub-standard sites. Meanwhile, let’s
keep in mind that not only sites ratified
by the HKC (Hong Kong Convention)
count as “good guys”, OK?’
Andrew Stephens, director of the
Sustainable Ship Transparency
Initiative, advocating a voluntary mar-
ket-driven approach to responsible
practices, believes countries and com-
panies are on a learning curve. He
reports that Seaspan has just joined
the initiative for ship owners to dis-
close their best practices. Maersk and
Crowley Holdings are prominent
members, although they recycle a ves-
sel maybe once every 30 or 40 years.
‘We don’t rank them, we just share
information with other market play-
ers,’ Stephens points out. ‘Everyone is
on their own journey. Some are further
along than others or take it more seri-
ously. We’re there to offer clarity.’
He believes the tonnage of the global
fleet will ‘practically quadruple’ by
2033, due to year-on-year growth,
larger ships and new technologies.

WHAT’S NEXT?
Three main trends are on the horizon
for ship recyclers, according to Moll.
‘First of all, green steel will drive
demand and price for scrap steel.
Second, the tonnage offered for recy-
cling will increase and, finally, ship
owners will steer more towards proper
recycling channels.’
One factor is the steel industry’s drive
to use more scrap steel and it ‘has its
eyes’ on the ship recycling sector. ‘It’s
promising that the US has agreed to
not put a levy on green steel imports,’
Moll adds.
Based on current market figures, he
thinks additional EU-approved capaci-
ty will be required in the next five to
eight years. ‘Vessels in the container
segment, especially, are getting big-
ger. This will squeeze capacity but
let’s remember there is a large differ-
ence between theoretical capacity
and capacity used.’

Technology could make all this a lot
easier. As it stands, ship recycling still
thrives on manual labour and basic
tools such as blowtorches.
‘I’ve not yet encountered that many
shears,’ Moll points out. ‘What about
wire cutting or hydro cutting? There
are new and innovative ways to tackle
the available scrap being used suc-
cessfully in other parts of the recycling
industry.’ Adopting them would take
people out of harm’s way while greatly
boosting efficiency.
‘Ideally, I’d say we need to maximise
automation,’ Moll adds. More
advanced equipment could one day
lead to robotisation and realising this
would undoubtedly require high initial
investment. ‘Imagine the possibilities:
wouldn’t it be amazing if we could
operate like a car producer? Clean,
high-tech, fast-paced, and safe.’
One advantage of setting up opera-
tions up as ‘recycling factory’ is that
the overall recycling cost will go
down.

GROUNDHOG DAY
Certain buzzwords and catch phrases
have steadily resurfaced since I joined
Recycling International ten years ago.
A decade is a significant time, surely?
So why do we seem to be stuck in the
same place? I raised the issue during
the conference Q&A session.
My inquiry was met with nodding
heads, chuckles and sighs. It seems as
if I’m not the only one who’s noticed
Groundhog Day, The Recycling
Edition. ‘Expectations, meet humani-
ty,’ retorted moderator Slobodan
Kecic.
‘Let’s see a show of hands. Who wants
to spend the next hour telling the rest
of us all your company’s secrets? Not
just the best practices published on
your website or the reports cleared by
marketing. No, everything. Full trans-
parency?’
A nervous hush fell over the room.
Delegates shuffled in their seats, look-
ing around. ‘No one? The idea sounds
lovely, though. I guess we prefer to
keep our cards close to our chest,’
Kecic told me. ‘Protectionism is part
of the foundation of all industries,