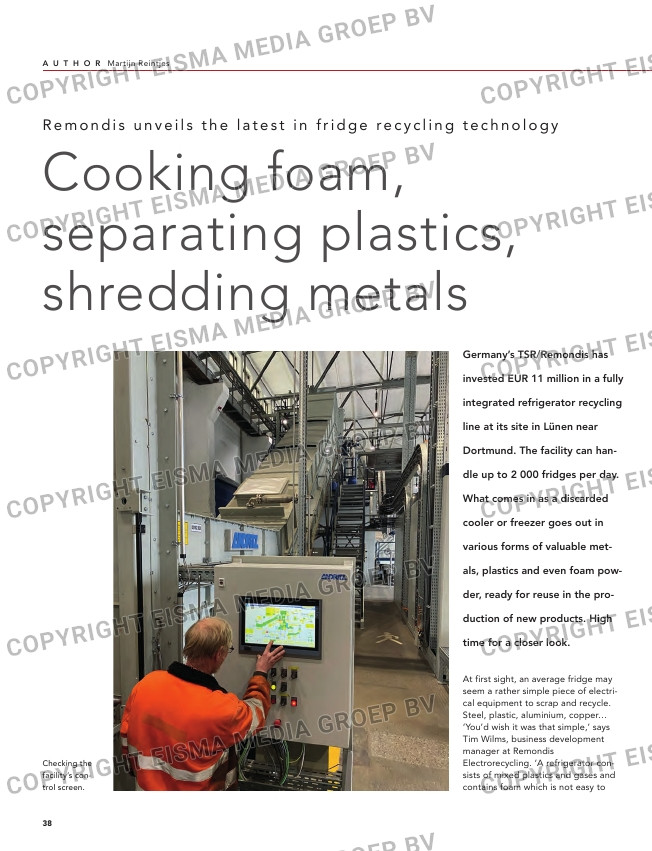 invested EUR 11 million in a fully

line at its site in Lünen near

Dortmund. The facility can han-

What comes in as a discarded

cooler or freezer goes out in

als, plastics and even foam pow-

der, ready for reuse in the pro-

time for a closer look.

process. Like most household appli-
ances, fridges are also becoming ever
more complex because they have
more and more electronics within
them. New-generation coolers even
feature gadgets like video screens so
recyclers will have to be prepared for
that.’

MAJOR INVESTMENT
Remondis, it seems, is prepared. The
company recently launched its latest
showpiece in recycling tech: a fully
integrated and automated, state-of-
the-art recycling line designed and
installed by Andritz. Total investment:
EUR 11 million. ‘This is top of the bill,’
proclaims Wilms during a tour of the
plant. ‘This is the smartest and most
sustainable fridge recycling you’ll find
today. No more waste, everything is
recycled; from the insulation materials
to the glass, from the mixed plastics
to the gases.’

1.6 MILLION TONNES
The new facility is at the heart of
Remondis Lippewerk in Lünen in the
west of Germany. A former aluminium
plant, Lippewerk has been trans-
formed into a major recycling hub
Remondis says is the largest industrial
recycling centre in Europe. The site
hosts facilities for e-scrap, chemicals
and plastics recycling, as well as bio-
gas production and reuse energy stor-
age from e-mobility batteries, to
name but a few.
On a yearly basis some 1.6 million
tonnes of scrap and waste is pro-
cessed of which 1 million tonnes

At first sight, an average fridge may
seem a rather simple piece of electri-
cal equipment to scrap and recycle.
Steel, plastic, aluminium, copper…
‘You’d wish it was that simple,’ says
Tim Wilms, business development
manager at Remondis
Electrorecycling. ‘A refrigerator con-
sists of mixed plastics and gases and
contains foam which is not easy to