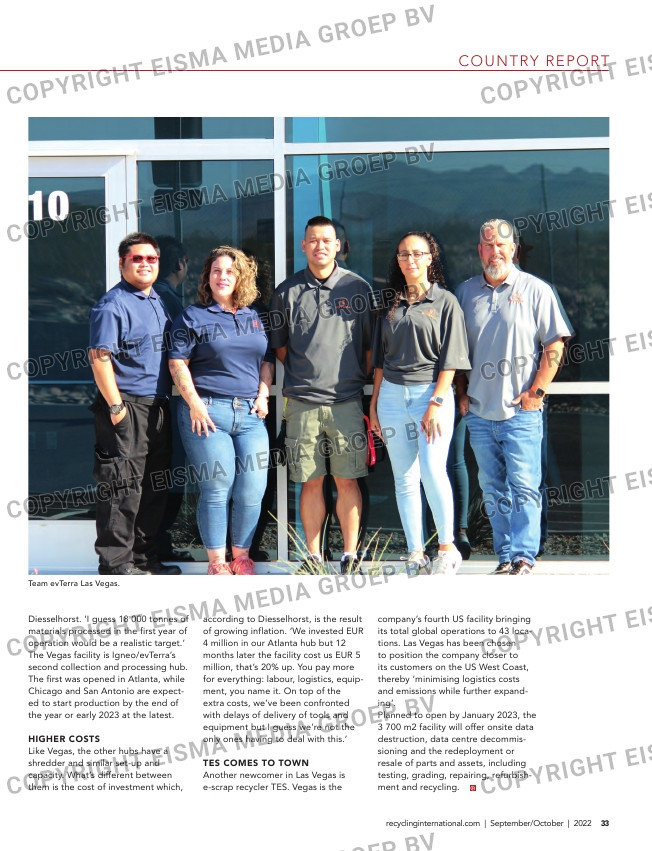 Diesselhorst. ‘I guess 18 000 tonnes of
materials processed in the first year of
operation would be a realistic target.’
The Vegas facility is Igneo/evTerra’s
second collection and processing hub.
The first was opened in Atlanta, while
Chicago and San Antonio are expect-
ed to start production by the end of
the year or early 2023 at the latest.

HIGHER COSTS
Like Vegas, the other hubs have a
shredder and similar set-up and
capacity. What’s different between
them is the cost of investment which,

according to Diesselhorst, is the result
of growing inflation. ‘We invested EUR
4 million in our Atlanta hub but 12
months later the facility cost us EUR 5
million, that’s 20% up. You pay more
for everything: labour, logistics, equip-
ment, you name it. On top of the
extra costs, we’ve been confronted
with delays of delivery of tools and
equipment but I guess we’re not the
only ones having to deal with this.’

TES COMES TO TOWN
Another newcomer in Las Vegas is
e-scrap recycler TES. Vegas is the

company’s fourth US facility bringing
its total global operations to 43 loca-
tions. Las Vegas has been chosen
to position the company closer to
its customers on the US West Coast,
thereby ‘minimising logistics costs
and emissions while further expand-
ing’.
Planned to open by January 2023, the
3 700 m2 facility will offer onsite data
destruction, data centre decommis-
sioning and the redeployment or
resale of parts and assets, including
testing, grading, repairing, refurbish-
ment and recycling.