Subscribe
32 SETBACK IN PHOENIX An electronics recycling project underway some 450 km south-east of Las Vegas, in Phoenix Arizona, is a state-of-the-art plant for the recovery and refining of precious metals. Designed and built by India’s Venka...
Read the entire page 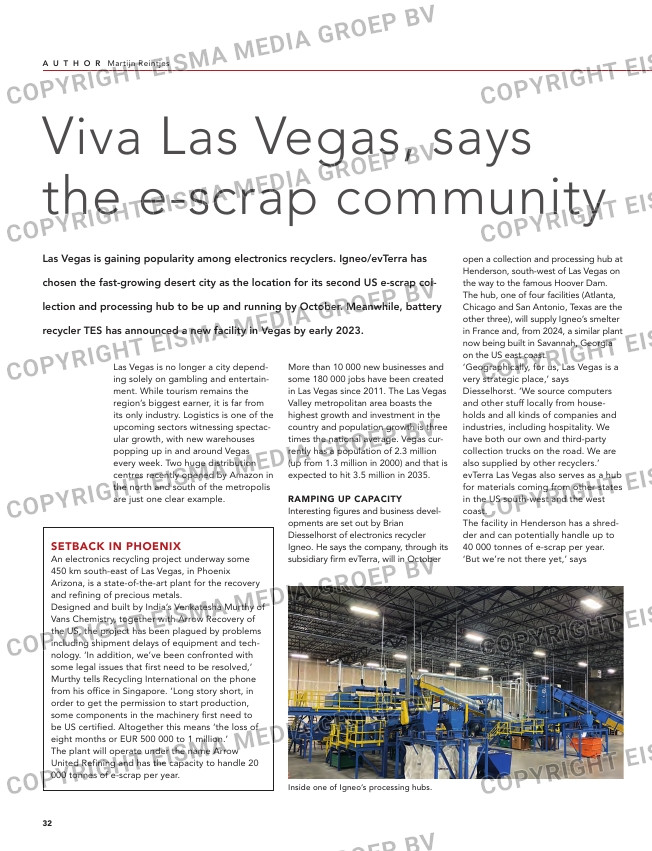 SETBACK IN PHOENIX
An electronics recycling project underway some
450 km south-east of Las Vegas, in Phoenix
Arizona, is a state-of-the-art plant for the recovery
and refining of precious metals.
Designed and built by India’s Venkatesha Murthy of
Vans Chemistry, together with Arrow Recovery of
the US, the project has been plagued by problems
including shipment delays of equipment and tech-
nology. ‘In addition, we’ve been confronted with
some legal issues that first need to be resolved,’
Murthy tells Recycling International on the phone
from his office in Singapore. ‘Long story short, in
order to get the permission to start production,
some components in the machinery first need to
be US certified. Altogether this means ‘the loss of
eight months or EUR 500 000 to 1 million.’
The plant will operate under the name Arrow
United Refining and has the capacity to handle 20
000 tonnes of e-scrap per year.

Inside one of Igneo’s processing hubs.

lection and processing hub to be up and running by October. Meanwhile, battery

recycler TES has announced a new facility in Vegas by early 2023.

Diesselhorst. ‘I guess 18 000 tonnes of
materials processed in the first year of
operation would be a realistic target.’
The Vegas facility is Igneo/evTerra’s
second collection and processing hub.
The first was opened in Atlanta, while
Chicago and San Antonio are expect-
ed to start production by the end of
the year or early 2023 at the latest.

HIGHER COSTS
Like Vegas, the other hubs have a
shredder and similar set-up and
capacity. What’s different between
them is the cost of investment which,

Las Vegas is no longer a city depend-
ing solely on gambling and entertain-
ment. While tourism remains the
region’s biggest earner, it is far from
its only industry. Logistics is one of the
upcoming sectors witnessing spectac-
ular growth, with new warehouses
popping up in and around Vegas
every week. Two huge distribution
centres recently opened by Amazon in
the north and south of the metropolis
are just one clear example.

More than 10 000 new businesses and
some 180 000 jobs have been created
in Las Vegas since 2011. The Las Vegas
Valley metropolitan area boasts the
highest growth and investment in the
country and population growth is three
times the national average. Vegas cur-
rently has a population of 2.3 million
(up from 1.3 million in 2000) and that is
expected to hit 3.5 million in 2035.

RAMPING UP CAPACITY
Interesting figures and business devel-
opments are set out by Brian
Diesselhorst of electronics recycler
Igneo. He says the company, through its
subsidiary firm evTerra, will in October

open a collection and processing hub at
Henderson, south-west of Las Vegas on
the way to the famous Hoover Dam.
The hub, one of four facilities (Atlanta,
Chicago and San Antonio, Texas are the
other three), will supply Igneo’s smelter
in France and, from 2024, a similar plant
now being built in Savannah, Georgia
on the US east coast.
‘Geographically, for us, Las Vegas is a
very strategic place,’ says
Diesselhorst. ‘We source computers
and other stuff locally from house-
holds and all kinds of companies and
industries, including hospitality. We
have both our own and third-party
collection trucks on the road. We are
also supplied by other recyclers.’
evTerra Las Vegas also serves as a hub
for materials coming from other states
in the US south-west and the west
coast.
The facility in Henderson has a shred-
der and can potentially handle up to
40 000 tonnes of e-scrap per year.
‘But we’re not there yet,’ says