Subscribe
COUNTRY REPORT 29recyclinginternational.com | September/October | 2022 craft every day and doing business with people and airline companies from all over the world.’ Before the pandemic, Ascent’s main business was providing m...
Read the entire page 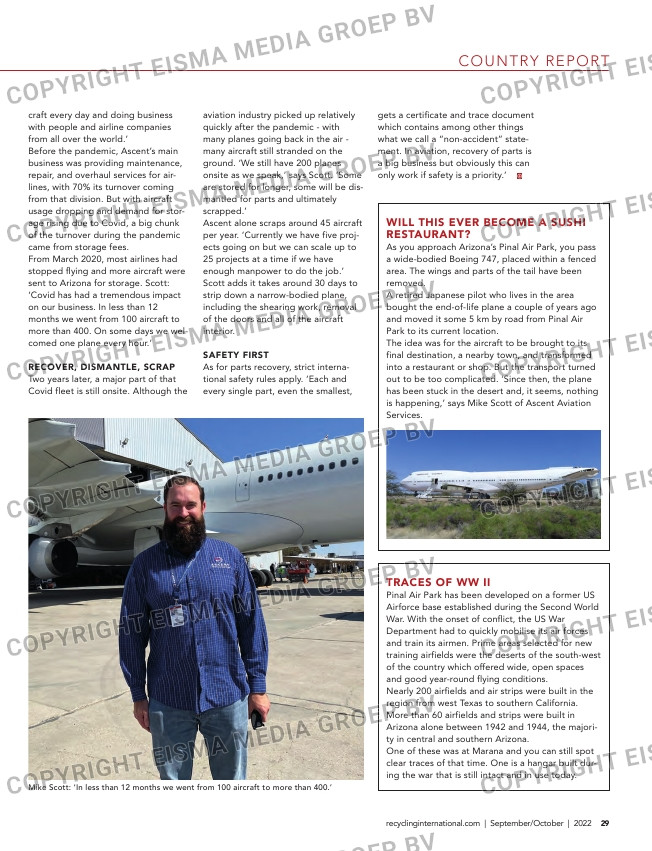 craft every day and doing business
with people and airline companies
from all over the world.’
Before the pandemic, Ascent’s main
business was providing maintenance,
repair, and overhaul services for air-
lines, with 70% its turnover coming
from that division. But with aircraft
usage dropping and demand for stor-
age rising due to Covid, a big chunk
of the turnover during the pandemic
came from storage fees.
From March 2020, most airlines had
stopped flying and more aircraft were
sent to Arizona for storage. Scott:
‘Covid has had a tremendous impact
on our business. In less than 12
months we went from 100 aircraft to
more than 400. On some days we wel-
comed one plane every hour.’

RECOVER, DISMANTLE, SCRAP
Two years later, a major part of that
Covid fleet is still onsite. Although the

aviation industry picked up relatively
quickly after the pandemic – with
many planes going back in the air –
many aircraft still stranded on the
ground. ‘We still have 200 planes
onsite as we speak,’ says Scott. ‘Some
are stored for longer, some will be dis-
mantled for parts and ultimately
scrapped.’
Ascent alone scraps around 45 aircraft
per year. ‘Currently we have five proj-
ects going on but we can scale up to
25 projects at a time if we have
enough manpower to do the job.’
Scott adds it takes around 30 days to
strip down a narrow-bodied plane,
including the shearing work, removal
of the doors and all of the aircraft
interior.

SAFETY FIRST
As for parts recovery, strict interna-
tional safety rules apply. ‘Each and
every single part, even the smallest,

gets a certificate and trace document
which contains among other things
what we call a “non-accident” state-
ment. In aviation, recovery of parts is
a big business but obviously this can
only work if safety is a priority.’

TRACES OF WW II
Pinal Air Park has been developed on a former US
Airforce base established during the Second World
War. With the onset of conflict, the US War
Department had to quickly mobilise its air forces
and train its airmen. Prime areas selected for new
training airfields were the deserts of the south-west
of the country which offered wide, open spaces
and good year-round flying conditions.
Nearly 200 airfields and air strips were built in the
region from west Texas to southern California.
More than 60 airfields and strips were built in
Arizona alone between 1942 and 1944, the majori-
ty in central and southern Arizona.
One of these was at Marana and you can still spot
clear traces of that time. One is a hangar built dur-
ing the war that is still intact and in use today.

WILL THIS EVER BECOME A SUSHI
RESTAURANT?
As you approach Arizona’s Pinal Air Park, you pass
a wide-bodied Boeing 747, placed within a fenced
area. The wings and parts of the tail have been
removed.
A retired Japanese pilot who lives in the area
bought the end-of-life plane a couple of years ago
and moved it some 5 km by road from Pinal Air
Park to its current location.
The idea was for the aircraft to be brought to its
final destination, a nearby town, and transformed
into a restaurant or shop. But the transport turned
out to be too complicated. ‘Since then, the plane
has been stuck in the desert and, it seems, nothing
is happening,’ says Mike Scott of Ascent Aviation
Services.