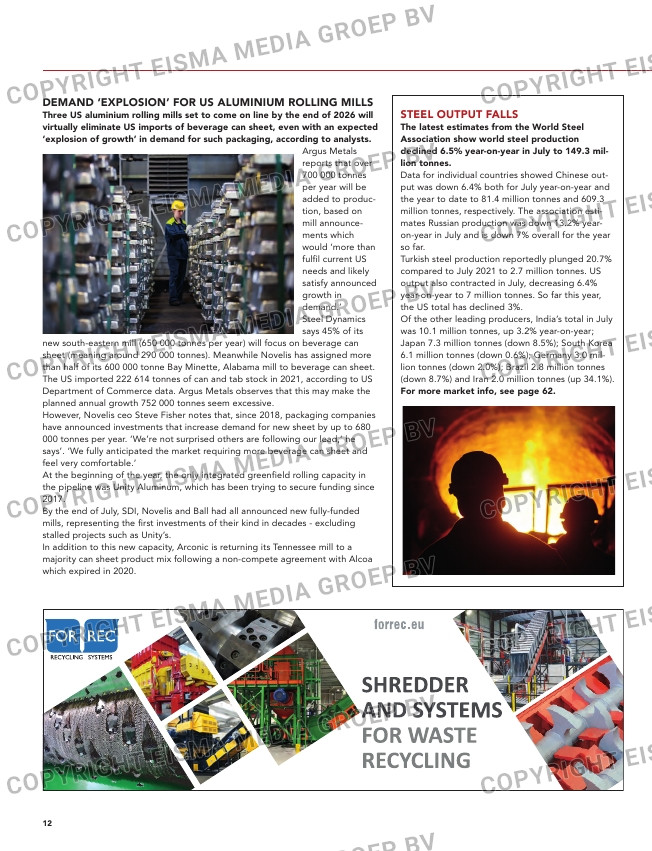 DEMAND ‘EXPLOSION’ FOR US ALUMINIUM ROLLING MILLS
Three US aluminium rolling mills set to come on line by the end of 2026 will
virtually eliminate US imports of beverage can sheet, even with an expected
‘explosion of growth’ in demand for such packaging, according to analysts.

Argus Metals
reports that over
700 000 tonnes
per year will be
added to produc-
tion, based on
mill announce-
ments which
would ‘more than
fulfil current US
needs and likely
satisfy announced
growth in
demand.’
Steel Dynamics
says 45% of its

new south-eastern mill (650 000 tonnes per year) will focus on beverage can
sheet (meaning around 290 000 tonnes). Meanwhile Novelis has assigned more
than half of its 600 000 tonne Bay Minette, Alabama mill to beverage can sheet.
The US imported 222 614 tonnes of can and tab stock in 2021, according to US
Department of Commerce data. Argus Metals observes that this may make the
planned annual growth 752 000 tonnes seem excessive.
However, Novelis ceo Steve Fisher notes that, since 2018, packaging companies
have announced investments that increase demand for new sheet by up to 680
000 tonnes per year. ‘We’re not surprised others are following our lead,’ he
says’. ‘We fully anticipated the market requiring more beverage can sheet and
feel very comfortable.’
At the beginning of the year, the only integrated greenfield rolling capacity in
the pipeline was Unity Aluminum, which has been trying to secure funding since
2017.
By the end of July, SDI, Novelis and Ball had all announced new fully-funded
mills, representing the first investments of their kind in decades – excluding
stalled projects such as Unity’s.
In addition to this new capacity, Arconic is returning its Tennessee mill to a
majority can sheet product mix following a non-compete agreement with Alcoa
which expired in 2020.

WAR AND COVID BLIGHT PLASTICS MARKET
Bottlenecks in international supply chains because of the war in
Ukraine and China’s zero-Covid policy continue to dog the glob-
al trade in plastic scrap.
The message that ‘growth in global trade is under pressure and
2022 is still a poisoned chalice’ comes from BIR in its latest quarter-
ly Mirror on the plastics market. Division chairman Henk Alssema
says these uncertainties are putting pressure on the prices of recy-
cled raw materials in Europe.
‘Whereas prices achieved record highs last year, we are now looking
at substantial price drops, with polypropylene being hit hardest,’ he
writes. ‘Supply of PP waste has risen over the past month, in sharp
contrast with the previous period when recyclers had to accept any
price increase to obtain any material at all for their production
operations.’
Alssema notes that prices for LDPE are stable with ‘satisfactory’
demand whereas HDPE is under pressure, albeit to a lesser extent
than PP. HIPS and ABS are not affected and prices for these materi-
als are still fairly level. ‘Despite recent price drops, plastics recyclers
can look back on an extremely good first six months of the year,’ he
says.
‘Nearly everyone is taking account of the fact that the market will
cool off during the last six months of 2022, and the first signs of this
cooling are starting to emerge. End-processors are cautious about
ordering raw materials and are using up old stock rather than creat-
ing any more inventory. At the same time, manufacturers are sus-
pending weekend production as a result of disappointing order lev-
els.’
For his part, fellow board member Max Craipeau of Greencore
Resources in China, says ‘the party seems to be over’ for polymers
after over 12 months of continuous price increases. He makes an
exception of rPET which continues to be supported by minimum
recycled content mandates and brand owners’ commitments in
Europe as well as in Asia.
‘Last year’s price rally and more legislation in favour of recycled
content have led to massive investments in recycling capacity across
the globe. However, we are reaching the point where recycling
capacity exceeds the volumes of waste feedstock being collected.’