Subscribe
TRENDS & UPDATES 11recyclinginternational.com | September/October | 2022 Fotobijschrift ENTREPRENEUR WANTS TO PUT CANADA’S OLD FLEET TO REST Canada has around 60 ‘ships of concern’ waiting to be scrapped. ‘The problem is t...
Read the entire page 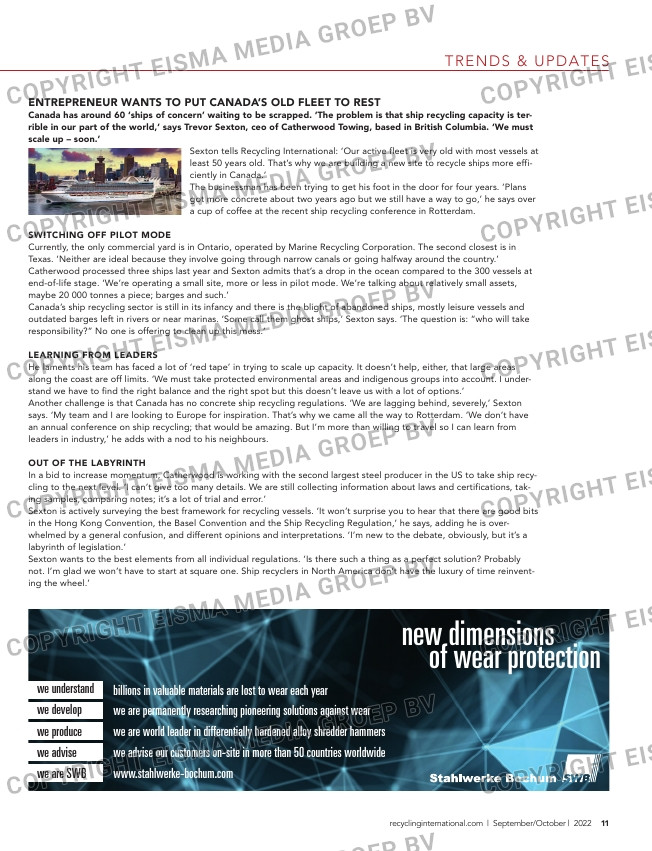 ENTREPRENEUR WANTS TO PUT CANADA’S OLD FLEET TO REST
Canada has around 60 ‘ships of concern’ waiting to be scrapped. ‘The problem is that ship recycling capacity is ter-
rible in our part of the world,’ says Trevor Sexton, ceo of Catherwood Towing, based in British Columbia. ‘We must
scale up – soon.’

Sexton tells Recycling International: ‘Our active fleet is very old with most vessels at
least 50 years old. That’s why we are building a new site to recycle ships more effi-
ciently in Canada.’
The businessman has been trying to get his foot in the door for four years. ‘Plans
got more concrete about two years ago but we still have a way to go,’ he says over
a cup of coffee at the recent ship recycling conference in Rotterdam.

SWITCHING OFF PILOT MODE
Currently, the only commercial yard is in Ontario, operated by Marine Recycling Corporation. The second closest is in
Texas. ‘Neither are ideal because they involve going through narrow canals or going halfway around the country.’
Catherwood processed three ships last year and Sexton admits that’s a drop in the ocean compared to the 300 vessels at
end-of-life stage. ‘We’re operating a small site, more or less in pilot mode. We’re talking about relatively small assets,
maybe 20 000 tonnes a piece; barges and such.’
Canada’s ship recycling sector is still in its infancy and there is the blight of abandoned ships, mostly leisure vessels and
outdated barges left in rivers or near marinas. ‘Some call them ghost ships,’ Sexton says. ‘The question is: “who will take
responsibility?” No one is offering to clean up this mess.’

LEARNING FROM LEADERS
He laments his team has faced a lot of ‘red tape’ in trying to scale up capacity. It doesn’t help, either, that large areas
along the coast are off limits. ‘We must take protected environmental areas and indigenous groups into account. I under-
stand we have to find the right balance and the right spot but this doesn’t leave us with a lot of options.’
Another challenge is that Canada has no concrete ship recycling regulations. ‘We are lagging behind, severely,’ Sexton
says. ‘My team and I are looking to Europe for inspiration. That’s why we came all the way to Rotterdam. ‘We don’t have
an annual conference on ship recycling; that would be amazing. But I’m more than willing to travel so I can learn from
leaders in industry,’ he adds with a nod to his neighbours.

OUT OF THE LABYRINTH
In a bid to increase momentum, Catherwood is working with the second largest steel producer in the US to take ship recy-
cling to the next level. ‘I can’t give too many details. We are still collecting information about laws and certifications, tak-
ing samples, comparing notes; it’s a lot of trial and error.’
Sexton is actively surveying the best framework for recycling vessels. ‘It won’t surprise you to hear that there are good bits
in the Hong Kong Convention, the Basel Convention and the Ship Recycling Regulation,’ he says, adding he is over-
whelmed by a general confusion, and different opinions and interpretations. ‘I’m new to the debate, obviously, but it’s a
labyrinth of legislation.’
Sexton wants to the best elements from all individual regulations. ‘Is there such a thing as a perfect solution? Probably
not. I’m glad we won’t have to start at square one. Ship recyclers in North America don’t have the luxury of time reinvent-
ing the wheel.’

ment in Nova Pangaea Technologies,
which develops a process to convert
non-food biomass into liquid fuels and
a range of useful chemicals, and Bio-
Bean led by Turquoise, through its
Low Carbon Innovation Fund II. Bio-
Bean manufactures a range of biofuels
and bio-chemicals from recycled spent
coffee grounds.
An example of products with circular
input is the Scottish National
Investment Bank support for
IndiNature, a provider of natural fibre
construction insulation products.
‘Despite the concentration of invest-
ment towards the supply side, there
were still a number of notable invest-
ments made into manufacturing circu-
lar products with functionality
designed to positively contribute
towards a CE,’ the report adds. ‘The
most interesting of these investments
are technology led, like Circularity
Capital’s investment into P2i, whose
liquid repellent nanotechnology
increases the life span of electronic
devices by enabling them to survive
liquid exposure from everyday acci-
dents and conditions.’
Todd Mills, BDO assistant director,
says: ‘There is growing recognition
from investors that CE principles can
deliver both environmental and eco-
nomic benefits. With levels of avail-
able private equity capital in the UK at
an all-time high, more and more inves-
tors are turning to the CE and we
expect 2022 to be another record
year.’