Subscribe
TRENDS & UPDATES 9recyclinginternational.com | November/December | 2019 IndonesIa accused of dIvertIng rejected contaIners Activists are claiming that officials in Indonesia have re-directed illegal waste consignments from the U...
Read the entire page 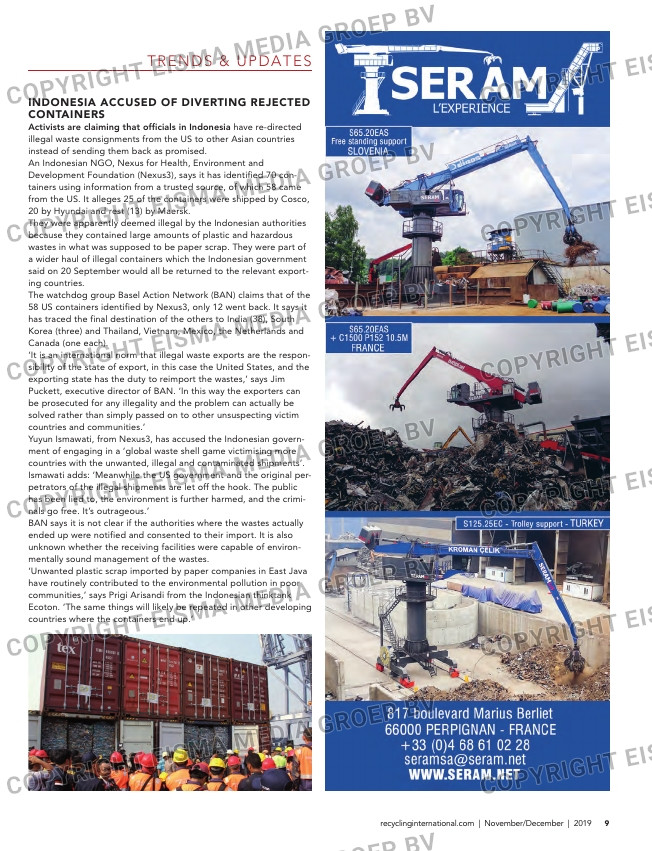 IndonesIa accused of dIvertIng rejected
contaIners
Activists are claiming that officials in Indonesia have re-directed
illegal waste consignments from the US to other Asian countries
instead of sending them back as promised.
An Indonesian NGO, Nexus for Health, Environment and
Development Foundation (Nexus3), says it has identified 70 con-
tainers using information from a trusted source, of which 58 came
from the US. It alleges 25 of the containers were shipped by Cosco,
20 by Hyundai and rest (13) by Maersk.
They were apparently deemed illegal by the Indonesian authorities
because they contained large amounts of plastic and hazardous
wastes in what was supposed to be paper scrap. They were part of
a wider haul of illegal containers which the Indonesian government
said on 20 September would all be returned to the relevant export-
ing countries.
The watchdog group Basel Action Network (BAN) claims that of the
58 US containers identified by Nexus3, only 12 went back. It says it
has traced the final destination of the others to India (38), South
Korea (three) and Thailand, Vietnam, Mexico, the Netherlands and
Canada (one each).
‘It is an international norm that illegal waste exports are the respon-
sibility of the state of export, in this case the United States, and the
exporting state has the duty to reimport the wastes,’ says Jim
Puckett, executive director of BAN. ‘In this way the exporters can
be prosecuted for any illegality and the problem can actually be
solved rather than simply passed on to other unsuspecting victim
countries and communities.’
Yuyun Ismawati, from Nexus3, has accused the Indonesian govern-
ment of engaging in a ‘global waste shell game victimising more
countries with the unwanted, illegal and contaminated shipments’.
Ismawati adds: ‘Meanwhile the US government and the original per-
petrators of the illegal shipments are let off the hook. The public
has been lied to, the environment is further harmed, and the crimi-
nals go free. It’s outrageous.’
BAN says it is not clear if the authorities where the wastes actually
ended up were notified and consented to their import. It is also
unknown whether the receiving facilities were capable of environ-
mentally sound management of the wastes.
‘Unwanted plastic scrap imported by paper companies in East Java
have routinely contributed to the environmental pollution in poor
communities,’ says Prigi Arisandi from the Indonesian thinktank
Ecoton. ‘The same things will likely be repeated in other developing
countries where the containers end up.’