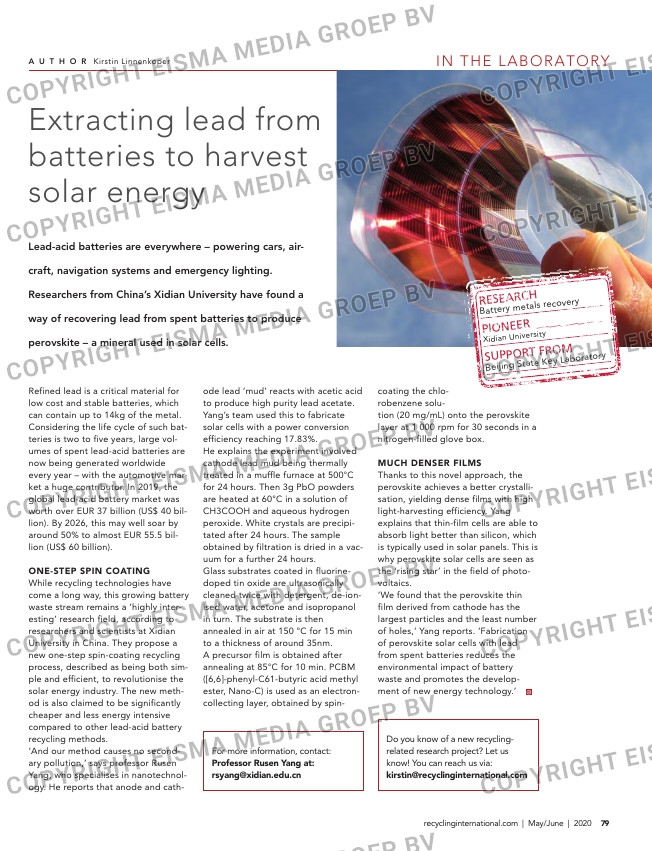 Researchers from China’s Xidian University have found a

way of recovering lead from spent batteries to produce

Refined lead is a critical material for
low cost and stable batteries, which
can contain up to 14kg of the metal.
Considering the life cycle of such bat-
teries is two to five years, large vol-
umes of spent lead-acid batteries are
now being generated worldwide
every year – with the automotive mar-
ket a huge contributor. In 2019, the
global lead-acid battery market was
worth over EUR 37 billion (US$ 40 bil-
lion). By 2026, this may well soar by
around 50% to almost EUR 55.5 bil-
lion (US$ 60 billion).

One-step spin cOating
While recycling technologies have
come a long way, this growing battery
waste stream remains a ‘highly inter-
esting’ research field, according to
researchers and scientists at Xidian
University in China. They propose a
new one-step spin-coating recycling
process, described as being both sim-
ple and efficient, to revolutionise the
solar energy industry. The new meth-
od is also claimed to be significantly
cheaper and less energy intensive
compared to other lead-acid battery
recycling methods.
‘And our method causes no second-
ary pollution,’ says professor Rusen
Yang, who specialises in nanotechnol-
ogy. He reports that anode and cath-

ode lead ‘mud’ reacts with acetic acid
to produce high purity lead acetate.
Yang’s team used this to fabricate
solar cells with a power conversion
efficiency reaching 17.83%.
He explains the experiment involved
cathode lead mud being thermally
treated in a muffle furnace at 500°C
for 24 hours. Then 3g PbO powders
are heated at 60°C in a solution of
CH3COOH and aqueous hydrogen
peroxide. White crystals are precipi-
tated after 24 hours. The sample
obtained by filtration is dried in a vac-
uum for a further 24 hours.
Glass substrates coated in fluorine-
doped tin oxide are ultrasonically
cleaned twice with detergent, de-ion-
ised water, acetone and isopropanol
in turn. The substrate is then
annealed in air at 150 °C for 15 min
to a thickness of around 35nm.
A precursor film is obtained after
annealing at 85°C for 10 min. PCBM
([6,6]-phenyl-C61-butyric acid methyl
ester, Nano-C) is used as an electron-
collecting layer, obtained by spin-

coating the chlo-
robenzene solu-
tion (20 mg/mL) onto the perovskite
layer at 1 000 rpm for 30 seconds in a
nitrogen-filled glove box.

Much denser filMs
Thanks to this novel approach, the
perovskite achieves a better crystalli-
sation, yielding dense films with high
light-harvesting efficiency. Yang
explains that thin-film cells are able to
absorb light better than silicon, which
is typically used in solar panels. This is
why perovskite solar cells are seen as
the ‘rising star’ in the field of photo-
voltaics.
‘We found that the perovskite thin
film derived from cathode has the
largest particles and the least number
of holes,’ Yang reports. ‘Fabrication
of perovskite solar cells with lead
from spent batteries reduces the
environmental impact of battery
waste and promotes the develop-
ment of new energy technology.’

Do you know of a new recycling-
related research project? Let us
know! You can reach us via:
[email protected]