Subscribe
78 PLASTICSMARKET ANALYSIS Slump and low oil prices batter sector Economic impact of coronavirus worldwide strangles demand for scrap with few signs of a respite. March 2020 was the month where people throughout the world, for the ...
Read the entire page 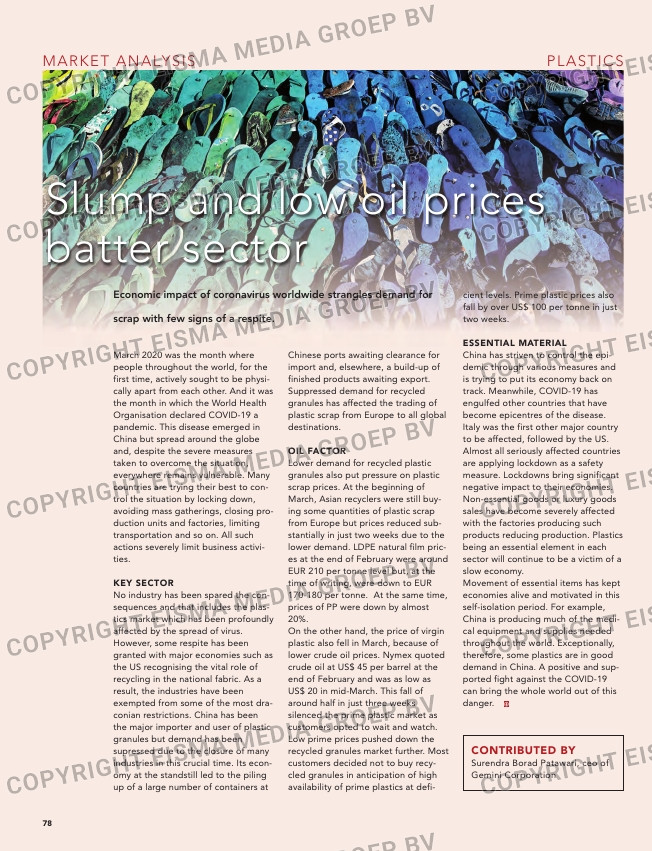 scrap with few signs of a respite.

March 2020 was the month where
people throughout the world, for the
first time, actively sought to be physi-
cally apart from each other. And it was
the month in which the World Health
Organisation declared COVID-19 a
pandemic. This disease emerged in
China but spread around the globe
and, despite the severe measures
taken to overcome the situation,
everywhere remains vulnerable. Many
countries are trying their best to con-
trol the situation by locking down,
avoiding mass gatherings, closing pro-
duction units and factories, limiting
transportation and so on. All such
actions severely limit business activi-
ties.

KEY SECTOR
No industry has been spared the con-
sequences and that includes the plas-
tics market which has been profoundly
affected by the spread of virus.
However, some respite has been
granted with major economies such as
the US recognising the vital role of
recycling in the national fabric. As a
result, the industries have been
exempted from some of the most dra-
conian restrictions. China has been
the major importer and user of plastic
granules but demand has been
supressed due to the closure of many
industries in this crucial time. Its econ-
omy at the standstill led to the piling
up of a large number of containers at

Chinese ports awaiting clearance for
import and, elsewhere, a build-up of
finished products awaiting export.
Suppressed demand for recycled
granules has affected the trading of
plastic scrap from Europe to all global
destinations.

OIL FACTOR
Lower demand for recycled plastic
granules also put pressure on plastic
scrap prices. At the beginning of
March, Asian recyclers were still buy-
ing some quantities of plastic scrap
from Europe but prices reduced sub-
stantially in just two weeks due to the
lower demand. LDPE natural film pric-
es at the end of February were around
EUR 210 per tonne level but, at the
time of writing, were down to EUR
170-180 per tonne. At the same time,
prices of PP were down by almost
20%.
On the other hand, the price of virgin
plastic also fell in March, because of
lower crude oil prices. Nymex quoted
crude oil at US$ 45 per barrel at the
end of February and was as low as
US$ 20 in mid-March. This fall of
around half in just three weeks
silenced the prime plastic market as
customers opted to wait and watch.
Low prime prices pushed down the
recycled granules market further. Most
customers decided not to buy recy-
cled granules in anticipation of high
availability of prime plastics at defi-

cient levels. Prime plastic prices also
fall by over US$ 100 per tonne in just
two weeks.

ESSENTIAL MATERIAL
China has striven to control the epi-
demic through various measures and
is trying to put its economy back on
track. Meanwhile, COVID-19 has
engulfed other countries that have
become epicentres of the disease.
Italy was the first other major country
to be affected, followed by the US.
Almost all seriously affected countries
are applying lockdown as a safety
measure. Lockdowns bring significant
negative impact to their economies.
Non-essential goods or luxury goods
sales have become severely affected
with the factories producing such
products reducing production. Plastics
being an essential element in each
sector will continue to be a victim of a
slow economy.
Movement of essential items has kept
economies alive and motivated in this
self-isolation period. For example,
China is producing much of the medi-
cal equipment and supplies needed
throughout the world. Exceptionally,
therefore, some plastics are in good
demand in China. A positive and sup-
ported fight against the COVID-19
can bring the whole world out of this
danger.