Subscribe
market analysis adjusting to the ‘new normal’ Shutdowns in many countries and people stay- ing at home are changing the business of scrap paper. 2020 had got off to a promising start: demand was good even though prices were lo...
Read the entire page 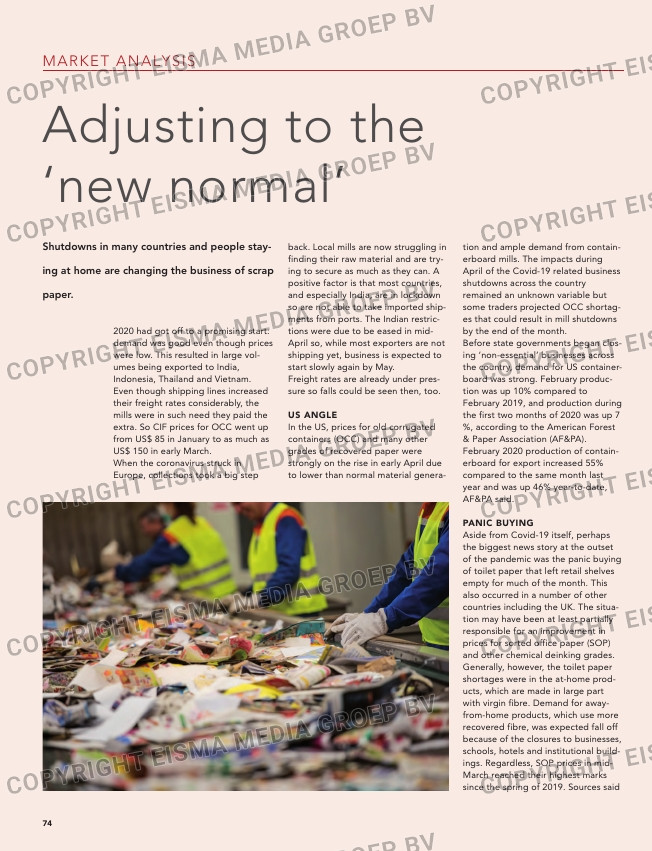 ing at home are changing the business of scrap

2020 had got off to a promising start:
demand was good even though prices
were low. This resulted in large vol-
umes being exported to India,
Indonesia, Thailand and Vietnam.
Even though shipping lines increased
their freight rates considerably, the
mills were in such need they paid the
extra. So CIF prices for OCC went up
from US$ 85 in January to as much as
US$ 150 in early March.
When the coronavirus struck in
Europe, collections took a big step

tion and ample demand from contain-
erboard mills. The impacts during
April of the Covid-19 related business
shutdowns across the country
remained an unknown variable but
some traders projected OCC shortag-
es that could result in mill shutdowns
by the end of the month.
Before state governments began clos-
ing ‘non-essential’ businesses across
the country, demand for US container-
board was strong. February produc-
tion was up 10% compared to
February 2019, and production during
the first two months of 2020 was up 7
%, according to the American Forest
& Paper Association (AF&PA).
February 2020 production of contain-
erboard for export increased 55%
compared to the same month last
year and was up 46% year-to-date,
AF&PA said.

PANIC BUYING
Aside from Covid-19 itself, perhaps
the biggest news story at the outset
of the pandemic was the panic buying
of toilet paper that left retail shelves
empty for much of the month. This
also occurred in a number of other
countries including the UK. The situa-
tion may have been at least partially
responsible for an improvement in
prices for sorted office paper (SOP)
and other chemical deinking grades.
Generally, however, the toilet paper
shortages were in the at-home prod-
ucts, which are made in large part
with virgin fibre. Demand for away-
from-home products, which use more
recovered fibre, was expected fall off
because of the closures to businesses,
schools, hotels and institutional build-
ings. Regardless, SOP prices in mid-
March reached their highest marks
since the spring of 2019. Sources said

back. Local mills are now struggling in
finding their raw material and are try-
ing to secure as much as they can. A
positive factor is that most countries,
and especially India, are in lockdown
so are not able to take imported ship-
ments from ports. The Indian restric-
tions were due to be eased in mid-
April so, while most exporters are not
shipping yet, business is expected to
start slowly again by May.
Freight rates are already under pres-
sure so falls could be seen then, too.

US ANGLE
In the US, prices for old corrugated
containers (OCC) and many other
grades of recovered paper were
strongly on the rise in early April due
to lower than normal material genera-

prices continued to strengthen at the
beginning of April.
With the full impact of Covid-19 shut-
downs still being measured, traders
said containerboard mills contained to
run strong. Retail generation of OCC
realised a temporary boost in early
March, as panicked shoppers flooded
to the stores. However, retail supply,
along with generation from closed
industrial and commercial businesses,
dwindled by the end of the month.

CHANGING COLLECTIONS
Residential generation of fibre was
expected to increase with large num-
bers of residents ordered to stay at
home. However, as one recycler
noted, the largest increase in residen-
tial paper collections is likely to be
paperboard packages, such as cereal
boxes, as opposed to corrugated con-
tainers. Meanwhile, some recycling
programmes were being suspended,
pushing more material into landfill.
Waste Management, the county’s larg-
est waste hauler and collector of recy-
clable, closed its recycling operations
in California, although processing cen-
tres remained open in the rest of the
country, the company said. Typically,
said a recovered paper broker on the
West Coast, ‘March is a really good
rebound month from February, which is
always the worst month for generation.
But it’s not rebounding this month and
it’s going to get worse now that all
these shutdowns are happening.’

US PRICES
After sinking beneath US$ 40 per
tonne during most of 2029, the aver-
age national mill buying price of OCC
climbed above US$ 80 per tonne,
FOB, seller’s dock, according to sur-
veys from The Paper Stock Report,
and actual sales were reported as high
as US$ 120 per tonne in some areas of
the country. Some suppliers at the
beginning of April said the shortage
of OCC was bringing some life to sub-
stitute grades like mixed paper.
However, some sources noted, con-
tainerboard mills may have the option
of running pulp as an alternative to
OCC. On the other hand, sources
speculated that International Paper,