Subscribe
In the Laboratory 67recyclinginternational.com | September/October | 2020 tapping into the unknown recycling powers of oranges A group of researchers and scientists in Singapore has dis- covered that orange peel can be used to extr...
Read the entire page 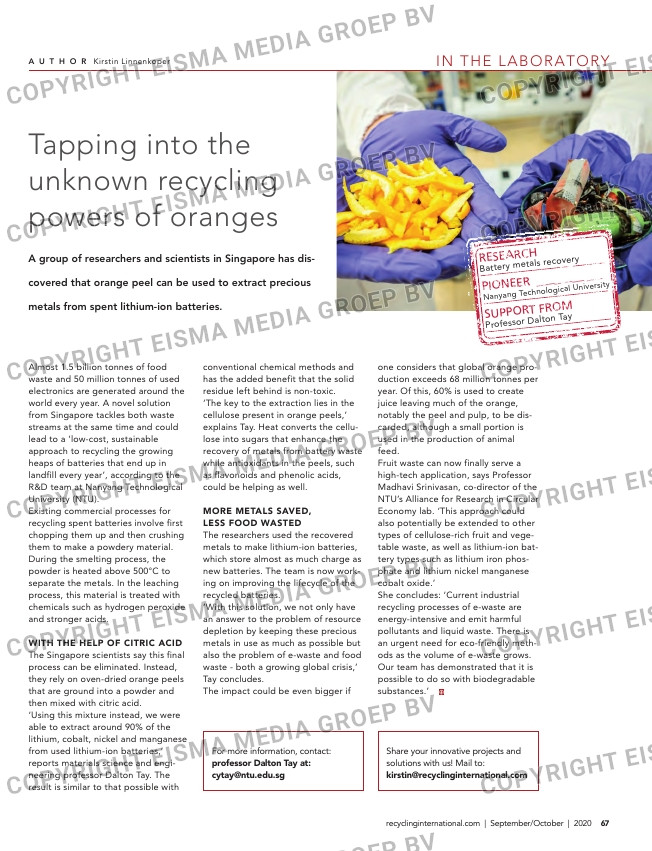 covered that orange peel can be used to extract precious

Almost 1.5 billion tonnes of food
waste and 50 million tonnes of used
electronics are generated around the
world every year. A novel solution
from Singapore tackles both waste
streams at the same time and could
lead to a ‘low-cost, sustainable
approach to recycling the growing
heaps of batteries that end up in
landfill every year’, according to the
R&D team at Nanyang Technological
University (NTU).
Existing commercial processes for
recycling spent batteries involve first
chopping them up and then crushing
them to make a powdery material.
During the smelting process, the
powder is heated above 500°C to
separate the metals. In the leaching
process, this material is treated with
chemicals such as hydrogen peroxide
and stronger acids.

With the help of citric acid
The Singapore scientists say this final
process can be eliminated. Instead,
they rely on oven-dried orange peels
that are ground into a powder and
then mixed with citric acid.
‘Using this mixture instead, we were
able to extract around 90% of the
lithium, cobalt, nickel and manganese
from used lithium-ion batteries,’
reports materials science and engi-
neering professor Dalton Tay. The
result is similar to that possible with

conventional chemical methods and
has the added benefit that the solid
residue left behind is non-toxic.
‘The key to the extraction lies in the
cellulose present in orange peels,’
explains Tay. Heat converts the cellu-
lose into sugars that enhance the
recovery of metals from battery waste
while antioxidants in the peels, such
as flavonoids and phenolic acids,
could be helping as well.

More Metals saved,
less food Wasted
The researchers used the recovered
metals to make lithium-ion batteries,
which store almost as much charge as
new batteries. The team is now work-
ing on improving the lifecycle of the
recycled batteries.
‘With this solution, we not only have
an answer to the problem of resource
depletion by keeping these precious
metals in use as much as possible but
also the problem of e-waste and food
waste – both a growing global crisis,’
Tay concludes.
The impact could be even bigger if

one considers that global orange pro-
duction exceeds 68 million tonnes per
year. Of this, 60% is used to create
juice leaving much of the orange,
notably the peel and pulp, to be dis-
carded, although a small portion is
used in the production of animal
feed.
Fruit waste can now finally serve a
high-tech application, says Professor
Madhavi Srinivasan, co-director of the
NTU’s Alliance for Research in Circular
Economy lab. ‘This approach could
also potentially be extended to other
types of cellulose-rich fruit and vege-
table waste, as well as lithium-ion bat-
tery types such as lithium iron phos-
phate and lithium nickel manganese
cobalt oxide.’
She concludes: ‘Current industrial
recycling processes of e-waste are
energy-intensive and emit harmful
pollutants and liquid waste. There is
an urgent need for eco-friendly meth-
ods as the volume of e-waste grows.
Our team has demonstrated that it is
possible to do so with biodegradable
substances.’

Share your innovative projects and
solutions with us! Mail to:
[email protected]