Subscribe
67recyclinginternational.com | May/June | 2020 Ferrous STEEL BLUES In Europe, coronavirus fears simmered in the background and prices fell signifi- cantly to US$ 81 per tonne as the virus began to impact steel businesses, resulting...
Read the entire page 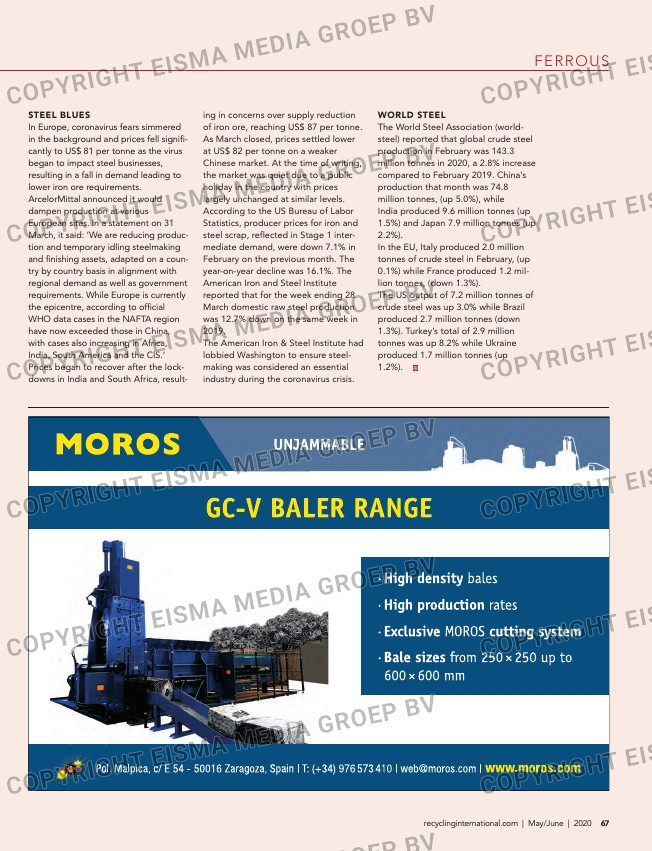 STEEL BLUES
In Europe, coronavirus fears simmered
in the background and prices fell signifi-
cantly to US$ 81 per tonne as the virus
began to impact steel businesses,
resulting in a fall in demand leading to
lower iron ore requirements.
ArcelorMittal announced it would
dampen production at various
European sites. In a statement on 31
March, it said: ‘We are reducing produc-
tion and temporary idling steelmaking
and finishing assets, adapted on a coun-
try by country basis in alignment with
regional demand as well as government
requirements. While Europe is currently
the epicentre, according to official
WHO data cases in the NAFTA region
have now exceeded those in China,
with cases also increasing in Africa,
India, South America and the CIS.’
Prices began to recover after the lock-
downs in India and South Africa, result-

ing in concerns over supply reduction
of iron ore, reaching US$ 87 per tonne.
As March closed, prices settled lower
at US$ 82 per tonne on a weaker
Chinese market. At the time of writing,
the market was quiet due to a public
holiday in the country with prices
largely unchanged at similar levels.
According to the US Bureau of Labor
Statistics, producer prices for iron and
steel scrap, reflected in Stage 1 inter-
mediate demand, were down 7.1% in
February on the previous month. The
year-on-year decline was 16.1%. The
American Iron and Steel Institute
reported that for the week ending 28
March domestic raw steel production
was 12.7% down on the same week in
2019.
The American Iron & Steel Institute had
lobbied Washington to ensure steel-
making was considered an essential
industry during the coronavirus crisis.