Subscribe
papermarket analysis little prospect of short-term price uplift Traders on both sides of the Atlantic remain gloomy about any short-term improvement in their global markets. The forecast for the recovered paper market in Europe do...
Read the entire page 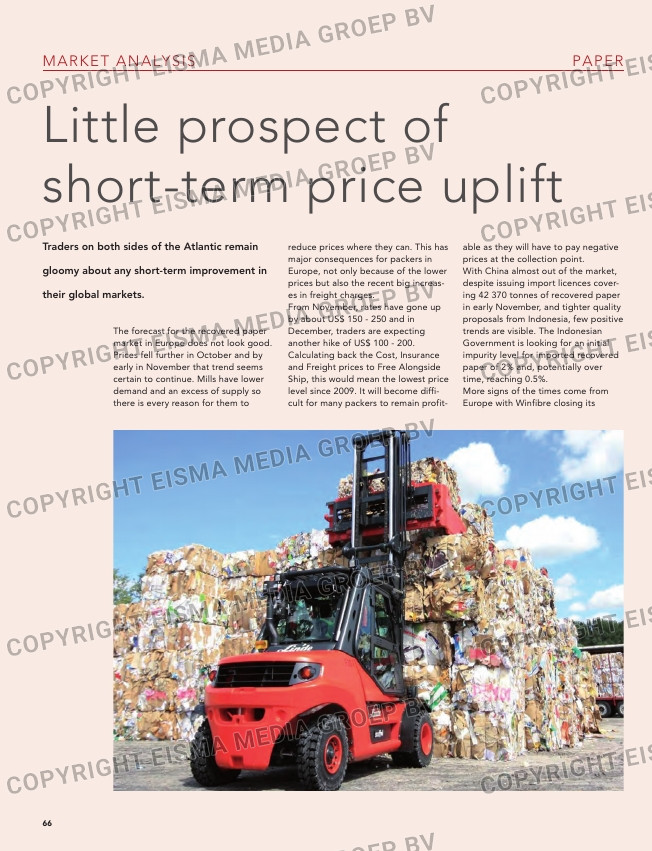 gloomy about any short-term improvement in

The forecast for the recovered paper
market in Europe does not look good.
Prices fell further in October and by
early in November that trend seems
certain to continue. Mills have lower
demand and an excess of supply so
there is every reason for them to

able as they will have to pay negative
prices at the collection point.
With China almost out of the market,
despite issuing import licences cover-
ing 42 370 tonnes of recovered paper
in early November, and tighter quality
proposals from Indonesia, few positive
trends are visible. The Indonesian
Government is looking for an initial
impurity level for imported recovered
paper of 2% and, potentially over
time, reaching 0.5%.
More signs of the times come from
Europe with Winfibre closing its

reduce prices where they can. This has
major consequences for packers in
Europe, not only because of the lower
prices but also the recent big increas-
es in freight charges.
From November, rates have gone up
by about US$ 150 – 250 and in
December, traders are expecting
another hike of US$ 100 – 200.
Calculating back the Cost, Insurance
and Freight prices to Free Alongside
Ship, this would mean the lowest price
level since 2009. It will become diffi-
cult for many packers to remain profit-

Rotterdam site. The company, known
as Mark Lyndon until this year, sup-
plied the Chinese paper maker Lee &
Man and procured feedstock across
Europe. ACN, the procurement arm of
Nine Dragons, also closed its
Rotterdam office recently.
Traders in North America say they
anticipate no general improvement in
recovered paper markets for the rest
of the year and there is little room for
prices to drop. White ledger prices
continued to trickle downward in
November as domestic and overseas
orders were tough to find.
‘This is the hardest I’ve ever had to
work to move white ledger,’ said a
broker in Chicago. Export orders for
sorted and manifold white ledger
were reported as low as US$ 190 FAS
off the West Coast, with somewhat
stronger numbers coming out of New
York. Sorted office paper (SOP),
meanwhile, remained weak but had